Skip to main content
Beth Eustis began her career in international education in 1988, having studied abroad herself at Durham University in England in 1984-85. She worked for 12 years as a study abroad advisor at Trinity College in Connecticut and then at the University of Maine before joining the college relations staff at IES Abroad in 2000. Beth manages college relations in New England for IES Abroad and also supervises a staff of six people across the United States. 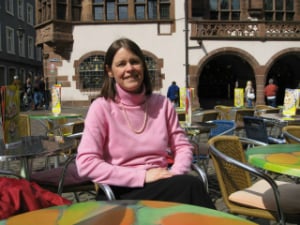 What position do you hold at IES Abroad? What has been your career path so far?

I am a College Relations Department Manager at IES Abroad, which means that I am one of two people in my department who supervises our College Relations Managers across the United States. I also manage IES Abroad’s college relations for many of our Consortium Member schools.

My first job in the field was as an Assistant Director in study abroad at Trinity College in Connecticut (also my alma mater). I was hired into the position two years after I graduated from college. I worked at Trinity for nine years before working as the sole Study Abroad Advisor at the University of Maine. In 2000, I accepted a position with IES Abroad in college relations, a job I love because I get to work with so many smart, dedicated people at various New England institutions.

Yes, I studied abroad in my junior year of college at Durham University in England. At the time, the direct enrollment program at Durham was an IES Abroad program. I entered college having never been outside the United States, but knowing that I wanted to study abroad for a full year. I had a double major in college in English Literature and Comparative Religions (focus on Asian religions), and my faculty advisor in Literature encouraged me to consider Durham for my year abroad.

It was a wonderful experience and no doubt led to my career in international education. U.S. students who were enrolled at Durham University had one-on-one tutorial instruction with top faculty, the same as the matriculated students. I loved being able to choose my assignments from the recommended reading list, preparing essays, and discussing them over a cup of tea with my tutor.

What is your favorite study abroad memory?

I have so many great memories from that year but probably my favorite memory is traveling during the spring break before the third term. Because Durham runs on a traditional trimester calendar, we had a three-week break in the spring before the reading period for final exams started.

I divided my break into two parts. During the first part of my break, I traveled on my own throughout the UK. I visited extended family I had never met in Scotland and then traveled north to Inverness where I stayed on a farm before heading down the west coast. I hiked through the Lake District in the spring, visiting the homes of Wordsworth, Coleridge, and other literary greats, which was magical for an English major! During the latter part of spring break, I rejoined several of my friends for a week-long trip to Greece, where we visited Athens, Olympia, Delphi, and Meteora.

I think language learning and cultural immersion are at the heart of what we do in international education. I remember when I was an undergraduate student I took a survey course in Asian religions, a class I loved so much that I added Comparative Religions as a second major.

At the beginning of that course, the professor told us the best way to approach the subject matter was to “step outside our cultural shoes,” and not to try to make sense of the subject by comparing it to the way we think in the west. That advice has stayed with me all these years, and I often tell students to approach their study abroad experience through that lens. When we learn to see the world in a different way, we become more open-minded and accepting of other ways of living, and we develop creative problem-solving skills.

Concerning language, I had studied French up to the literature level, but I did not become fluent in the language, and I did not keep up with my practice of French. That has always frustrated me, so this past spring I decided to start re-learning French. One evening a week I join a small class where we speak en français, haltingly but determinedly.

Which study abroad destination is most underrated?

I don’t know of any one study abroad destination that is underrated, but I do think far too often students gravitate toward the larger international cities or at least destinations familiar to them. I visited our program in Quito, Ecuador, several years ago and was impressed by how very different the culture is there from much of the rest of Latin America. When students ask me about IES Abroad programs, I suggest they consider some of our smaller sites, such as Siena, Nantes, Nagoya, or Quito, if they want an immersion experience.

Study abroad in Arles and discover this charming Provençal town. With a 2,000-year-old Roman arena at its center, Arles is famous for its beautiful architecture and its association with Van Gogh, Gauguin, Cézanne, and Picasso. Many dance, music, photography, theater, and folklore festivals take...