The Bahamas might not be the first country that comes to mind when you think about studying English abroad, but maybe it should be.

The islands have it all -- endless white sandy beaches, crystal clear waters, diverse marine life, and warm weather year round! Popular destinations like New Providence and Grand Bahama are bustling with activities and nightlife, while the Out Islands feature a more laid-back island lifestyle.

British settlements brought the English language to the islands in the early 18th century, and the unique island dialect, Bahamian English, remains today. You'll find English language programs in the Bahamas offered at all levels, from one-on-one tutoring to university courses and intensive language immersion. Due to the islands’ diverse ecology and marine life, many programs also incorporate a focus on marine biology or underwater activities like diving and snorkeling.

You'll find English language programs in the Bahamas offered at all levels, from one-on-one tutoring to university courses and intensive language immersion.

Why Learn English in the Bahamas?

English is one of the most commonly spoken languages in the world, and if you've landed on this guide, you likely don't need to be convinced of its importance to travelers, businesses, and communities around the world. It’s the official language of 53 countries, and a second, third, or fourth language in many more!

Standard British English has been used in the Bahamas since British settlers arrived in the early 18th century. While a dialect specific to the islands, Bahamian English, has developed over the years, standard English is still used today in media, business, and education.

For language learners who wish to learn English somewhere other than the United States or England, the crystal clear blue waters and endless white sandy beaches of the Bahamas offer a unique and picturesque alternative. From the popular nightclubs, beaches, and resorts of Nassau, to world-class diving in Lucayan National Park and Andros Barrier Reef, and the near-deserted beaches of The Abacos, there's something for everyone in this tropical paradise.

Qualifications will vary from course to course, so it's best to confirm requirements with the program provider you've chosen. You may need to prove your current English abilities through a proficiency test or transcripts, particularly if you're enrolling in an English course at the university level.

Make sure to be open and honest with your program provider about your English abilities, as it will allow them to make sure you're placed in the most appropriate course for you.

Popular Locations to Learn English in The Bahamas

Travel anywhere in the Bahamas and you'll find paradise. Over 700 islands and cays surrounded by crystal clear waters extend from just south of Florida's coast nearly all the way to Cuba. The Bahamas is a year-round destination, with average temperatures rarely dipping below 60 degrees Fahrenheit, though the best time to visit is typically the off-season, from roughly mid-April to mid-December.

New Providence and its capital, Nassau, is home to 80% of the Bahamian population. As the nation's only metropolitan area, Nassau is a combination of city living and tropical paradise, and is often considered the country's historic center.

Some of the most infamous pirates in history called Nassau home prior to British settlement. You'll find colonial architecture mixed in with stories of its colorful past, contrasted by modern beachside resorts and vibrant nightlife. Both the University of the Bahamas and the College of the Bahamas are located in Nassau.

Located in the north-eastern region of the island chain near New Providence, Grand Bahama is the second most populated island and where the second largest city in The Bahamas, Freeport, is located. It gets its name from the Spanish term gran bajamar ("great shallows"), referring to its sandbars and shallow reefs, a name that eventually became the basis for the Bahamas themselves.

Grand Bahama is home to incredible diving and exploration opportunities, particularly in Lucayan National Park, which houses one of the longest underwater cave systems in the world. The University of the Bahamas has a second campus in Freeport.

If you're looking for local charm and a more laid-back island lifestyle, Andros is the largest island of the Bahamas yet one of the least developed. You'll find miles and miles of deserted beaches and the world's third-largest barrier reef, measuring 190-miles long and extending almost 6,000 feet below the ocean.

The Abacos are comprised of a 120-mile long chain of islands that are mainly uninhabited. Though don't let that keep you away -- they're often titled "the real Bahamas" and are known for their beauty and more authentic Bahamian atmosphere.

Choosing an English Learning Program in The Bahamas

Choosing a language course is a difficult task -- the options can seem endless and can vary greatly in length and cost. It's important to consider what motivates you to learn English, how much time and money you're willing to spend abroad, and how you'd like to spend your time outside of the classroom.

If you're interested in cultural immersion, staying with a host family might be the best choice for you. If you're more independent, or interested in nightlife, you might be better suited to a program that allows you to live alone or with other students. Intensive language courses sometimes have more flexible schedules, and some programs allow you to combine your studies with activities like diving, snorkeling, or sailing. If college credit is a concern for you, combine language learning with studies at a Bahamian university.

Because many of the islands of the Bahamas are uninhabited, location might be a big factor in choosing the English language course that's right for you. Universities are located on the most populated islands of New Providence and Grand Bahama, though you may find language program providers scattered throughout less popular destinations.

Cultural Immersion in the Bahamas

While English is the official language of The Bahamas, you'll immediately notice the island's unique dialect spoken amongst the locals. Bahamian English is a mixture of British English, African influence, and island dialect -- you'll see this diversity reflected in the local culture as well.

Learning a language is more than just sitting in a classroom. Participating in a course with a cultural immersion component allows you to put what you've learned into practice, and allows you to connect more with the local culture and people.

If your course doesn't offer a cultural element, you can always take advantage of the People-to-People Experience offered by the Ministry of Tourism. It's a free program that pairs you with a Bahamian ambassador on an island of your choice who will show you the local culture, cuisine, and history.

English language programs can vary from a few weeks to a summer or semester, or up to a full academic year in length, and course costs will likely reflect this. Shorter intensive programs are often more cost-effective as you'll spend less time living abroad, while university courses will cost considerably more.

Expect to pay a few hundred dollars per week for intensive language courses and up to several thousand dollars per semester as a student at a university in the Bahamas.

Scholarships for Learning English in the Bahamas

There are many scholarships and grants available to assist with study abroad costs and can help cover anything from travel expenses to tuition, books, and room and board. Always check with your home university or program provider to see if they offer financial assistance to help with your studies.

Cost of Living in the Bahamas

Due to its popularity as a tourist destination, the Bahamas has a relatively high cost of living. Prices are on typically on par with those in the United States, but in some cases, the Bahamas is more expensive. Bahamian currency is held at the same level as the US dollar, and both are accepted on all islands.

Make sure you take the island’s high costs into account when choosing a program. Sometimes program fees cover the cost of tuition, accommodation, transportation, and even some meals and excursions. Others only include classroom instruction and course materials.

If you need to source your own accommodation or meals, consider eating and shopping at local markets and living outside of particularly touristy areas to save money. Rent for a single bedroom apartment can cost anywhere from $600-$1,000 per month. Fortunately, you won’t be far from the beach, regardless of where you live.

Most places recommend that you budget at least $120-$200 per day as a tourist in the Bahamas, though as a language student, you might be able to get by on a more modest budget. Mid-December to mid-April is high tourist season, and you’ll see the highest prices and heaviest crowds during this time.

Major islands, including New Providence and Grand Bahama, will have public transportation services -- most likely jitney buses. Routes typically run from early morning until around 7pm. Rates start at $1.50 and vary depending on the route. You’ll need exact change to pay the driver.

Visiting the Bahamas on a tourist visa is quite simple, and citizens of 120 countries, including EU and US citizens, can stay visa-free for up to 90 days. If you're from the U.K. or Canada, you can visit the Bahamas for up to eight months without a visa. Make sure you have a return ticket, valid passport confirmation of a local address, and proof of funds to support your stay.

Though temperatures in the Bahamas are warm year-round, the islands fall within the hurricane belt, which is a factor for travel to the islands. The Atlantic hurricane season runs from June to November, with peak season between August and October. While it shouldn’t be a worry, it’s worth keeping an eye on the National Hurricane Centre website for updates and warnings.

English Language Programs in the Bahamas 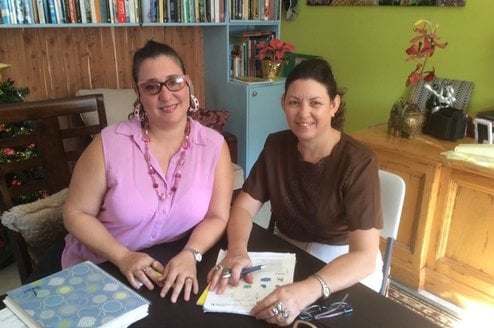 Bahamas
Only in The Bahamas for a quick business trip? Brush up on your...
View Program 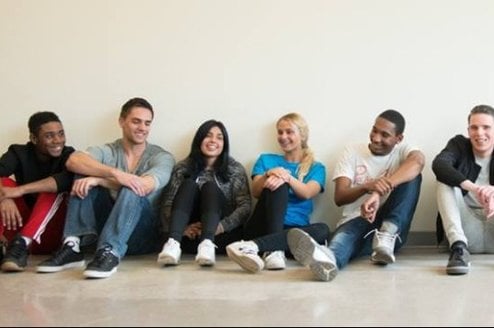 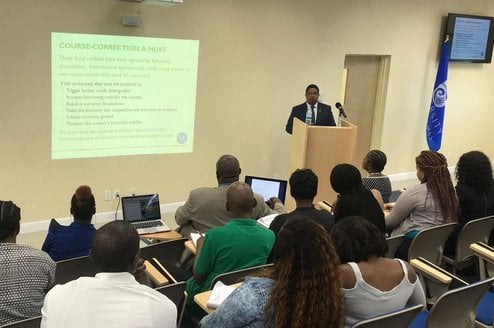 Bahamas
We offer the Bachelor of Arts in English and, in addition to this...
View Program