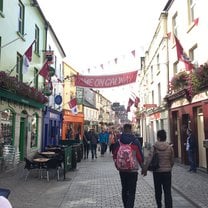 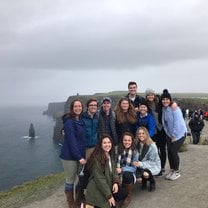 Cliffs of Moher with the crew 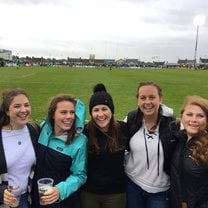 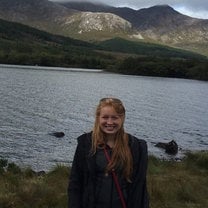 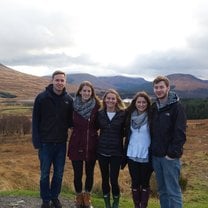 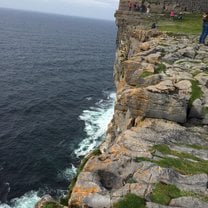 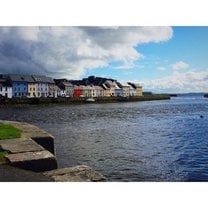 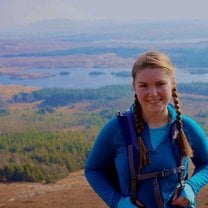 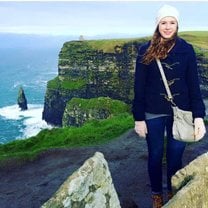 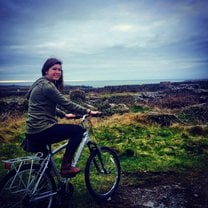 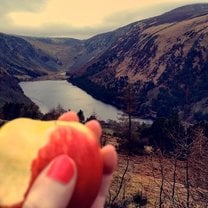 We are a research-led university that measures its success by our positive impact on the world around us. From human rights to the latest medical devices, our research confronts some of the most pressing issues of our time. 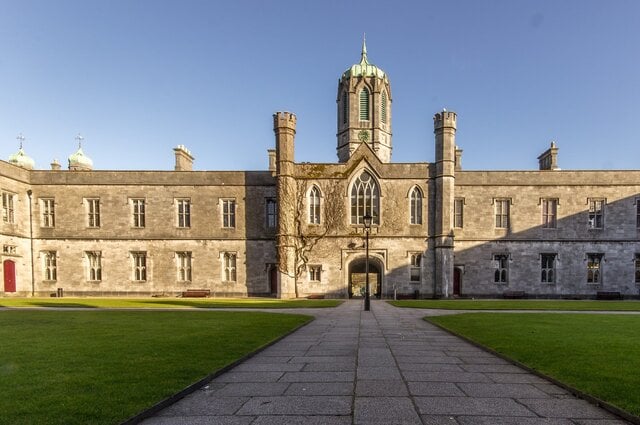 I actually left a note for the new American students that were going to be living in my room, I just gave them a few tips, places to see and eat, and what I loved about Galway. Thankfully, someone from Butler had previously gone to Galway and I was able to connect with her and she gave me some tips and advice, but I know that wasn't the case for everyone. This impacted my life post-program greatly. After I graduate I would love nothing more than to move abroad to work and Ireland has truly captured my heart. This program also allowed me to meet amazing people from across the US who will be lifetime friends and we are already all meeting up this summer. This program also reinforced my International Business major, I was able to see how Irish businesses operated and the behaviors of Irish consumers. I also was one of the few that didn't take like an Irish history or appreciation course, so I would recommend that incoming students try to take one of those types of classes because I feel like I really missed out. My favorite memory is all of is the pub scene, because we don't have that in America. The music, the friendly environment, and the people were just amazing and I felt like that's when I learned most about the Irish culture and it's something I miss about Ireland every day. Do you ever feel like you weren't meant to live in the place your in, then travel somewhere and find a new home? Well, that's exactly how I feel about Ireland and I have no doubt I will be back soon.

What would you improve about this program?
The main staffer is split between numerous schools all across Ireland and she does a fantastic job meeting will all groups, but I feel like ours was left out a little being so far away so maybe hiring someone else to split up the schools and give the kids more attention, activities, help would be nice. I would also suggest some sort of prior roommate pairing process besides just being random. Even just a simple few questions as part of the application could be useful, I saw a lot of poorly paired roommates which I think hurt some people's experiences. I also think adding a few more cultural activities would be nice. As a group, we tried to immerse ourselves but going to different events, but felt like we still missed out, I would have loved to get a crash course in Irish dancing or something like that. Overall all though the program was amazing and I recommend it to everyone.

Cliffs of Moher with the crew

My experience at NUIG was excellent from day one. I was able to take classes that I enjoyed, but more than that, I was encouraged and given the opportunity to experience Irish life and culture. While at NUIG, I was able to immerse myself in Irish day to day life through living with Irish roommates, attending NUIG events, and exploring all the favorite local get-together and activity spots of native students. Outside of Galway, I was grateful for the opportunity to explore the beautiful country that became like my home away from home.

When I went to NUIG I decided that I was going to take my business classes so that I could still graduate on time. I signed up for Human Resource Management, Marketing Principles, Media & Marketing Communications, Advanced Application Development, and Corporate Finance. I chose these courses because they transferred over to my home university for the classes that I needed to graduate. I had a great first day at NUIG, everyone was nice and helpful, and the professors were very welcoming of study abroad students. My favorite part about being at NUIG was seeing how another University taught and did things differently than mine. The professors were genuinely interested in your education and how they can help you. It was great to meet people from all across the world in my classes. I found Galway at my home university; I had known for years that I wanted to study abroad in Ireland and once I started doing my research I learned that NUIG had a business school and it would allow me to still graduate on time.

I chose NUIG for the opportunities it allowed me. The academics are strong and the city allowed me to connect with many different people. I found many friends through the clubs and societies and got to participate in activities that I wouldn’t have otherwise been able to partake in. The Mountaineering Club was a favourite of mine. It allowed me to practice one of my passions in a completely new landscape with new people and see Connemara in a unique way, as well as gain new skills. Some of my best memories were created with the clubs at NUIG.

Studying abroad in Galway was the most remarkable experience in my life thus far. I feel as though studying in Ireland has helped me to become more culturally educated, well rounded, resilient and understanding of the world. I am incredibly thankful for taking advantage of this opportunity and reflecting on it has been extremely rewarding. Besides the diverse educational benefits through broader perspectives, excitement of a new atmosphere and opportunity to travel much of Europe I am especially touched by and thankful for the people I have met from Ireland and from all over the globe. Some will be lifelong friendships that I value so much and wouldn’t have otherwise met these incredible individuals hadn’t I stepped outside of my comfort zone. I took a History seminar called “The First World War: Transnational Perspectives”, a Philosophy course, “History of the Irish Thought”, An Urban Geography course and a Microbial Infectious Disease course along with an online thesis seminar through my home University. The Faculty and students at NUIG were incredibly welcoming and kind. Professors are approachable and willing to help their students. At first there was a bit of a cultural learning curve and I needed to adjust myself to the University’s style of teaching, but quickly adapted. It wasn’t long before Galway felt like a second home. Galway city has a lovely charm to it and although I was thankful to have explored other cities such as London and Paris during my Study Abroad endeavors, it is safe to say that Ireland was my favorite and I would encourage other students who are filled with wanderlust to go visit and study there because it is truly a once in a lifetime experience. 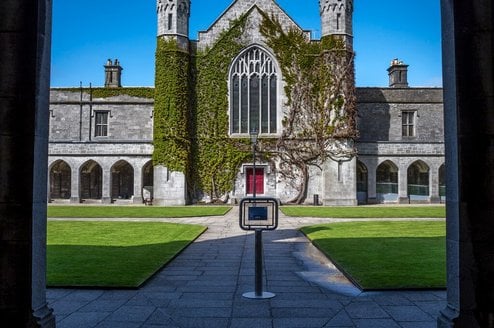 Undergraduate study at NUI Galway is based on innovative and research... 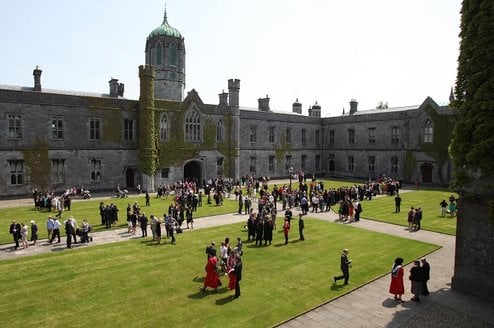 Postgraduate students at NUI Galway have the opportunity to immerse...

Ever since I was a little girl I have always wanted to visit Ireland. The culture seemed so cheery and bright compared to my fast-paced New England life.

On my Father's side of the family, (the Spillanes), we have heritage directly from Galway. The feeling of walking the streets of Galway City on the first day I arrived was surreal to me. Just to think that four generations back my ancestors may have walked the same streets, even drank coffee in the same shops maybe.

Another reason I chose this program was because of its location. I was able to travel to other European countries and it was much more affordable to do so from Ireland compared to flying from Boston.

I chose NUI Galway because after some research I discovered that although Dublin is an incredible city, Galway was said to have an authentic Irish charm to it, and that it certainly did.

Moving to Ireland was a very smooth process due to the supportive and helpful individuals who organize the study abroad program. It allowed me to enjoy the whole experience a lot more and to adjust much more easily since I didn't have to worry about anything major and most things were in place before arrival.

When I got off the plane we all were told to meet at a specific place where our group would take a bus from Shannon to Galway. Once we arrived, Ann Monahan helped us move into our apartments and gave us all sorts of helpful advice. We had a few days to settle in, adjust to the time difference, explore and simply figure things out before academics began.

Ann was extremely kind and approachable. She was almost a mother figure for all of us students. She organized many field trips for us including the Cliffs of Moher, Aran Islands, Guinness Factory, Connemara, and many others. We also had organized dinners and this helped me get to know everyone a bit better and was a remedy for any home sickness I had experienced.

As for the University, all of my professors were very personable and approachable. They want their students to succeed and that is evident. My Microbiology Professor specifically exhibited a notable deep passion for teaching and was kind enough to give me a book of his. 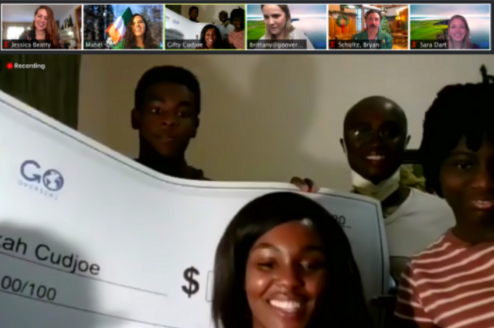 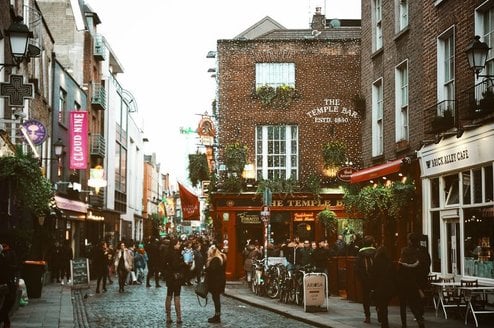 Warning: This Article Will Make You Want to Study in Ireland