I had a great experiences internship in Dalat, vietnam. My internship program is 2 weeks , I had an experiences in Pharmacy, Injection department and blood Laboratory. I learnt a lot new experiences in the blood laboratory and injection department, overall the whole internship journey is great! Chi Vi and Chi Dao accompany us and take good care of us throughout the whole internship, they are a great coordinator in Dalat. The staff in the clinic was really friendly and they are really willing to teach us and let us to practice to gain experiences . The accommodation for the volunteer is great , we stayed in the hotel which have cleaner to help us to clean every day , the environment is clean , nice and quiet , location of our hotel is really closed to the clinic , walking distance 10 mins every day . In this medical internship, it was a great experiences , I would recommend the medical/ pharmacy student to join the internship.

What would you improve about this program?
The pharmacy of the clinic should be more organised, because the student will not know what they should do in the pharmacy , and unfortunately, the student cannot learnt any new things or get a good experiences in the pharmacy department. 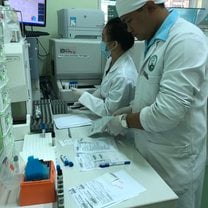 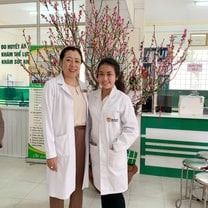 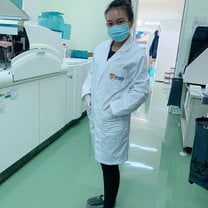 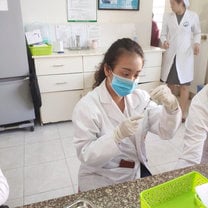 The reason that I chose ELI as my internship organizer was because of their emphasis on matching the skills of the intern to the skill-set required for the internship. It's easy enough to find organizations that will put the intern anywhere as long as they pay enough, but it's rare to find an organization that matches the need of the volunteer to the needs of the community, and at such an exceptionally affordable rate. ELI's application process was transparent and moved quickly. As a teacher, I could only volunteer for 6 weeks rather than the suggest 2+ month time commitment, and ELI worked hard to find me a placement regardless. I will definitely be traveling with ELI in the future!

First day we arrived to the volunteers house, everything was great. people, staff, and the lovely Didi. Now we are living, after a month, we believe that the house is now our home. Rooms are comfortable and cozy. Food is really nice and served with so much love. the rest of the house is always clean and available for us.

Talking about the medical program, We have chosen this program to see, learn and help as much as possible, and finally we have very useful, or needed.
We think, that maybe, this program should be focus on rural areas where our help may be more needed. Nevertheless, at the hospital people have received us with love.
After two weeks in this situation and due to our feeling of uselessness, we talked with the staff and they changed us to a school program one week and to another hospital the last one.
although the school was not our first option, we enjoyed a lot. On the other hand, the last hospital in Bhaktapur was great. We wish we could have been in this hospital since the first week as the make us feel we were really needed.

To conclude, we have to say that we are very happy with the experience, but we think that it has a very high price related to what we have really done {as we came with high expectations to help )

What would you improve about this program?
- As we have advanced level of medical techniques and knowledge, we think that we are much more useful doing than just watching. Maybe a rural area or a medical camp will have better option.
- As we have already said, we believe that if the price was a little bit lower, much more people would come here with no doubt.

The first 2 weeks I was sent to teach in a public school. It was an ok experience but I was disappointed as I had to teach kids of 3 years and I did more babysitting than teaching. However the second 2 weeks went better because we changed to teach students of 12 years and we actually teach a lot. We regret of not having had started in this second programme since the beginning.
Talking about the Eli staff I think they did not do as much as I paid for the programme, I am really disappointed with this fact. I hope this review helps to change their way of working making it more efficient.

What would you improve about this program?
Said it above

I had a great experience exploring the city, visiting the local temples and stupas, and learning more about the Nepali culture. The staff in Nepal were very welcoming and helpful for anything that were to come up. The students at the school were very lovable, and I enjoyed my time working with them. There were a variety of things to do, including trekking, spas, meditation retreats, paragliding, boating, and animal safari! This experience allowed me to meet new people during my trip, but also enjoy time to myself to explore the city.

The experience within the Human Rights field of Nepal was unique, and through this program I felt as if I was able to get a real experience of living and working in Nepal. Everyone within the house was very helpful, and I never ran out of things to do while in Nepal, whether it be travelling, sightseeing, zoga, or going out. Nepal is a country full of rich culture and some of the most kind people in the world, that greatly can enhance your volunteering experience.

What would you improve about this program?
The pre departure information could be more up to date and relevant to current life in Nepal, and communication about placements needs to be worked on so that participants know exactly what they will be doing before they arrive

My trip absolutely exceeded my expectations. I did not know very much about Nepal before I came but have been pleasantly surprised the more I have progressed through my program. I have been volunteering at a human rights organization called SASANE. It is the first time I have truly been able to put all the knowledge I have gained through my schooling into real work. SASANE as an organization is especially unique because it is run by victims of human trafficking, they made me feel at home as soon as I walked in the door. Another great part of my journey was the site seeing that was organized by our VolNepal, shouts out to my boy Shiba. The volunteer house was a great place to stay, our Didis were two of the kindest women that I have met in my life and the amount of gratitude and love I have for them is endless. The amazing people I have met wether they be other volunteers or the great people of Nepal will always have a special place in my heart. So thank you to everyone that made this life changing experience possible.

What would you improve about this program?
Overall my experience was excellent but there are a couple things that could be fixed. One of the things that could be improved about the program is that the volunteers should be allowed to stay out longer at night. I understand it is a safety hazard but as a 21 year old I feel as if I am responsible enough to stay out later than 9 pm. Although this is not a big deal it hindered some of the plans that we made while in the program. There were some other minor problems along the way but nothing we couldn't overcome and nothing that would change my view on the experience.

My time here in Nepal has been nothing short of fantastic! It's easy to describe how great the scenery is and how wonderful the people are, but the intangibles are also what make Nepal so great. Just the way people interact with you and the day to day life makes things constantly interesting. Definitely bring a mask and a fan, its hot and dusty. This program was very humbling and allowed me to get a different perspective of dentistry.

What would you improve about this program?
I would like for the dental program to be a little more hands on and be able to actual have a hand in procedures but I understand that's tough to incorporate and allow.

Great program and great experience! The staff are involved, experienced, and willing to help. There is always more to explore in the city. The work is meaningful but there is always time to travel to nearby attractions and cities to get to know the people and country in a different way.
I worked in both the school and monastery working with kiddos on developmental milestones, social skills, and learning basic English. I like how these program locations were primarily run by Nepali people, allowing you an opportunity to get to know locals within your field of interest. I gained valuable volunteer experience, but also connected with others and got to travel and see beautiful things. Great opportunity!

The way to Gorsyang was one filled with excitement and a little bit of fear. The mountainous roads were winding and the driver drove like a boss along the roads. Along the way there, we helped to push a van stuck in mud as well as waited for excavators to clear the road blocked by a recent landslide. All these were not part of the plan and brought about a sense of uncertainty and unease.

When we eventually reached Gorsyang, we met up with another volunteer who had been in the village for the past 2 months and she told us briefly about the workings of the village such as when meal times were, where to get water and where the toilets were. The first night was very rough for us as we did not have time to shower after a long dusty journey to the village and there were too many flies which prevented us from sleeping.

Eventually, we found out about using mosquito coils the next morning and that solved our insect problem. We then found out that the shower was actually just a running water source by the side of the road and we were quite shocked by that. We also got to know more about the various projects the school was working on from the previous volunteer and one of the teachers at the school.

In spite of the sharp change in living conditions, the people of the village welcomed us very warmly, the kids especially. We played carom with the locals and this kabaddi game with the kids. Besides teaching some basic computer skills, we also taught in some of the classes when some of the teachers were not around. It was through all these small interactions with them which let us know them better. We tried to show them, through photos, some of our past travel experience in the process show them more about the world and they brought us into their world by playing with us and sharing some of their food with us. While the time we spent with them was very short, I hoped that what we did will inspire them to seek out the wider world.

What would you improve about this program?
There could be a brief on the differences in living conditions to mentally prepare the participants. Ultimately, the participants still have to go through the experience to understand it.