Northeastern Brazil is a patchwork of contrasting elements: millionaires and peasants; abundant rainforests and drought-plagued agriculture; avant-garde architecture and slums all simultaneously coexist in this complex region.

Within this paradoxical context, this program examines the vast human and environmental challenges confronting northeast Brazil's populations and the impact of social inequities on economic growth. Students interact with different ethnic groups, including indigenous and Afro Brazilian populations, to gain insight into the challenges and benefits of implementing social change within a multicultural environment.

I grew up in ultra-rural northern New York state, and had never lived in a city in my life. The obvious choice was Fortaleza, a dangerous city of 3 million people in northeastern brazil... yeah, most people wouldn't say that's the obvious one, and to be completely honest it was a HARD semester in a lot of ways. But that's what i needed, because i sure grew a lot in those four months. This program, headed by the wonderful, thoughtful, kind, friendly, loving, forgetful, scatterbrained, passionate, openminded, brilliant Bill Calhoun, is kind of a wild one. please don't sign up for this thing if you aren't adventurous. you'll get the most out of it if you are committed to trying, trying, trying to learn portuguese, and starting up as many conversations as you can with as many brazilians as you can. There are random field trips that will tire you out socially, physically, emotionally -- but just think about how likely you are to get to experience such things in a foreign country again, and you'll realize that you're getting to do things no tourist would ever DREAM of doing -- living on a capoeira commune, spending four days on an MST settlement, casual rock-climbing in the serra with hippies, talking about racism with brilliant proud black brazilian university students, meeting government officials involved in land use and zoning for the city... like, those are a few of the things i found myself doing. Oh, touring the city of Salvador with a famous afro-brazilian activist and poet. Getting to take a class in capoeira an african philosophy with a literally world-famous capoeira mestre. I'm getting ahead of myself tho: the big thing with this program is that it's very very weird and different from the way you're probably used to living. Transportation around the city is tough; you will be sweating on buses a TON and you can't stay out late at night (I know; I was mugged) and you need to watch out for your friends at all times cause it's really not the safest place in the world. Your host parents are probably gonna try and micromanage your life because of this. host family experiences vary; mine was pretty great because she loved to talk to me. Try and talk to them as much as you can and remember to keep your MIND AND HEART OPEN because homestays are one of the main components of this program in my opinion. It's not an academic program, really; let's get that straight right now. It's about shifting your worldview. Learning to see this existence in another way, and noticing that people see it way differently from you a lot of the time. one of the biggest ways you'll do that is getting to know your hosts. my host mom and i ended up loving each other even though we REALLY disagree politically about a lot of things. also this is a great program if you're an INDEPENDENT guy or gal, because you will have time to roam and see the city and observe and learn and get to know folks and a LOT of the richness of this program is up to you.

What would you improve about this program?
oh, lots of ways probably: it could be better organized and they could potentially require you to know more portuguese (language barrier=real) but it's hard for me to say that cause i went in with NO portuguese and still had an amazing amazing experience. but if it was more organized that would mean Bill wasn't running it, and trust me, if you want this program you want Bill. he's incredible.
Did you find this review helpful?
Vote up! 0
Vote down! 0

this is just a snapshot of one of our classes at a capoeira commune in Valenca, near Salvador, Bahia -- called Kilombo Tenonde. we were learning about african philosophy and there were a bunch of students from the local university also there and evvveryone had amazing dreadlocks

if you look in the distance you can see the lights of downtown Fortaleza but this pic is taken from the boardwalk in Villa do Mar which is a peripheral working class neighborhood i lived in for my ISP project. the beaches fill up with soccer players in the evening and people exercise on the boardwalk and it's such a beautiful lively place

My host family was incredible. I adore them. That said, I think it's fair to note that a number of other students had issues with their host families. In some cases my perspective is that the students were at fault more than the parents. For example, some parents complained to the program because the students were not home enough and went out too frequently. I also think the parents talked to the program too soon.

At the same time, some students faced genuinely problematic situations in their host families. Several host families did not feed the students, and the students had to eat leftovers or pay extra to eat out at times and/or buy groceries for themselves. Most students lived within a 10 minute taxi ride of each other, and those who did not were isolated and had to pay significantly greater taxi fares to reach the entertainment districts. Students who lived more than a block or three from the beach could not walk alone after dark due to security issues, which left them feeling cooped up.

It seemed to me that the students who knew Portuguese beforehand had few issues with their host families. On the other hand, some of the students who made the least effort to learn Portuguese had relatively uncomfortable stays. Again, my host family experience was phenomenal. I could not have asked for a better situation.

My host family was great with food. I told them I like salad, so we (meaning me) ate salad at every meal! Brazilian food is good, especially at the self-service buffet restaurants. However, I still really missed non-Brazilian (American, Chinese, Indian, Thai, BBQ, Mexican) food by the end of the program because they are not available in Fortaleza.

How integrated did you feel with the local culture?

I love Brazil but I found interacting with locals difficult. We do not interact with local students and your options at making Brazilian friends your age is to 1. have a host sibling or family friend your age or 2. meet someone at a club (which as you know can get dicey). On the positive side, most students lived reasonably close to entertainment and the beach and were able to get out and see demonstrations and events there. We also visited and spent time with a series of NGO's, which was a spectacular aspect of the program. Still, I wish we had Brazilian buddies. I was extremely lonely in Brazil in spite of my wonderful host family and relatively strong Portuguese. I couldn't find a website or location to go to casually meet people. Club or bust.

How well were health issues addressed during the program?

My physical health was good. The weather (sunny, warm, breezy) certainly helped. Bring diarrhea pills. Mental health facilities are EXPENSIVE and scarce. They do not accept insurance. Expect to pay up to $200 per session. Since mental health professionals charge more per hour than people in the favelas make in a year, you won't have to wait too long for an appointment-few locals can afford the rates.

Brazil is unsafe. Expect that going in. SIT does a great job of warning us of safety concerns during orientation. They bring in three expats and have them discuss their security challenges. As with the host families, student experience with safety differed depending on their level of proficiency in Portuguese. Most of the students who were targeted were speaking English in public with other Americans after dark. Keep everything locked away at the SIT offices except your bus pass, cell phone, and a small amount of cash.

Our program had a 2:1 breakdown in favor of girls. None of the boys got targeted; to my knowledge, between a third and half of the girls were. Hello, sexism.

Tips: Hide important and expensive stuff (all electronics, because of Brazil's import tariffs) in your underpants. Put things in a plastic grocery bag. Go out with your host family. Even though your Portuguese may be rusty, do not speak English in public! It attracts attention. Try to appear disinterested but aware of your surroundings. Buy and wear local Brazilian textiles. They're cheap, comfy, and attract far less attention than colorful and expensive foreign clothes.

How easily were you able to live on a student's budget?

I was fortunate to live within walking distance of the school and a two minute taxi ride from the clubs. That kept my costs at a fraction of those who lived farther away. I was very conservative with my money and rarely went out. I ate lunch at the chain supermarket to keep my costs down. Even so, I went over budget. Salvador is twice as expensive as Fortaleza, so plan accordingly for your week-long stay there.

Do you have any general money-saving tips for future study abroad participants?

Eat at the local supermarket. Ask Oelito about the lunch special at a nearby restaurant. Stay with your host family for the duration of your ISP. Split cabs with students living nearby.

Brazil is home to 2,000+ beaches, 1,000+ islands, and 62 national parks, not to mention an array of carnivals, sporting events, and other city-wide events. Visit the Amazon and Iguacu Falls for a taste of nature, or opt for city life in Sao Paulo or Rio de Janeiro.

END_OF_DOCUMENT_TOKEN_TO_BE_REPLACED 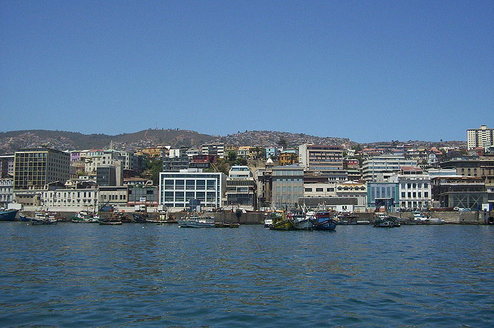 Explore Chile’s recent political and social history and discover how...