All Hands Volunteers launched Program Fiji in response to Cyclone Winston, which ravaged the islands of Fiji on 20 February 2016. Winds of 250 km per hour and storm surges 12m high decimated entire villages and killed 44 people. This category 5 cyclone was the strongest tropical cyclone to make landfall in Fiji on record.

We are currently based in the Tailevu and Ra Provinces, which were two of the most affected areas. We have built/rehabilitated over 200 toilets and 30 showers in several villages to ensure safe access for all. We have been delivering temporary structures to impact the largest population. We have also started implementing more permanent structures in several areas.

Volunteer applications for our DM12 Programs are now open! Join All Hands and Hearts as we work to rebuild communities affected by disasters. Our programs range from COVID-19 Relief work in Los Angeles to rebuilding homes in Louisiana to rebuilding schools in The Bahamas and rebuilding after Hurricanes Iota and Eta in Guatemala. Find out about our new and upcoming programs below.
Learn More
10 Rating
based on 5 reviews
Leave a Review
Showing 1 - 5 of 5

Whether you are young or old, working with All Hands will be a memorable experience and probably the best thing you have ever done. If you can get to Fiji you will be warmly welcomed and put to work as hard as you ever have for beautiful people. The work will be dirty as you are doing essential disaster recovery work. Stay for a long or short period. This is a very flexible. Great food. No fees, no charges. Unique. Apply now.

Working with All Hands Volunteers I around to various villages seeing the remote areas of Fiji building toilets and showers for people in need. We worked and ate with Fijians everyday. The organization is made up of good hearted, energetic people who give their all to help people who have suffered losses from cyclone Winston. Smetimes it eas hard dirty work, but it was always fun. One day everyone - volunteers & staff- hiked off the road 45 minutes to a remote settlement carrying materials to build toilets for people who had not been reached by anyone 5 months after the cyclone hit.
The organization works closely with the government and other NGO's to assess needs and provide vital services. I felt confident the work I did had a positive impact on people who really needed support. The tears and gratitude of the people we built with and for were confirmation our efforts were worthwhile. I'm not strong or experienced with building, but I learned a lot and felt like a valuable member of the team.

What would you improve about this program?
More donations would allow the organization to buy more materials and tools to help more people.
Did you find this review helpful?
Vote up! 0
Vote down! 0

My trip to Fiji with All Hands Volunteers was my first trip out of the country and it was the perfect situation for me. The island of Fiji is extraordinarily kind and helpful to begin with and the AHV staff just went above and beyond in their positions. The other volunteers were very nice and fun to be around. The work was very difficult but I would still 10/10 recommend.
The villages we worked in showed us the true culture of Fiji which was an experience I will always remember.

What would you improve about this program?
The tools and materials were sub par but that can only be remedied with more funding from donors.
Did you find this review helpful?
Vote up! 0
Vote down! 0

I have many cracker stories. And the best part is they all involve people from countries all over the world. Fijian culture to myself has been a massive eye opener, you go to villages and rural communities to help and rebuild what you can. But in exchange you receive a generous host that is willing to drop everything to help you with your task, cook pancakes and make tea and be your immediate friend. They have near to nothing but are prepared to give you everything they have really makes you reevaluate how we live back in western society.

What would you improve about this program?
More donations to extend the duration of the project. Therefore helping more villages and giving people overseas a life changing experience.
Did you find this review helpful?
Vote up! 0
Vote down! 0

All Hands Volunteers is an amazing organization, who genuinely keeps in mind what is best for the communities they are impacting. It has been incredible to work alongside them, and feel that what we're doing here is important. All the staff and other volunteers are wonderful and friendly, and you feel a part of once you arrive. It is an experience like no other, and I recommend it to anybody. You will have the time of your life!

If you love being outdoors and in the water, Fiji will be your new favorite place. Whether you are an adrenaline junky and want parasailing or shark feeding; or you just want to relax and snorkel in the pristine water, Fiji caters all travel styles.

All Hands and Hearts – Smart Response efficiently and effectively addresses the immediate and long-term needs of communities impacted by natural disasters. By listening to local people, and deploying our unique model of engaging volunteers to enable direct impact, we rebuild safe, resilient schools, homes and other community infrastructure....

END_OF_DOCUMENT_TOKEN_TO_BE_REPLACED 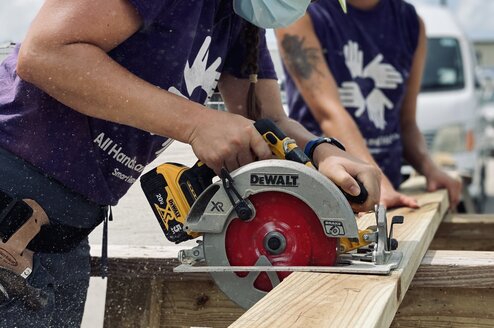 14 reviews
Wishlist
All Hands and Hearts

DM12 is a volunteer service commitment to communities impacted by...