Explore the lives of grassland animals, from the hedgehog to the Siberian ibex, to help conserve their wilderness home. You’ll travel to the research site by train, through the mountains of the north, to the semidesert steppe, giving you a chance to enjoy Mongolia’s vast landscapes that remain largely free of fences and paved roads. Once at the field site, you will track wildlife by collecting radio-telemetry data, capture, study, and release argali and ibex, hike to survey vegetation and wildlife behavior, track and record the location other wildlife of the area.

You'll hike four to six miles a day, accompanied by members of the project’s large, friendly team of Mongolian experts and students. You'll also get to visit nomadic families and see the traditional Mongolian lifestyle firsthand. 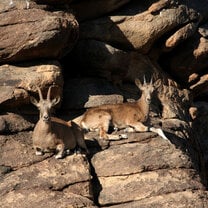 Mongolia was truly a unique experience. Certainly one of the best Earthwatch projects I have done. The Mongolian people are lovely and passionate about their country. The national park that we were in, Ikh Nart, was wonderful.

The rendezvous was at a guest house in Ulaanbaatar and it is definitely worth arriving early to spend at least a day in the city sightseeing.

Travelling to the camp involved a 7-8 hour train journey which was a wonderful way to see the countryside and a further hour and a half's drive on from the station. We were so well looked after by the project staff and I had no concerns about the remoteness of the area.

There were 6 volunteers and we were really lucky to be at the camp at the same time as the Assistant Curator for Birds at Denver Zoo who was there to try to capture Cinereous vultures. Mary-Jo had 4 radio transmitters that she wanted to attach to the backs of 4 adult vultures. Capture was never going to be easy and I have to say that vultures are wise birds! We spent many hours sitting waiting near nest sites but were not successful. One day we were out for 14 hours.

As well as the vultures there is research being done on the Argali sheep, snakes, Lesser Kestrals, small mammals and hedgehogs. There was plenty of bird life too. One evening we had a talk by the hedgehog researcher and and watched as he fitted a long earred hedgehog with a radio transmitter.

Life around camp was very civilised. Our Gers were very comfortable and wood burning stoves were lit on the coldest nights. Showers were taken in the afternoon/evening using sun showers. Everyone ate together in the dinning room/classroom Ger and there was certainly no risk of going hungry. Boiling water was available all day for hot drinks as well as snacks.

I wouldn't hesitate to recommend this project to anyone and would love to go back for the argali round-up in the future. 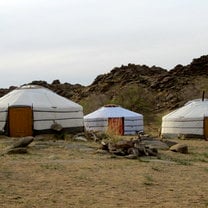 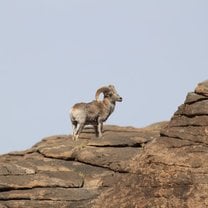 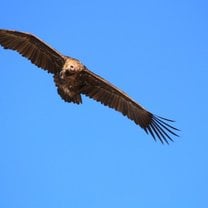 The long train ride snakes away from the bustle of grey concrete Ulaanbaatar into the Mongolia of the imagination, dotted with the occasional ger that marks civilization--we call them yurts. Lazy hours on the train give way to a bucking ride in The Boneshaker, a weathered grey van that can travel over ANYTHING to camp, a collection of gers that will be our home, nestled amidst outcroppings of tall rocks with a stream rustling through, our only source of water.
Earthwatch is not for the slothful. There are armies of traps to be laid, and baited and checked twice daily. There are Argali sheep to be monitored, which means hiking kilometers up and down over rocky terrain, accompanied by a youthful Mongolian scout who is years younger and much fitter than I have ever been. Some teams actually snare these sheep to mark them, taking part in an old fashioned roundup with Mongolians on motorcycles as well as the traditional horses. Radio tracking hedgehogs sound cute and pastoral? Not when the little guy in question is a traveler, moving 10 km in one night. There are plants to be surveyed, mysterious clumps with Latin names, and counted in Mongolian! Sometimes there are young condors to be measured; some babies! The wingspan matches or exceeds the spread of my arms! After all this, there are sun showers to be had, and the absolute quiet of the Gobi desert. Occasionally we visit our neighbors, kilometers away, with their herd of horses and spotless ger, which can be dismantled quickly when they move on. In a nod to the 21st century, there are also motorcycles, the occasional pickup truck, one solar panel and a satellite dish. The scientists and staff are outstanding. Smiling pantomime is sometimes the only means of communication. Nonetheless, the meals are tasty, based on fresh goat prepared in every possible way, and the fellowship amazing. No phone, no TV, and no internet mean that we talk, we sing together, we play games, and we enjoy a true person to person experience, sharing our diverse cultures.

What would you improve about this program?
Some people will find the outhouse experience, plus the daily drawing and filtering of water off putting. A vegetarian would have a tough time. I relished the solitude of the Research Station and the challenge of the physical activity. A key person who normally would have done much of the translation was missing from my trip because of illness. This may have made things easier had she been there, but as an experienced traveler, enthusiastic to learn and participate, one learns to cope and ultimately interact in unexpected ways. As it turned out, the experience was incredibly varied. Some might thrive on routine, but one of the most exciting things about science is the variety of the experience. I am not a scientist by trade and I had a spectacular time.
15 people found this review helpful.
Helpful  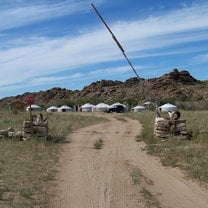 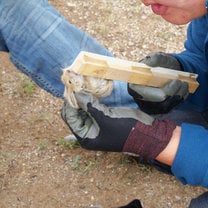 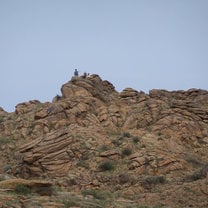 Was the program physically demanding?

Program
Wildlife of the Mongolian Steppe
Claire Doe is in her late forties and based in the South of England. She has been a Sales Agent in the retail/consumer sector for over 20 years representing luxury accessory brands and beauty products. She loves nature and enjoys photographing it. She is passionate about Earthwatch having joined a project a year for the last 10 years. I chose the Mongolian project, Wildlife of the Mongolian Steppe, because I wanted to experience a part of the world that I hadn't visited before. I wanted to have the opportunity to immerse myself in a culture and way of life that I had only ever seen in TV documentaries, a way of life that seemed a million miles away from my own. To be surrounded by wonderful wildlife was also very attractive.

Do it! Everyone should join at least one Earthwatch expedition in their lifetime and I would not hesitate to recommend the trips to anyone. Earthwatch gives ordinary people the opportunity to not only have amazing and unique experiences but also to take an active part in conservation around the world.

Earthwatch is a worldwide non-profit organization unlocking the potential in people and the environment. Since 1971, Earthwatch has connected volunteers and partners with scientists undertaking vital field research around the globe. Everybody who works with Earthwatch, from students and teachers, to companies, retirees, and other individuals make a... END_OF_DOCUMENT_TOKEN_TO_BE_REPLACED 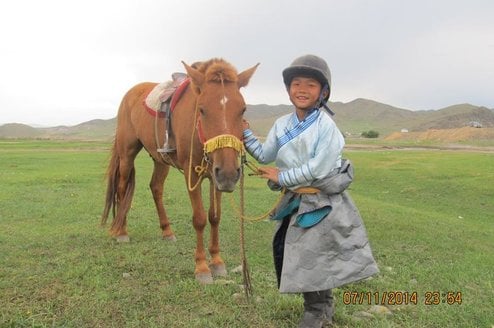 Mongolia
Stepperiders has been working with volunteers for over 10 years now...
View Program