Our director John with the new rescue Bui

We need people who love animals and want to support us in rescues, rehabilitation, and medical treatments, as well as enrichment programs, for them.

Our volunteer program as a wildlife caretaker is very important in the project progress. We require people who mainly have a deep love for animals, no previous studies are required, people who have more experience will be designate to certain types of animals and those who do not have much experience will be responsible for other types of animals, the common quality should be to have a lot of patience and be very observant, the time the volunteer spend feeding and taking care of them is essential for the project. The wildlife caretakers are the main and first source of information for monitoring the physical and emotional health of the animals in our care.

Volunteer and enjoy the close relationship between wildlife and their natural habitat, also work closely together with specialists and gain new knowledge about wildlife!

If you love working with animals, then this us the place or you. You get the sense that the first priority of those running it is for the animals.

About an hour south of Iquitos by collectivo (minibus) I would say it is well worth the journey, even if this is the only thing you can do in Iqutios. You learn so much more - about the animals, about the amazon and the culture - than you would on a tour.

Day to day you are expected to prepare meals for the animals, change water, clean eating areas, clean the manatee pool, prepare milk for the babys. The work is tough enough, nothing unbearable, but the heat and the mosquitos mean it's not a project for the faint hearted.

Rooms and showers are basic, no air con but the rooms have a fan. There is a hammock area for down time between animals' meals/other work with a projector if you wanted to watch a film in the evening. The wifi is about as good as it gets for Iquitos (in fact better than hotels in the city). Food is prepared for you three times a day. They can cater for veggie/vegan and I always found it was pretty tasty.

Compared to other centres in the area I have been told about, RAREC is the only one which doesn't tend to open the doors for hoards of tourists to come and pet the animals. This is in order to protect from infection - manatees and baby monkeys are particularly susceptible. I was also told by someone else that it is the only centre in the area which actually works towards release of the animals. They are careful about the diets - ensuring they are all getting the correct nutrients - there is an onsite biologist and they consult with vets, dieticians etc whenever there is a query over an animal. The animals are regularly monitored and, as is the plan upon release of two of the manatees next month they continue to monitor them and also track them to gather information for research.

While I was there there were also some biology students from the university of Iquitos doing a placement, which was great as it also meant you could practice your Spanish while working with them, if that's something you'd like to do.

I can't recommend this place highly enough, if you're willing to sweat through most of the day and forgo a hot shower then it is well worth it. I am so grateful to John and Ingrid for having me there and teaching me so much during my time.

If you did this all over again, what's one thing you would change?
Bring more long trousers (which would get mucky), to keep mosquitoes away and long socks for the gun boots.

If you love working with animals, then this us the place or you. You get the sense that the first priority of those running it is for the animals.

About an hour south of Iquitos by collectivo (minibus) I would say it is well worth the journey, even if this is the only thing you can do in Iqutios. You learn so much more - about the animals, about the amazon and the culture - than you would on a tour.

Day to day you are expected to prepare meals for the animals, change water, clean eating areas, clean the manatee pool, prepare milk for the babys. The work is tough enough, nothing unbearable, but the heat and the mosquitos mean it's not a project for the faint hearted.

If you did this all over again, what's one thing you would change?
Bring more loose trousers which I didn't care about and protected me from moquitoes. And long socks to stop the gun boots from rubbing.

I stayed at RAREC for 2 weeks in the beginning of January and what an amazing way to start the new year. I meet so many cool people and got to work with different animals. If you are looking to volunteer with animals like Woolly Monkeys or Baby manatees and more, also if you're ready to get your hands dirty, this is the perfect program for you. I also recommend taking a day off and exploring to city of Iquitos and surrounding areas. Experience the jungle, the culture, and the food. Be open to new things and you'll have an AMAZING time in RAREC!

What is your advice to future travelers on this program?
Be ready to get your hands dirty and don't even bother bring facial serums or lotions, you'll sweat it off 2 minutes later. However, don't forget your SPF!

RAREC was an amazing experience and I would recommend it to anyone who would like to care for animals while raising awareness at the same time. This organization cares deeply for the welfare of its animals and strives every day to make sure that each and every animal is well cared for. By volunteering with RAREC, you’ll meet the incredible local staff as well as fellow volunteers from all over the world working on the same goal of amazon conservation. During my stay I was fortunate enough to prepare/feed monkeys, feed baby manatees, look after a baby sloth, train and provide enrichment for the baby giant river otter, and so much more! You won’t regret it!

What is your advice to future travelers on this program?
Take advantage of all your opportunities whether it’s caring for the animals or traveling and getting to know the locals and their culture

My 12 year old daughter and I volunteered with RAREC in February of 2019 and we are making our return trip this coming weekend. This program made such a profound impact on myself and my daughter, that we are likely to make our visits to RAREC part of our life for decades to come. Interacting with the animals, the people of Iquitos, and the staff at RAREC is inspiring, deeply moving, and refreshing for the heart. We took part in community activism, environmental education programs and English language education for the locals, wildlife rehabilitation and enrichment, and this trip we will even be part of a release of one of the RAREC's rescues back to the wild. Being among the animals, in their natural environment and experiencing the truly rich culture of the people of Iquitos is a lifetime experience and if you have the opportunity to experience it, I wouldn't miss out! John and Kathya and excellent hosts, and make you feel like part of the RAREC family.

What would you improve about this program?
Nothing. The program is perfect in it's pure and unaltered form.

Jungle walk with Mario and Cha Cha to teach foraging

Beautiful sloth hanging out in the tree :)

I volunteered here twice, in 2018 and 2019 and spent a total of 2 months. I recommend the experience to absolutely anyone who loves being around animals and nature!

It was my first time voluteering abroad and, though I didn't know what to expect, it was every bit what I had hoped for. It gave me the opportunity to get close to and interact with wildlife here in a way you rarely get the change to and see just how smart, funny and full of character these animals are. It has also given me the opportunity to experience the real local community of Peru, know the Amazon, it’s beaches and the jungle in a unique way.

From an impact point of view, what I appreciated most about the project is that there is a long term goal of befriending the local community and changing their mindset, so people will stop hunting wild animals. From what I've seen, they do this through educational programs for children, offering basic medical checkups to local people and trying to give them alternatives for earning money (such as hand made keychains). I was amazed by the vision of it.

The entire team working here is very friendly, attentive to volunteer's needs and most of all dedicated to what they do and they deserve every recognition for the hard work!
Sending all my love to my all time favorite Daniel, the giant river otter! :-)

I volunteered at RAREC in January 2020!
I had heard great things about RAREC from a friend who worked there earlier. I can only confirm it’s a great place and I wish I could’ve stayed longer. To see the passion for saving the animals, the will to educate visitors but also a vision of building a school for the local kids is just so beautiful.
I put an 8 on the safety because you are working with wild animals, and they might feel threatened or unsafe if given the reason to do so. Listen to the staff at RAREC and everything will be fine. The accommodation is great, the food is delicious and the RAREC staff is humble and totally awesome. Ingrid, the biologist who was organizing and “onsite manager” really cares about the animals and you could tell that this is her passion, and she’s really good at it. It’s more than a job, it is a life changing decision and I appreciate everything she does. She knows the animals, listen to her and you’re safe.
For me, this was an easy choice when going to the Peruvian Amazon. To put your money in the right hands, to be able to help out. There is too much of an industry around the world and especially this area, where animals like monkeys, manatees etc are being sold for food and also for the “simple” reason - money.
I really wish to come back as soon as I can and I would recommend anyone caring for the voiceless, in this case monkeys, manatees, otters, parrots & sloths to join the team for some time and help out.
To everybody at RAREC - Thank you for what you are doing

What is your advice to future travelers on this program?
Bring insect repellent because the mosquitoes are a struggle. You’re in the jungle! (Just try not to wear it when close to the animals)

RAREC (Rainforest Awareness Rescue Education Center). In our approach to the many issues the Amazon is currently facing, environmental education is one of our main pillars of action. All while we rescue, rehabilitate and release the voiceless. Come and be apart of Amazon conservation. 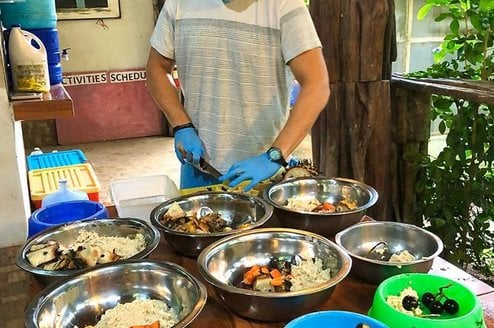 Save to Wishlist
RAREC

Join The Rainforest Awareness Rescue and Education Center and be part...