Skip to main content
Rachel is a New England native (Connecticut, to be exact) who majored in English Literature and globetrotting. She's studied abroad in Rome, Italy, served in Peace Corps and AmeriCorps, and taught English to elementary school enfants in the south of France. She's also a sucker for brownies, puppies, and good books on rainy days. 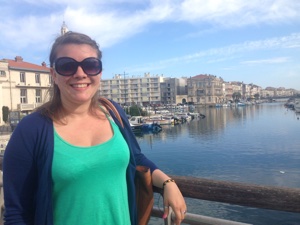 I picked TAPIF because, after serving in Peace Corps Guinea and AmeriCorps in Minneapolis, MN, I wanted to keep teaching and traveling, but I really, really wanted to work on my French. This program gave me the best of everything, especially because my contract was only for 12 hours a week. I had plenty of time to take French classes, binge watch TV shows in French, and travel!

Just do it. It's terrifying and exhilarating and you won't know what you're doing 99% of the time, but this is the only time in your life where that will be ok. Just do it and be free to do whatever you want while you're gone!

I think the key is to be flexible. Things won't always happen as you want or expect them to, but that's a part of the experience. Planning sometimes means nothing. Go with the flow and where you end up is just exciting as where you thought you were going to end up.

I would also warn again making friends with too many English speakers. Yes, it's easy and comfortable, but you are there for a cultural exchange as much as work. Make friends with your teachers, roommates, and just about anyone else. But don't lock yourself into speaking English all the time with native English speaking friends.

I definitely have a few of these.. It could be the time I took a train to Toulouse and saw Stromae in concert. Or the time I went to Strasbourg for all the beautiful Christmas markets. But I think it might be the time my dad got pick-pocketed in a Parisan metro. (Now you're probably wondering why this is my favorite.. hang tight, we're getting there.)

My dad came to visit me at the end very end of my stay in France on what would be his first ever trip outside of the United States. He originally wanted to go straight to Rome and skip France altogether, but I convinced him that Paris was worth it and that we should go for at least a few days before flying to Rome. So, he obliged.

Less than 24 hours after he touched down in Paris, we were sight seeing in Montmartre. We hopped on the metro to head back to the Eiffel Tower quartier where we were staying. As we were stepping off the platform, all I heard was my dad mumble, "Oh, %@#$". And voila, c'était fini. His wallet, including driver's license, credit cards, some US cash and euros, gone.

After a few moments of panic, we headed back to our rented apartment. After my dad had called and cancelled all his credit cards and we transferred some of his money to my bank account. Then he turned to me and said, "You know what, screw it. I'm not going to let this ruin my first trip out of the US. Let's go have some fun". I don't think I've ever been more proud of my father.

And we really did have so much fun! We reminisce about that trip and all the wine we drank all the time. Ultimately, that pick-pocketing didn't hurt us and it's definitely not the first thing we think about when we think of that trip.

But how did you get used to the French being stinky, or eating snails and frog legs, or smoking everywhere and being mean?

Leave your stereotypes and expectations at the airport! I think this was one of the hardest things for me. I had this image of what France was, and because of that, I definitely spent more time breaking down those stereotypes than I did experiencing them. Once I opened my mind, I noticed that I always had a lot more fun and was way more comfortable with my surroundings.

(FYI, the French don't stink, I never ate frog legs or snails, OK people do smoke a lot, and some people are mean wherever you go in the world.)

Teach English in France! Are you ready to expand your cultural horizons and share your language and culture with French students? The Teaching Assistant Program in France offers you the opportunity to work in France for 7 months, teaching English to French students of all ages. Each year, nearly 1...