Skip to main content
Briana Cox is a first-generation college student and rising senior at Swarthmore College in Philadelphia. She studies Japanese and cognitive science and is obsessed with learning about language. 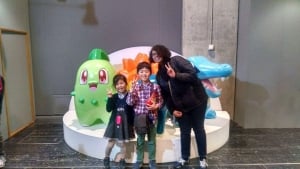 I chose my program because it offered a strong system of support for its students as well as many opportunities for travel and cultural immersion. I was also very interested in studying abroad in Nagoya since living in a smaller city would allow me to better understand typical life in Japan.

IES provided a separate orientation that took place a week before my studies at the Center for Japanese Studies at Nanzan began, and it was very helpful in dealing with the initial cultural shock and meeting some of the people I would be studying with. It also had regular field trips to other relevant cities and towns and many cultural outings that kept us in consistent contact with the program representatives.

I organized a handful of day trips and longer excursions to other cities on my own after becoming more comfortable with public transportation. We were typically left to our own devices with budgeting as well. While you could contact the program representatives at any time with questions or concerns about your time in the country and any problems you had, I personally preferred to contend with the smaller issues on my own.

Take advantage of your time in the country! Nagoya is a wonderful city on its own, but it's also centrally located: Osaka and Kyoto aren't very far away by bus or train, not to mention the smaller locales in between. You'll probably find yourself with a good deal of free time, so you should take advantage of it while also not being too afraid to speak in Japanese to the natives. That's the language you're there to improve, after all.

After a few weeks of living in Nagoya, I found it oddly easy to fall into a steady routine of school, work, and leisure time. The average day for the typical Nanzan student involves a commute to campus (for those with home stays) that isn't too terrible in retrospect but is always perfectly appropriate to complain about in the moment. There are language courses every weekday morning for a few hours, and the rest of your schedule is up to you and your academic advisors. Classes, even the language courses, are fairly lax (especially with a rigorous American university to compare them to), and while the typical day does entail some studying for the perpetual kanji quiz on the horizon, I and many other people spent a good deal of time exploring Nagoya or hanging around its more bustling parts after classes.

I was simply afraid of being lost and isolated in a foreign country. While I had been overseas once before, it was for a comparatively brief amount of time and in a country that was familiar enough despite technically still being foreign. Japan was a different ballpark. My time in Japan, though, really helped me become a more self-sustaining and confident person. Asia has the potential to be incredibly alienating if you let it, but it also has the potential to help you become a more independent person who dives into things you're unfamiliar with and just sees how it works out. Succeeding at that is one of the best feelings in the world. Successfully navigating the red tape of applying for health insurance at what is essentially the Japanese DMV is, at the very least, a confidence booster.

Was practicing your Japanese outside of class helpful?

I've mentioned this already, but it warrants repeating. Use the language. Speaking Japanese outside of class is intimidating and embarrassing if mistakes are made. That is understandable. But it's not in the culture of Japan to draw attention to something embarrassing; and it is in the culture of Japan to help people who help themselves. If you go through the effort of trying to speak Japanese, in my experience, people will appreciate it and treat you very well and help you if you make mistakes. Putting forth the effort is well worth it.

Yearning to immerse yourself in Japanese language and history near the heart of cultural Japan? The fourth-largest city and the hub of Japanese manufacturing industries in Japan has plenty of festivals, traditional arts, and sports to enjoy. Be sure to visit Nagoya Castle and Atsuta Shrine, two...