Skip to main content
Sucheta Rawal was born & raised in India, & moved to the US when she was 17 years old. She received her BBA & MS Finance from Georgia State University, after which she worked as an investment banker & research consultant. She soon realized, she had a greater calling outside of the cubicle & transitioned into a full time food & travel writer. Sucheta also teaches international cooking classes around US, & has founded a nonprofit, Go Eat Give, where she encourages others to learn about different cultures through food, travel & community service. Follow her adventures from around the world on www.goeatgive.com.

Why did you decide to volunteer abroad with CCS in Morocco? 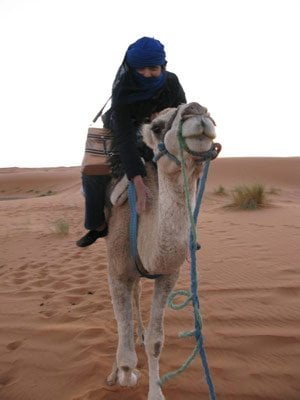 Sucheta: This was my second volunteer abroad trip. I have always been intrigued by the colorful culture and scenery of Morocco, as I had seen in photos. This was a fun trip where again, I wanted to incorporate giving abroad. I went with Cross Cultural Solutions and spent two weeks in Rabat, the capital where I taught English at a women’s empowerment center.

What made your volunteer abroad experience unique and special?

Sucheta: Morocco is a fun country with so much to see and do. What made the trip so special is that I found a story in the paper about an Army wife, Leslie who was traveling to Morocco for the same program. I contacted the journalist & got in touch with Leslie. We talked on the phone and instantly became friends. She lived in Fort Benning and I in Atlanta, so we decided to meet up for dinner. After that, we organized a fundraiser together and planned the entire trip. We flew from Atlanta together, traveled around Morocco and were roommates the entire time. We got along very well and had a wonderful time. This was her first trip outside the US so I sort of acted as her foreign guide. It was so much more fun than traveling alone and the best part is, we had hardly known each other before.

Sucheta: The trip to Morocco changed my focus professionally. I was writing a blog “Girls to Morocco” during my journey there, but after a few months I felt like I really wanted to share these experiences with a larger audience. I started a movement, Go Eat Give, that encourages others to learn about different cultures through food and community service. I quit my job as a consultant and made a career change. Now, I have a blog www.goeatgive.com where I share my stories from around the world. I also freelance for magazines, teach international cooking classes and speak about volunteer traveling at travel shows. 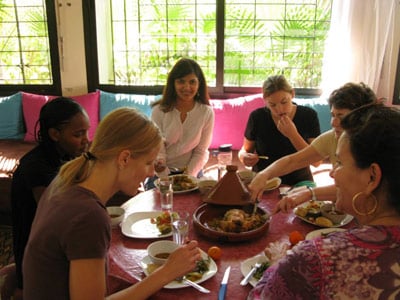 Morning: Typical morning I would wake up around 7-7:30, one of the last one’s to do so as I am not a morning person. We had 22 people at the house, so had to take turns using the 3-4 bathrooms. After getting ready, I would head to the dining room for breakfast, which was laid out as a buffet. We had 1 typical Moroccan dish (cake or msemenn), bread, eggs, yogurt, jam, butter, cheese & tea. After rushing through breakfast, each of the volunteers would head to their respective assignments. Mine was at the La Feminin Pluriel women’s empowerment center, where I taught English to a class of 5-15 students. A van would haul a bunch of us, so we had to make a few stops to drop others at the children hospital, center for street kids & a university. My class was from 10:30am & lasted hour & a half.

Afternoon: After the assignment, we were picked up by the CCS van & hauled back to the home base, where we had a delicious traditional Moroccan buffet lunch. This was good time to talk with other volunteers & hear about their placements, interactions with the locals, etc. We generally had an hour of free time in the afternoon, which I used to check emails & call home. Sometimes I would walk over to the grocery store or the salon to run personal errands. Around 2pm, we would have an organized activity by CCS. Each day was different. We had cooking class, language class, local dancers & tours to the medina & fort. The excursions were great as the local staff member would act as our guide & tell us about the history of the area. Local transportation was provided & sometimes a few of us would stay on in the city for longer. Taxis were cheap in Rabat & 2-3 of the volunteers would share a cab for $2 for a ride back home. 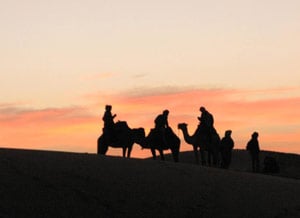 Evening: We were served dinner early (around 7pm) at the home base. There was always soup, bread, a variety of salads, 3-4 entrees & fruit. I found that Moroccan cuisine is very healthy & includes many vegetables. We would generally have 1 meat entrée. Other volunteers visiting from western countries said they were eating a lot but losing weight, since the food was so fresh & healthy. It was again, communal & we all sat around little round tables chatting & eating. After dinner, some of us would form small groups & head out, either to go shopping at the mall or the medina, or take a walk around the neighborhood & visit a gelato shop for dessert. There was no television at the home base, so a lot of people read books, surfed on their laptops, played board gamed & talked to each other. I would generally do my writing in the night & upload blog posts before going to sleep.

Highlights: One of the highlights was the dessert safari into the Sahara. About 15 of us rented a van & a tour guide for the weekend. We drove for 10 hours, going through rosemary fields, open grasslands, barren mountains, oasis & sandy desserts. I didn’t know Morocco offered such varied landscapes! Then we got on camel backs at a little town, Merzouga to go into Erg Chebbi (Sahara Desert) at sunset. There we camped overnight under the most beautiful star studded sky I have ever seen. We had dinner there & danced with the natives. At 5am in the morning, we rode the camels back watching the sunrise over the horizon of the orange-brown dessert.

This was my first time camping in my life & I was debating the entire time if I wanted to stay overnight or just return to the hotel at Merzouga. I slept in my clothes & only had a small backpack for the night. There was 1 toilet a bit away from the tents & only flashlights for light. I slept in a tent with 3 other people, but a lot of the volunteers slept outside. We didn’t shower the entire weekend & were exhausted from the long bus ride (10 hours each way), but it was worth the trip. In fact, it was one of the best parts of the entire experience in Morocco & I am glad I let go of my urban comforts for couple of days. 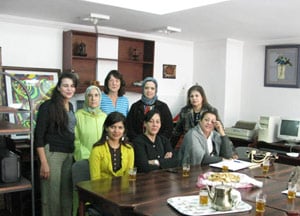 Another highlight was working with my students at La Feminin Pluriel. The ladies (& 1 gentleman) who came to the school were from all aspects of life, but had a common goal. They were economists, accountants, professors, homemakers and students, but all wanted to learn English so they can better express themselves to the outer world. They wanted to be able to communicate with their colleagues in the US, travel or watch TV programs. The students were so grateful that I had flown all the way from US, taken time out from my work schedule & was teaching them English for free! They couldn’t understand why anyone would be so selfless. The students, who were ages 18-65, named me “Usteda” meaning teacher, but also rhyming with my name “Sucheta.” They told me “thank you for you” which I believe they meant, “Thank you for teaching us.” At the end of my 2 weeks at the school, my students threw me a farewell party, with tea, cookies & gifts. I was equally touched by their humbleness in welcoming me, sharing stories of their families, their culture & their lives, & appreciating me for my voluntary work there. More on it on my blog.

Four million people in Morocco live below the poverty line, three million of them in rural areas, yet many families living just above the poverty line also face severe inequalities in income distribution, health care, and living standards. In Morocco, the average years of schooling for a child is...