Skip to main content
Tami Clayton is from the beautiful Pacific Northwest. She is a child and family mental health therapist by day and a fiction writer by night and is currently working on her first novel. Tami and her daughter volunteered with Cross-Cultural Solutions in Rabat, Morocco. She loves to travel in ways that allow her to more fully experience the culture of a city or country beyond being just a transitory tourist. You can visit her at her blog (www.tamiclayton.wordpress.com) to read more about her travels in Morocco and elsewhere. 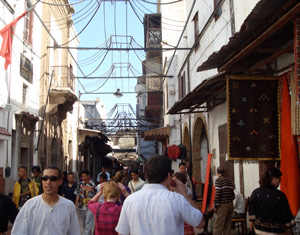 Morning: After a quick breakfast of pastries, coffee, tea, yogurt and fruit, all of us volunteers would board the CCS van to be dropped off at our volunteer placements scattered throughout the capital city of Rabat. Volunteer placements are Mondays through Fridays (Monday through Thursday for those people working in schools) and only take place in the mornings from roughly 9am - 12pm.

My then 13 year-old daughter and I volunteered (with another CCS volunteer) at the children's hospital where kids sometimes spent up to a month getting treated for asthma and related (non-contagious) lung issues. The children and their mothers would be living there in the hospital as the children's medications we adjusted and monitored. Many families traveled far to reach the hospital which was the only one in the country that had a specific asthma clinic for children.

Because the families were having to spend so much time in there, the hospital created a play space for the children with small play structures and toys in what was once an open courtyard. Our job was to entertain the kids and give them a chance to play while giving the mothers a little bit of a break. We played music (in Arabic and French), colored and drew pictures, helped kids on and off the play structure and made sure everyone was having fun and being safe while there. At the busiest times, we would have up to 20 kids in there ranging in age from 1 to 10 years old.

When our three hours were up, we cleaned up the space, said goodbye to the kids, and headed out to the front of the hospital to wait for the CCS van to pick us up. When we returned, lunch was ready and waiting. Everyone would sit together in the common room/dining room and share stories of how their mornings went. 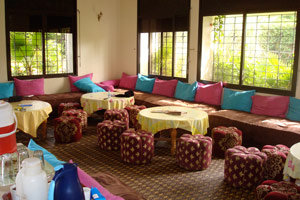 Evening: After dinner and clean up at the CCS home base, we would spend some time preparing for the next day at the hospital. This usually involved making sure we had enough freshened art supplies and a few games in our basket. This is typically what most volunteers are doing in the early evenings. When that was done, I would spend time hanging out with other volunteers at the CCS home base or going out for ice cream.

Four million people in Morocco live below the poverty line, three million of them in rural areas, yet many families living just above the poverty line also face severe inequalities in income distribution, health care, and living standards. In Morocco, the average years of schooling for a child is...