Tell us a little about yourself and your trip.

Irene: My name is Irene Oudhuis I was in South Africa from 8th of July until the 16th of august. I live in Holland but I am born in Somerset west, South Africa. Now I’m 19 but during that period I was 18 and fresh out of highschool. I traveled to SA on my own, which was kinda scary in the beginning. But ones you are there then you meet heaps of people ; other volunteers, backpackers and locals.

Why did you decide to volunteer with SASTS in South Africa?

I took part in the Volunteer program because I felt like this is my way of giving something back. Growing up in Holland has been very fortuned en has given me many opportunities. In South Africa there are lots of children who don’t have similar opportunities and who are struggling to survive. Even I if my assistance could only help one person or make someone forget their problems just for a few hours, then I would have helped them. I like to believe that I can make a difference even if it is just one person out of the millions who need help.

When I decided that this was what I wanted to do, I started to look for organizations who offer such programs. I ended up with Activity international and they had a partnership with SASTS. The people at SASTS have been very helpful and made my experience unforgettable. 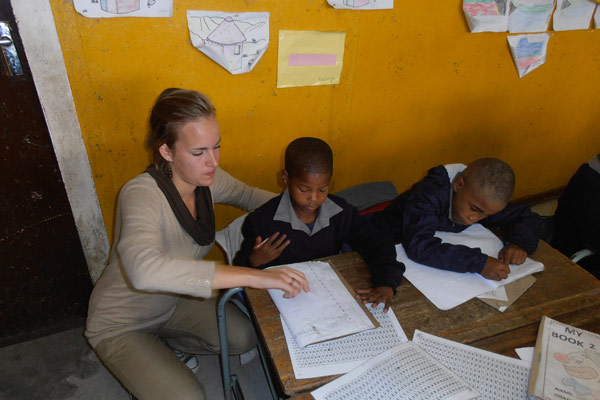 Irene: I was volunteering at Ikaya primary school in a township called Kayamandi near Stellenbosch (30 minutes with the train to Cape Town). In Kayamandi most people grow up speaking X’hosa so communicating with the younger kids is quite difficult but when you do get through to them then it’s a great feeling. I remember on my first day in second grade I was helping one of the slower students with her math. It took me half an hour to explain it to her and then when she got it she was sooo happy and tried to give me one Rand (about 0.1 euroCENT) which for me is next to nothing but for her it was all she had to buy a small piece of candy during break time. For the second grade schooldays where form 8:00 to 13.30, I was there assisting the teacher.

My day started with reading the names of the kids to see who was present. Then they would start with math, then I would first help the slower students and after that the kids would come to me with their books for me to check. After that it was about break time. After that I would help Kayise (the teacher) with typing out and copying the lesson plans. Meanwhile the kids where studying X’hosa. When the kids where done with that we usually do a learning game or sing some songs.

What advice do you have for future volunteers?

Irene: Don’t be afraid to emerge yourself in the experience! Really get to know the people and ask them lots about their lifes and South Africa. This way you really get a complete view of the country and the people. And then you really make it an unforgettable experience!

Irene: The time I spend in Kayamandi changed the way I look at the world and the way how I look at people. Some people there really struggle to make ends meet. And yet the government really doesn’t care about them. There are millions of people who live in townships like Kayamandi, some even without electricity and running water. If that would happen here then everybody would be jumping up to help but now it’s 9000 km away and nobody cares…

SASTS believes that international voluntary services help empower local communities by developing self reliance and sustainability, whilst providing guidance and support on global issues such as poverty alleviation, skills training and development. We aim to help improve the quality of life of many...