Skip to main content
Andrea Borrelli, 22, volunteered in South Africa from August 14-26, 2011. She is from Fairfax, Virginia ("close enough to D.C. to just round up").

Why did you decide to volunteer in South Africa with SASTS?

Andrea: I never used to do anything spontaneous, but last summer was the summer before I graduated. I knew I had to do something to really make the most of it. I had saved up a good amount of money from my various college jobs and decided to actually use it (which was a very hard decision to make!)

I knew I wanted to go back to Africa (I had traveled to Ethiopia the summer before), but this time I didn't want to just be a tourist. A friend of mine had told be about IVHQ earlier in the year and in June I decided I would go with their SASTS program in Cape Town for August. I basically found the program and booked it only a month and a half before I scheduled myself to leave. This was one of the best decisions I have ever made and now I am a bit more spontaneous because of it! 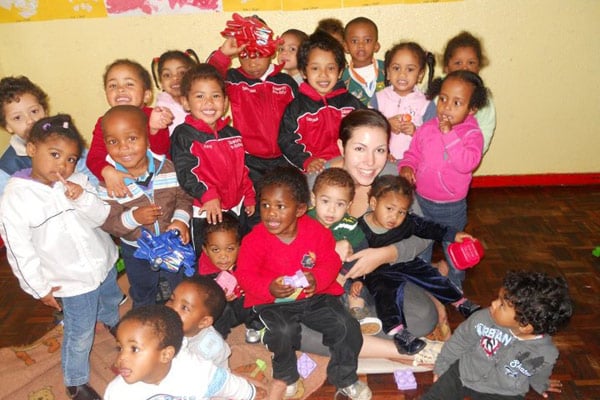 Andrea: I was only in South Africa for two weeks and I wish I had had the money to stay longer, but because I had such a short trip I made the most out of my days. Tuesday - Friday of the first week, I went to work at a pre-school right by my host family's house with my roommate, who was also working there. We would get there about 8am and leave for lunch (when the kids were napping) around 11. Then we would return at 1 and stay until 5. Most volunteers arranged shorter days, but I wanted to spend as much time as possible with my school. The teachers I worked with took me in as if I had been there for years and I actually just got a letter from them with updates on all the kids, but back on track, that was my week.

The weekends were spent at the SASTS house in Sea Point. My roommate, a couple of other volunteer friends of mine, and I would spend every moment we could site seeing or shopping or going out and enjoying the city. I only had one weekend to do this, but I know if I had stayed longer I would have continued in the same pattern. The second week I was there was pretty much the same as the first, except I did get one day off from working to go on a safari before I had to leave.

Andrea: Definitely the people. The SASTS staff at the Sea Point house made me feel like I had known them for weeks instead of days. Also, like I said before, I had the most amazing school. The teachers were so welcoming and I still think about my children there everyday - actually, my office at work is covered with their pictures. The other volunteers were also important parts to my experience volunteering. My roommate and I still stay in touch and we were able to reconnect in New York a month ago, which is incredible seeing as I am in Washington, D.C. and she was coming from Germany. I truly mean it though when I say every person I met in South Africa affected me. I still talk to a lot of them and think about all of them all the time. Even though I was only there for two weeks, I feel like I will always have a place in my heart for South Africa and my children from the pre-school.

Andrea: I am applying to the Peace Corps now, mainly because of this experience. I learned that I could handle traveling alone. Even though it was a short time, I learned how I handle a transition and myself in another country. I finally feel like I can handle the Peace Corps and maybe I'll be placed close enough to Cape Town so I can visit.

SASTS believes that international voluntary services help empower local communities by developing self reliance and sustainability, whilst providing guidance and support on global issues such as poverty alleviation, skills training and development. We aim to help improve the quality of life of many...