Skip to main content
Adrian Matthews was in Medellin, Colombia from July 9-August 23, 2011. Adrian graduated from Muskingum University in New Concord, Ohio earlier in 2011 with degrees in psychology and English. He is a rabid sports fan (although modern advances in medicine help to keep the rabies under control... mostly), and also enjoys playing the piano and photography. He currently lives in Lancaster, Pennsylvania and works at a behavioral counseling agency, providing therapeutic support to children and youth with developmental, emotional, and behavioral disorders.

Adrian: I found out about the program through my soccer coach at college, who is friends with David Lloyd. He saw one of David's posts about ILA and the program in Colombia on Facebook and passed it on to me because he knew I was looking to work or travel abroad after graduation. Initially, I actually didn't think too much of it; I had glanced over the program info but sort of dismissed it since I was looking more toward teaching English. A few weeks later, it sort of popped into my head as I was falling asleep and I realized then how perfect an opportunity it really was. I love football, so the opportunity to volunteer with FIFA was a huge draw; I also had studied Spanish in high school and for a couple semesters at university but, since I hadn't studied abroad for a semester, I hadn't really taken the opportunity to put my classroom knowledge to the test. I put in my application a couple days later, had a couple of Skype interviews with David and had a chance to talk about the program and get some questions answered which only made it clearer that this was something I really wanted to do, and the rest is history. 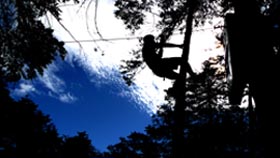 Describe your day to day activities as an intern.

Adrian: My experience for the FIFA program was sort of divided into two parts: the first three weeks were centered around the language courses at UPB, and for the second half the focus shifted more to our responsibilities with FIFA for the Under-20 World Cup. A typical day during the first half consisted of four hours of Spanish classes, starting in the late morning. This left our afternoons and evenings free to do things like travel around Medellin, lounge around at UPB's swimming pool, go out for a dinner with the other people in the program, watch Copa America matches (which was taking place over that time), or hang out for a quiet evening at one of the local billiard halls we found.

For the second half of our time there, our only responsibilities were with FIFA, so for me and the majority of the other people in the program, that meant we only had to be there for matchday which gave us the freedom to do daytrips out to Antioquia (the federal district in which Medellin is located) or ride the cable car up the mountains to a really cool nature park (Parque ARVI), or things like that. Unfortunately, I was watching my funds pretty close at the end so I never took advantage of the lull between rounds of matches to venture outside of Antioquia, but others in the group did a bit more travel, and, from the reports, loved it.

Throughout the whole 6 weeks though, there were a few things that kept popping up. One was interviews with local regional, and even national news outlets wanting to get the scoop about the group of foreigners who had come from all over the world to work alongside the Colombian volunteers to put on the Under-2o World Cup. After the 7th interview (not an exaggeration... I did 7 by my count) I sort of stopped thinking about it, but I still remember the feeling of absolute horror when a film crew from Caracol (Colombian national network) and a crew from TeleMedellin showed up at one of our Spanish classes within the first week and a half and I thought to myself What in the world have I gotten myself into?

There were also plenty of events going on around the city the whole time; we were there for Veinte Julio (Colombian Independence Day), Colombia Moda (an international clothing and fashion convention), La Feria de las Flores (the annual, three-week Festival of Flowers which had 1oo+ concerts, parades, and other events packed in all over the city)... we also went to a Pitbull concert, which, for better or for worse, was certainly unforgettable. One final consistent highlight was that Johanna Molina, one of the co-founders of ILA, is from Medellin, so she had contacted some of her friends who had a football team and organized some evening matches for us. It was like our own little World Cup: Colombia v. The World.

Adrian: For me, without doubt, the most special part of the experience was the people; I had actually talked one of my good friends from university into applying for it as well (it didn't take too much convincing), and we ended up staying in the same house with the same host family. Speaking of our host family, they were fantastic as well and helped us in any way possible... making sure we knew our way around the city, making delicious meals (oh, the food... mmmm), making us feel like their own children. But I think it was also such a unique experience because I think we all (the 10 of us interns) had the sense that we weren't just coming down for the program with some company, exploring the city, then returning home with a bunch of stories (which, with varying degrees of fluency, we happened to be able to tell in Spanish).

I think we all quickly realized--at the reception dinner a day or two after we arrived, if not before--that we WERE Intern Latin America... that without our decisions to commit to the program, David and Johanna and Pablo (the other co-founder of ILA) would have just been three smart, honest, hard-working entrepreneurs with a great idea and nothing to show for it. By being there, we were giving substance to the vision and ambition of it's founders who had had an idea for a startup and decided to work their tails off trying to make that vision a reality. Now, every time I see David or Johanna post something to Facebook about their most recent partnership with some Latin American government, a business competition they've entered and won, or a new door they've opened for the new waves of interns working with (which seems to happen like clockwork), I feel a sense of excitement that I contributed in some small way to sustaining that vision.

Adrian: The most lasting effect of my time in Colombia will probably prove to be the massive improvement in my Spanish. The six weeks of immersion and classes honestly did as much for my Spanish as three years of high school Spanish and two semesters of intermediate Spanish at university combined. Since returning from Colombia, I've been working in Lancaster, Pennsylvania, using my psychology degree at a behavioral counseling agency that serves children and youth.

One of the first clients I worked with was a three-year-old boy from a Puerto Rican family; although his mother communicated fairly well in English, she spoke exclusively Spanish with him, so he was having significant difficulties as he was beginning to enter daycare and was needing to try to communicate with peers who only spoke English. I was also able to communicate with his grandmother in Spanish to transfer skills for helping him behave appropriately to her.

This early experience has given me the desire--and confidence--to continue finding opportunities to improve my Spanish to get it closer and closer to fluency, helping me to better serve the growing Spanish-speaking population in the US as I continue to work in the mental health profession.

We offer successful applicants the chance to gain invaluable work experience in one of the world's most exciting and fastest-growing economies, Colombia. During your internship abroad, you will gain hands-on professional experience and build a network for your future career. Your internship in Latin...