Skip to main content
Abby Beham attended the University of Newcastle in Australia from July 2011 through November 2011. She is from Sylvania, OH and attends Miami University, studying architecture. She enjoys spending time with her family, traveling, and listening to country music. 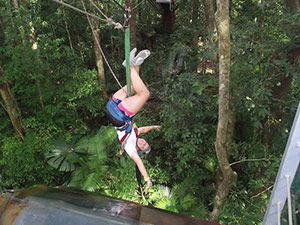 Why did you decide to study abroad with GlobaLinks?

Abby: Studying abroad through Globalinks was a great decision. Not only is the staff extremely helpful in the pre-departure process, but you get a lot of ‘bang for your buck’.

Abby: For the first week, there is an orientation to Australia in Cairns, the touristy part of Australia. Here, you participate in all things “Australia”. We held koalas and fed kangaroos, we snorkeled the Great Barrier Reef, and we participated in a community service day. We had traditional Aussie barbeques and got a free day to participate in additional activities for a reduced price. Not only was there so much to do in Cairns, but we also met Americans who were travelling to other universities throughout Australia, so we had people to stay with when we travelled. I met a good friend who was studying in Brisbane, so I visited her during the school year and got to experience another city in Australia.

Abby: This study abroad experience has helped me to grow so much as a person. Not only was I challenged academically, but I was also challenged to become more mature because I was on my own on the opposite side of the world. I learned so much from the people I lived with, attended classes with, and became friends with from other countries. Each person I met had their own story and amazing things to share with me. I would never trade anything for the experience I had being abroad and would recommend it to everyone. 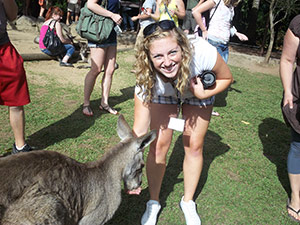 Highlights: The academic highlight of my trip was finishing up a project in my furniture course, where I designed and built a combined seating and shelving unit. It was so fulfilling to complete a real life project from start to finish at full scale. I was challenged by using new equipment and a new way of thinking in a new place with new classmates. The challenge ended in a successful project. The highlight of my trip outside of the classroom was during my spring break trip to New Zealand. I bungee jumped 440 ft! It was something I never thought I would have the guts to do but since I was trying new things and visiting new places, it was only fitting that I would accomplish overcoming a new fear. The feeling was unlike any I had felt before. It was so freeing and rewarding and I can’t imagine anything else I will do in the future that can compare (unless maybe I sky dive next!). Another amazing highlight of my trip was scuba diving in the Great Barrier Reef. It was hands-down the most beautiful thing I have ever seen. The colors and textures of the reef were breathtaking and seeing large sea turtles and stingrays so close and personal was so cool. I only wish that a camera would give the reef justice.

Typical Weekday: A typical school day in Newcastle, AUS started with me waking up, running to catch the train, and then making the commute to uni. I attended class with other Australians and a few people from other countries, like Sweden and Germany. I would go to the library in between classes and then either take the train back to my house or catch a ride with my Australian friend who was in several of my classes. At night, I would generally do some homework and then watch a movie with my 12 other housemates from around the world. These days were not so exciting but I learned a lot in my classes.

Typical Weekend: During a typical non-school day in Newcastle, AUS, I would wake up and hang around the house until someone else was ready to go to the beach. We would lather up with sunscreen (the sun is so much more intense over there) and then stop by and pick up some of our neighbors on the walk over. We’d then spend the day at the beach laying out, building sandcastles (even though we are much too old to do this!), play a pickup game of footy or volleyball, and then attempt to surf (it was always obvious we weren’t real Aussies because we could go into the water in winter without a wetsuit on!) After this, I would typically go for a run along the path by the beach and people watch. At night, I would have dinner with my housemates and spend time with them, either staying in or going out to the local bars.