Skip to main content
Talia is currently a high school junior at La Canada High School in Southern California. She would like to pursue health policy of healthcare management, with a possible focus on Latin American healthcare.

Why did you decide to study abroad with Sol HS Abroad? 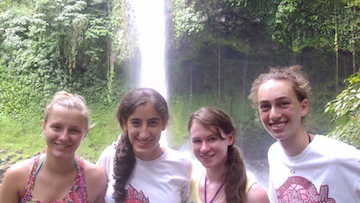 Talia: In short, the itinerary looked great and the price was very reasonable. I had finished my third year in Spanish and was looking for something to prepare me for AP Spanish. Costa Rica has a reputation for having a very pure form of Spanish, which was actually really helpful in retrospect. My family and I also knew that Costa Rica is a very safe country and ideal for vacationing. While there were several programs to chose from, in the end, Sol Abroad offered an experience that offered the entire experience. I went to class, I stayed with a host family that only spoke Spanish, I made like-minded friends, and got to experience life as a Costa Rican!

Talia: Everything was truly special. That sounds very generic and trite, but it's true. I made several new friends from around the U.S. who were my age, I saw one of the most beautiful environments in the world, greatly improved my Spanish speaking skills just within the three weeks I was there, and I gained a new perspective on the real life of a Costa Rican family. The excursions were a fantastic component to the trip because it allowed us to see not just one city, but several different aspects of the country. It's hard to put into words the way I felt after the trip. I guess the best word would be depressed because I really wished I could have stayed there for a longer period of time. Three weeks was not enough!

Talia: In all honesty, I have no regrets. My trip was fantastic and nothing went wrong. Maybe I would have gone for a longer period of time to try to get as close to "fluency" as possible. I probably should have taken less sweatshirts and pants and more clothing for the hot, humid climate. 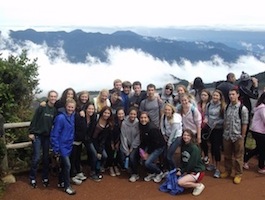 Talia: I knew I loved the Spanish language before going on this trip (that's one of the reasons I did go), but it helped make that passion even greater. I hope to integrate my Spanish skills and global perspective in any occupation I have as an adult. I would like to go into healthcare and since I currently live in Southern California, the Spanish speaking population is a huge factor in the industry. Having that knowledge gives me an extra edge that other potential job seekers might not have. I am also planning on either double majoring or minoring in Spanish or Latin American studies once I get to college. I know my trip to Costa Rica has had a huge impact on who I want to be and what I want to do as an adult.

Come study abroad in the Happiest Country on the planet...¡Costa Rica! With the Sol Abroad program you will experience all the natural and cultural wonders of this unique Central American country. The program includes Spanish classes in the mornings, cultural and volunteer activities in the...