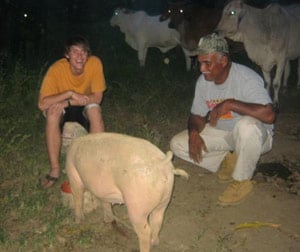 Morning: Every morning I would wake up, and my host mom would be just leaving for work, and my host dad would be out working in the fields before it got too hot out. We would have some coffee, and usually a typical Panamanian breakfast that was simple to make, such as hojaldres or even some pan. After breakfast I would always shower, then I would help out my host sister with chores. Most of the kids in the community had school in the morning, so I had that time of day to myself, and I could do almost anything with it. When I was able to, this time proved invaluable in completing the CBI process, and it was great to plan for campamentos.

Afternoon: Usually the afternoon would begin with lunch. Usually, I ate at home with my host sister, but on some days I would get invited to eat with other people throughout the community. Lunch was always rice, and some sort of meat or even the occasional soup. The kids of the community were still usually in school, but they all got out at around 2 or 3 o'clock.

In this spare time, I liked to partake in my favorite snacks around the house, which involved going to one of the several fruit trees and having some mamones, starfruit, coconut, or even guanabana. After the kids got out of school, they would ofter come over to my host family's house just to hang out, at least until campamentos started.

Evening: Campamentos started late in the afternoon, and lasted for about two hours. My partner and I met with the kids at a central location, and played games and talked for the full time. Our goal was to teach them about environmental health, and we did the best we could. This was the funnest part of the day.

Campamentos would end and my partner and I would head home. After I got home, I would take a nice cold shower which was a nice break from the heat and humidity. My host family always said to shower at least twice a day, and I always happily obliged. Usually I would lay down in the hammock and watch some TV until my host mom and dad got home. After they got home we ate dinner, then we all went and watched TV as a family. Shortly after, it was time to go to bed.

Highlights: Campamentos were most definitely the highlight of my trip. See the kids everyday was such a great way to brighten the day. They were always so happy and so eager to help and have fun. Speaking a foreign language was always the easiest around the kids because they're more than happy to teach you, and they don't care if you're constantly making mistakes. It was just one of those times were everything always went my way, and I always had fun doing it.

Promote health, reforestation, and environmental protection by learning from local agencies taking care of the environment by creating nurseries, planting trees, and protecting local water sources. Explore the tropical scenery and the diverse geography of the Coclé region in Panama. You’ll live in...