Skip to main content
Maggie To is from Marlboro, New Jersey and is entering her senior year at the University of Pittsburgh in Pittsburgh, Pennsylvania. She is a double major in the Biological Sciences and History and Philosophy of Science and hopes to practice medicine internationally in the future. 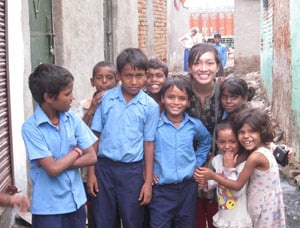 Morning: I was typically woken up at around 7:30 am each morning for breakfast, which usually consisted of Chapati (think unleavened bread) with a side dish, maybe jam, oatmeal, or bananas. I often also had Chai, a popular Indian tea mixed with spices, milk and sugar. Depending on where I was volunteering that morning, I either walked or took an IVHQ auto-rickshaw to my destination.

While on the health placement, I volunteered at various hospitals and local clinics observing surgeries, taking vitals, or simply shadowing doctors. For the last four weeks of my six week trip, I taught English at a slum school located in the heart of one of the slums close to my host home. I taught English grammar and conversational skills to a school filled with 100-200 children who lived inside the slum.

Afternoon: In the afternoons, I typically roamed around with the other volunteers. Some days we took the Delhi metro into New Delhi and shopped or went to visit the local sites. Most days, however, we visited the local orphanage that was set up by my own host father which housed 9 children. We often brought the kids to play at the local park and sometimes treated them to ice cream from a nearby store. We also took daily trips to the “market street” close to our home, which was filled with boutiques, bakery shops, and small grocery stores. Malls and cinemas were only an auto-rickshaw trip away – we ended up watching quite a few films here, including the newest installation of the Batman series, the Dark Knight Rises!

Evening: The evenings were usually quiet, unless I was coming home from New Delhi, in which case I was flanked by screeching horns and bright headlights on the journey home in an auto-rickshaw. After eating dinner around 6:30 pm, the other volunteers and I would recline in our bedroom, secluded from the mosquitoes, lizards, monkeys, and other animals that roamed about. I usually showered in the evening, washing off a day’s accumulation of dirt and sweat from traveling about along unpaved roads and pollution filled air. Other than for our trips out to Delhi, the other volunteers and I usually stayed in after dark, particularly after 9:00 pm, for safety reasons. 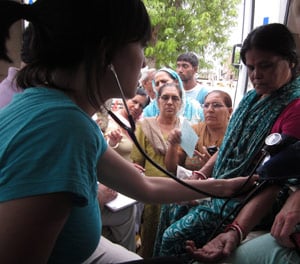 Highlights: The highlight of my volunteering experience was interacting with the children at the slum school. Along with teaching English, the other volunteers and I would lead the kids in song. Jingle bells was a particular favorite – they would sing it so loud the principal would have to intervene because we were disrupting the older classes. At first too shy to join in, the kids stared beady-eyed up at us as we did the motion of the itsy bitsy spider and the hokey pokey. By the end of my trip, they were singing enthusiastically along with the rest of us and even asking specifically for it. “Didi! Didi!(Hindi for sister) they would shout, and then poke their little index fingers to the ceiling, asking if we could do the hokey pokey again.

The highlight of my overall experience was having the freedom to travel and experience the sites of India. IVHQ gives its volunteers the weekends off, so the other volunteers and I took advantage of this liberty to visit Dharmasala, Varansi, Agra, and Delhi. Getting to Delhi was relatively easy via the Delhi metro, but it was less easy to travel to Dharmasala and Varanasi. Luckily, our host father gave us pointers about where to go to book bus and train tickets. I got to visit beautiful sites like the Taj Mahal and witness religious cremations at the ghats along the Ganges River. Participating with IVHQ afforded me the unique experience of being a tourist whilst also being a volunteer.

Trusted by 120,000+ volunteers, IVHQ offers the world's most popular volunteer programs in India and 50+ destinations around the world. You can choose from 12 volunteer project options: Childcare, Health, Slum Teaching or Teaching and give back for periods ranging from 1 week to 24 weeks. Your...

Head of Sustainability and Risk