Skip to main content
Heiko van Eijnsbergen. He volunteered from August 18, 2013 to September 8, 2013. He was born in Germany but raised largely in Vancouver Canada where he attended schooling from grade 6 to getting his law degree at the University of British Columbia. He is now 73 years old and is retired from practice. He continues to engage with the world and focuses his questions on who we are, why we are here, and where we are going.

Why did you decide to volunteer abroad with African Impact in South Africa? 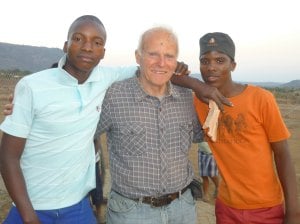 Heiko: I decided to volunteer with African Impact because among the wide variety of options they included exactly the combination of volunteer opportunities I and my family were looking for: primarily rhinos and elephants along with conservation and community work.

We had a previous experience in Namibia with another organization which involved primarily carnivores. Many of these were in enclosures, but some had to be tracked by radio in very large areas. As we had enjoyed this experience we wanted to come back; but with a focus more of on the larger animals.

Heiko: My favorite moment of the trip was our first encounter with elephants after six days of searching for them. Excitement was building up as efforts to locate them intensified. Then other thoughts crept in as the days wore on, and despite rumors of sightings by others. Monty Python’s skit of the cheese shop came to mind. The operator happened to be out of the cheese the customer first requested, and then the second one, and so on for several dozen more, each with different excuses, until the operator finally admitted that he had no cheese. Perhaps the elephants had wandered away or had been killed by poachers. 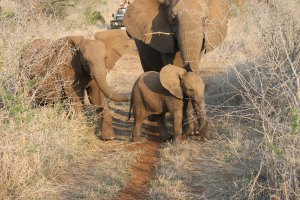 Finally our driver, Cela, the one with the 80-80 vision, spotted what he thought was a movement over half a kilometer away. Less than ten minutes later we were surrounded by a herd of about 20 of these phantom-like creatures. Like a flotilla they quietly moved across the track on which our vehicle was now stopped. They emerged here and there one or a few at a time out of the bush at one side; and disappeared as in a fog into the growth on the other.

As I now remember the event, I have to recall that feeling. It is one of life and peace in rich abundance. One large animal had turned to slowly approach our vehicle. We sat still. He came to within less than 20 feet; and Cela had his hand on the starter. Then the Elephant just looked, as if standing guard, as other Elephants, old, young and very young continued to cross the track. 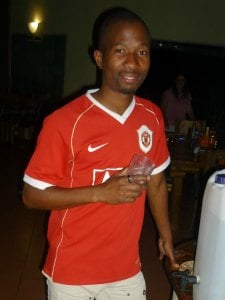 Heiko: Others had gone on excursions for the weekend; and some of the kitchen staff were on a break. I introduced myself to a quiet and diminutive young man named Phiwe. It turns out that he is a soccer player and moreover captain of his team of players made up of residents of surrounding communities. He explained in some detail the struggles and frustrations involved in advancing his team so that some of the players might have a chance to become professional.

This was not just kitchen help; but a young man with intentions of studying and advancing in the hospitality industry, and showing his initiative, vision and ability in organizing and steering his soccer team. Soon we were talking philosophy. I discovered in Phiwe a serious, wise and spiritual man. He looks at the local church in its varied forms with a sense of longing for something more profound and more inclusive. Phiwe is only one of the staff that I have come to appreciate, respect and admire for their dedication, skill and character.

The employees reflect well on those who hire them. There is a sense of integrity or genuineness that pervades the entire project. Those people who are more permanent, and in that sense are ‘running’ the projects, show their dedication not only in their attitude toward volunteers and visitors but also in their love for the animals, particularly the endangered ones. Not least indicative is their sincere and diligent outreach to the surrounding communities. 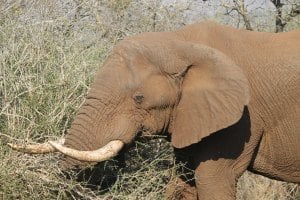 Heiko: Animals too are individuals. It is a serious challenge to identify those individuals and to become familiar with them such that they become more easily recognizable. I would hope to make more of an effort to enable me to get to know the individual animals better. That would open the way to start studying the relationships between members of a group. This is what the resident scientists do; and I would try to draw more on the help that they readily provide by way of off field identification from photographs and descriptions.

I would also try to become more focused in establishing relationships with individual members of the communities with which African Impact is involved. Each time I have talked to someone more at length I have learned something and obtained a greater appreciation of the individual. I realize that these ambitions are too time demanding for a two or three week stint. So I would have to choose either a greater animal focus, or a greater people focus, or a greater amount of great time.

Do you feel this project allowed you to contribute in a meaningful way?

Heiko: Even in my untrained capacity I felt gratified by my ability to contribute. There was not much of the day that was wasted; and schedules were adhered to with a no nonsense discipline. Collecting, recording, and entering animal data is painstaking. Though I spent much time learning to do this, it was largely learning on the job where I was part of doing necessary tasks. The community work was at times overwhelming because of the number of children looking for attention; so every minute contributed.

One can’t learn English in one session; so again, every minute was meaningful if only for the few things that might be learned in a short time. The conservation work in terms of clearing and uprooting invasive species is daunting; but can also only be done one root at a time. So I have to say that in every way I was able to contribute meaningfully, not because of any special skill but due to how my participation was organized.

There is a reason why South Africa is consistently rated one of the top travel destinations in the world. Make that several reasons. Where else can you watch the sunrise from the top of a mountain, catch a wave in the ocean, and spot an elephant roaming at dusk all in the same day? President Nelson...