Skip to main content
Katie Bakkum is originally from Iowa and is currently a junior majoring in Biology and Spanish, with a minor in Chemistry. Upon graduation, she hopes to attend medical school to be an ER physician. Currently, she works as a CNA and hospice aide for a local hospital. She loves experiencing new cultures, and is eagerly awaiting the start of her next adventure. 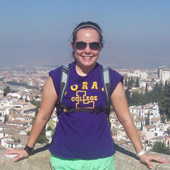 Highlights: On the weekends we headed to the beach or the mountains, and both are just a short bus ride away! Traveling is a must! We started the semester with an excursion to Morocco, and Barcelona, Paris, London were all just a short flight away! Granada may be smaller than some of the country’s other cities, but what it lacks in size it makes up in diversity and fun. Each day brought new experiences; ones that I will carry with me the rest of my life.

Morning: Everyday life in Granada was laid back, but never boring. Each morning, on my walk to the city center, the Alhambra kept watch from overhead. We visited the world famous landmark during the first week of orientation. It was on its tallest tower, gazing at the city stretched out below, that I first fell in love with the city that became my second home. 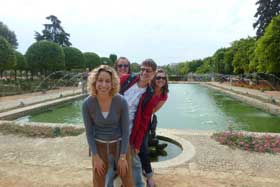 Afternoon: During the school week, I spent anywhere from four to six hours at the Center of Modern Languages, where I took classes. On breaks I chatted with friends in the courtyard or grabbed a coffee from a nearby café. I ate lunch at home with my host family every afternoon and then, after grabbing a quick nap, headed back to school.

Evening: Evening classes were taken at the Central Abroad office with the program instructor, Jose. He gave us extensive grammar and phonetic lessons, but kept us laughing at the same time. Once our school day was over we spent the hours before dinner shopping, relaxing at a tea shop, or going for churros and chocolate. After sunset, Granada truly comes alive. The streets were always bustling with people of all ages. It’s famous for its free tapas, and we spent many a nigh scouring the streets for the biggest and the best tapas of them all. Soccer games, concerts, movies, theater, dance clubs –Granada has it all.

Granada is a city at the intersection of two beautiful cultures. It is a jewel of Arab civilization on the Iberian Peninsula, as well as a modern city of 250,000 at the foot of the Sierra Nevada Mountains. In the streets, you’ll see both mosques and 16th century cathedrals. At the dinner table with...