Skip to main content
Andy Ezeta is a 27 year old biologist that lives in Mexico City. Among her passions we can mention diving, photography and playing the ukulele (although she is not very good at it). Right now she is planning to go to New Zeland to study a master in Science Communication.

What inspired you to volunteer abroad with GVI in Mexico? 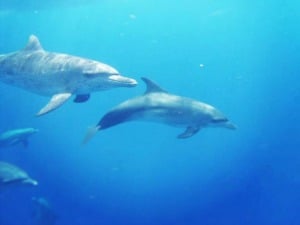 Andy: Have you ever had that feeling of being stuck in a routine? That one that makes you’re days go slowly and you’re just there, sitting in an office desk or a hot classroom waiting for something to happen? Well, I was suffering from that.

I was trapped in a boring office all day long feeling stressed and angry all the time. That’s when a good old friend of mine came to my rescue, he told me about this project called “GVI.”

The way he described it sounded so amazing that I couldn’t resist, and so, without hesitation, I enrolled in the Pez Maya – Marine Conservation project.

Andy: For me the 3 months I spend there were memorable. But I have to say, the best day was when we got to swim with dolphins! This was actually on my last day at the base (my scholarship was over). And I was a little annoyed that in the three months I lived there I hadn’t seen dolphins on any of my dives.

So that morning I was telling everyone that this was THE day, that this would be the best dive of all. So, we were reaching our destination when suddenly the other boat radio us saying that they found dolphins!

Our captain quickly changed direction and took us where the other boat was. And to my surprise, there was a family of 12 dolphins jumping and playing between the boats.

We did not think it twice and we dove into the water. We swam with them for hours. My dream came true that last day. It was one of the best days of my life.

Andy: Well I volunteered in my own country, so I didn’t experience any cultural differences. I was used to everything. But actually it was fun to witness how other volunteers reacted to my culture, especially to the traditional food.

Mexicans have a pretty big variety of dishes. We like our tortas, tacos and quesadillas. But the volunteers had big problems identifying the differences between each dish (and trust me, there is a big difference). 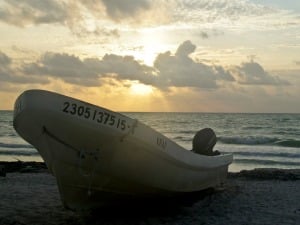 Andy: Not at all, actually it was fun to learn other languages. What we used to do was to teach others words and phrases in our native languages. So we learned how to say “Where is the bathroom?” in Spanish, German, Swedish and French.

Andy: Uff, I can tell you about everyone at base. Each of us had a different personality that made this experience incredible. For example, in my first month I met Sandra (from Switzerland). We arrived together and we were a little afraid of what we were going to encounter in that new and strange place.

We became good friends while we were trying to adapt to Pez Maya’s life. In that first month Tom and Josie (both from England) helped us a lot, explaining to us what to do and where to go.

In the second month I met Luca (from Belgium) and Will (from the USA). They were placed in my hut so we became team Amanecer. It was fun to show them how to survive in Pez Maya. They were excellent roommates.

In my third month I made a good friendship with Sam (from England) and Dylan (From Australia). Those two made me laugh every day. They were crazy.

Participate in marine conservation or community development projects in Puerto Morelos, a port city in Mexico. The city is nearby Mayan ruins, mangrove swamps and the Mesoamerican Barrier Reef System – the second-largest reef in the world. You could contribute to the preservation of coral reefs...