Skip to main content
Rachel is from Minnesota and currently attends the University of Wisconsin Madison where she studies Wildlife Ecology. She loves photography and exploring the outdoors.

Rachel: There were many factors that led me to choose to volunteer through UBELONG, primarily my past experience with the organization. I volunteered through UBELONG in Cusco, Peru and I had a great experience. I felt prepared when I left because of all the information the UBELONG staff provided. I also enjoyed staying in a volunteer house in Cusco and meeting other volunteers from around the world.

My trip to the Galapagos was another incredible experience. Like before, I was assigned a UBELONG mentor who was extremely helpful in answering my questions. She also provided a lot of information about the location and project. The project leader in the Galapagos was also very helpful. He picked our group up at the airport, taught us about the project and the environment, and showed us around the island. 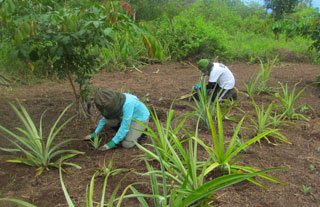 I also value UBELONG’s commitment to engaging the local communities and their emphasis on the volunteering aspect, rather than the tourism aspect of the trip. Therefore, I knew that volunteering through UBELONG would maximize my impact and my experience.

What was the one moment of the trip you will never forget?

Rachel: One of the most memorable moments was seeing how much of an impact volunteers have had, and will have, on the reserve. The leader at the reserve where we worked showed us a large area of land that was completely covered by trees and other native plants.

He then explained that the entire area used to be covered by the invasive blackberry bushes that we were removing in other areas of the reserve. Although the work can seem tedious, this showed me the importance of what we were doing and how each volunteer plays a role in achieving large-scale change.

Rachel: The Galapagos Islands had a very interesting cultural dynamic, due to the large presence of the tourism industry. The majority of the people seemed to be tourists and towns were primarily comprised of tour agencies, souvenir shops, and restaurants. Although I had known that tourism was the prominent industry in the Galapagos, I had not expected it to be so evident.

The fact that many of the local peoples’ livelihoods revolve around tourism also gave me a different perspective on the work we were doing at the nature reserve. This trip had initially appealed to me because of my love for nature and belief that the environment should be protected for its innate value. 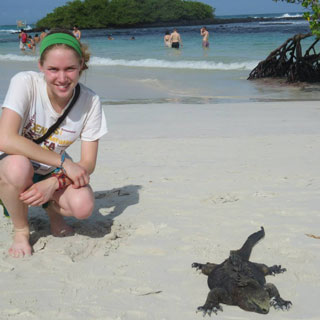 However, seeing how reliant the people of the Galapagos are on tourism, I understood that the preservation of the island was vital for the economic stability of the islands and their inhabitants.

Talking to some of the locals about the work we were doing gave me a more personal understanding of the impact tourism has on the locals and the importance of preserving the unique environment.

Rachel: I do not speak Spanish, however the language barrier was not a significant issue during my trip. The project leader at the reserve where I volunteered spoke English but many of the natives who lived in the towns did not.

Overtime, it became easier to communicate with the locals using gestures and a combination of English and Spanish words I learned. I specifically wanted to volunteer in a country where I did not speak the language because it’s a great and valuable experience to learn how to communicate with others who speak a different language.

Rachel: Something that I wish I had done before my trip was learn more about Ecuador in general. I think that having a better understanding of the history, politics, and culture would have enhanced my trip by adding more background and context.

Since I would be working on an environmental project, I had researched the Galapagos ecosystem before leaving. However, learning more about the other aspects of the country would have provided me with a broader understanding of and appreciation for Ecuador.

As with any experience abroad, it is hard to know what to expect before you arrive. Therefore, I made sure to keep an open mind prior to and during my trip. Realizing that things may not go as planned or I how I had imagined, allowed me make the most out of my trip. I accepted unexpected events as a part of the experience.

This is definitely something I would do again. The conditions we were working in and the physical work was much different from anything I had experienced before, but I thoroughly enjoyed the project. Therefore, I believe that being open to new experiences is the best way learn and grow from a trip abroad.