Skip to main content
My name is Allie Williams and I’m from San Francisco, California. I was pretty

run and play soccer). I’m headed to the University of Virginia in the Fall of 2015,

with no idea what I want to study, especially after having learned about so many

additional areas of study while on my gap year. 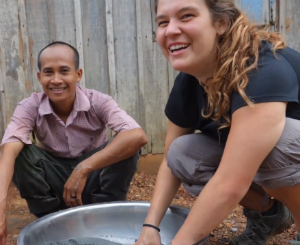 Allie: I chose to take the Asia Gap Semester with Adventures Cross Country because it is simply the best company in its field. ARCC, selects excellent leaders who not only lead the group with confidence and skill, but also are the kind of people who get to know each and every student on a personal level and care deeply about the happiness of the whole group.

Additionally, ARCC incorporates an academic aspect into the three-month program. We had a course reader that highlighted some of the current events and issues of the places we traveled through. Each activity and service project was linked to one of the core themes of the trip (also emphasized in the course reader): Microfinance and Economic Activity, Environment and Conservation, Public Health, and Education and Literacy. The end goal of the academic portion of the trip was a Capstone Project, which aimed to incorporate all that one learned into a cohesive and educational presentation (in any form or medium).

Although one might be deterred after hearing this, in no way was the academic part of the program overbearing in any way, it just allowed us to be more prepared and knowledgeable about the issues around us. Overall, ARCC seamlessly incorporates the service projects with so many other adventures, and it has maintained the relationships with local guides and contacts over the years so that now when a group returns, it is like a reunion of old friends. 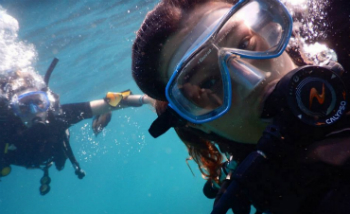 Allie: Considering that one of the main focuses of a college education is to prepare students for the large world that awaits them, what better way to begin that education than to venture out into the world itself? In three months, my group and I immersed ourselves in radically different cultures, interacted with people who have different world views, customs, and traditions, and felt the liberation from self-exploration and discovery.

I tell all prospective gap students that, if given the opportunity to take a year off from school (the conventional classroom type of school) to travel the world and go beyond anything else one has experienced in his or her lifetime, to deny oneself this chance would be to limit one’s scope of knowledge and adventure. In one year, I traveled to fourteen countries! Unlike being at school, a gap year allows one to do this! Not only will one be more prepared from having lived a full year away from home, but one will gain so much more in terms of personal and physical awareness of the rest of the world.

And just because I focused on traveling doesn’t mean that that is what all gap years entail. The most meaningful part is being able to challenge oneself, at home or abroad, and discover and learn from new people, places, and ideas in this sacred time. I do not believe that a gap year is an alternative to college, but more of a supplement and benefit that will significantly increase one’s independence and preparedness for the years to come.

Allie: My two leaders and the eleven other students were the best, most kind, caring, intellectually curious, outgoing, informed, and fun group of people that I could have traveled with. When one is with a group of people who they love and have the greatest admiration for, when one travels the world and sees sights that spur the mind and create a stronger passion for the world around him or her, they develop as a person and create a better environment for themselves and for those around them.

Although three months is a short time, so much happens in the most positive of ways. Adventures Cross Country is the prime choice for a Gap Year because they indulge all of the senses, promote greater awareness of the self and of one’s surroundings, and they cater to every person as an individual learner while encouraging them to think of things greater than themselves.

Allie: Two months into the trip, we had a student-planned weekend for which our group of 14 students got to plan and organize a three day adventure. We chose to visit Chambok Village, a rural ecotourism site (possibly the most rural place we traveled). Ecotourism focuses on retaining all of the profits within the site (or village, in this case).

For Chambok, this means that all of the money we paid went directly to the villagers and families whose houses we stayed at, whose food we ate, or whose crafts and trades we learned, while none was outsourced by a large tourism company. We handled transportation, booking, organizing activities, accommodations, and the budget. We definitely learned a lot about logistics and planning, but we also learned so much about how different countries and regions operate in different ways, and how obstacles can pop up in unexpected places. But overall, it was so great to have the independence and responsibility to take charge for a few days and guide ourselves through Southeast Asia. 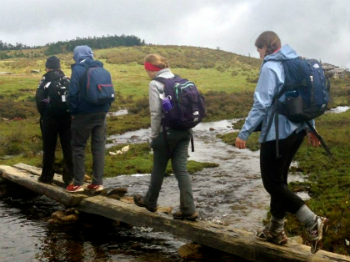 On our final night in Chambok, we ate a home-cooked meal made by a group of local women. When the generator that provided the electricity for a small stereo blew out, we stuck to the low-key, “go with the flow” attitude of our great guide, Nut Cham, and hopped in an open-air truck in search of the faint sound of music we heard down the road. Packed in the back, we began to hear some sort of thumping that got increasingly louder as the truck drove on. When Nut Cham finally stopped the truck, we had arrived at one of the village houses where nearly a hundred people were gathered around ceiling-high speakers that were blaring music. Our group, without knowing it, had just become impromptu guests at a local engagement party!

It was quite striking to see the speakers and hear the techno music in such a rural area with thatched houses and one or two cars. We went along with it, and so did the whole village, even the police officer, who danced right along with us. The full moon filled the Cambodian sky as we danced with strangers, without words, but with a pulsating sensation of joy and contentment, throbbing through us with the beat. That night was one of a kind. And did I mention, it was Halloween night?

Allie: I cannot explain how grateful I am for being placed in the ARCC Asia Gap 2014 group. We had superb leaders and students, which made each day so memorable (I can remember what we did almost every day, in order!). Just speaking praise of the people does not do them any justice, but I truly appreciated the openness that each member brought to the trip. Because of this, I got to know every single member so well, and I felt liberated in the sense that there was no need for a façade nor did anyone feel pressured in any way.

Due to the close bonds within the group, fostered by ARCC’s carefully planned curriculum and leadership training, I was able to enter each new town, village, city, and country with 100% concentration on the task at hand. Having completed the trip, I am so much more knowledgeable about many topics, from human trafficking to blue-collar labor migration and urbanization in China. This three-month adventure, carefully crafted and meticulously planned by ARCC, has empowered me to make a stand for those who cannot speak up for themselves.

I am humbled after seeing the many rural, dismal living conditions of so many people throughout the four countries; upon returning home, everyday actions like eating fruit or drinking water out of the faucet are no longer unnoticeable, unconscious actions. I am now aware of how fortunate I am to have what I have, while others have so little. Often, it is daunting to look at the world and learn about the huge, seemingly insurmountable problems that face over half of the world’s population. However, the most meaningful thing I take away from my trip with ARCC is that even though I am a single individual operating as one of seven billion, my actions can indeed make a difference, and that a single action is just the beginning.

Leave the traditional classroom far behind, as we journey to the heart of Vietnam, Cambodia, and Thailand. Our Southeast Asia Gap Semester is a unique blend of education, projects, and exploration of these intriguing and ancient cultures. Our exclusive access to people and places, developed over...