American Jewish World Service (AJWS) was established in Boston on May 1, 1985 when Larry Phillips and Larry Simon, together with a group of rabbis, Jewish communal leaders, activists, businesspeople, scholars and others came together to create the first American Jewish organization dedicated to alleviating poverty, hunger and disease among people across the globe.

Since that time, AJWS has remained true to our founders' vision and commitment to tzedakah: empowering people throughout the world to achieve justice and self-sufficiency through the promotion of human rights, education, economic development, healthcare and sustainable agriculture.

AJWS expanded my understanding of international development, women's rights and food justice, among other things. The group leaders are well trained, knowledgeable and easy going. Our host community was welcoming and welcomed us into their homes like their own children.

Prior to my 3-month volunteer experience in Phnom Penh, friends at home asked me why I would even go to Cambodia, not exactly a tourist must-see destination. After my return home, I told them about my work, my deep respect for the Khmer people, and my new attachment to a country that hadn't been on my radar before. My experience as an educator allowed me to write curriculum for training youth 18 to 30 years of age, and how to organize themselves to create and actualize volunteer projects in their own communities in eight provinces. In addition, I wrote grants for my organization, Cambodian Volunteers for Society, and even felt the immense satisfaction of receiving funding while I was still there. I know that my work was valuable to CVS, but I never anticipated the personal rewards I would receive as I was embraced by my new Khmer friends, devoted to improving conditions in their beloved Cambodia. AJWS provided me the necessary support to find housing and an in-country representative was available to help solve potential problems. AJWS has an uncanny ability to match professional skills of potential volunteers with the needs of local grass-roots NGOs. My experiences as a volunteer were some of the most fulfilling in my life.

Volunteer Summer was definitely a program that I would recommend to a friend. The way that I chose the program was because I wanted to work with women's empowerment in India, and that was definitely part of what the group did. The group was also extremely diverse. It ranged from individuals who were very observant of their Judaism, as well as individuals who were very aware of social justice issues. Therefore, if an individual is well-versed in social justice issues or is very observant, go with the expectation that you will be the teacher, and not really the student. However, I met great people, and people that I had met that summer I will definitely be friends with for the rest of my life. Also, volunteers did not have a lot of freedom on the trip. We had to constantly had to travel in groups of three, and we were not allowed to go into town without group leaders. Also, we had NO freedom to travel by ourselves on the weekends. We had to stay at the compound, so if you're expecting to travel, this is not really the trip for you. However, we did go on a couple weekend trips that were pretty fun. The living accommodations were also pretty comfortable, which is somewhat ironic, considering that we were living in a somewhat rural community. We also stayed at extremely lavish hotels which was also ironic considering the circumstances that we were surrounded by. However, the food was delicious, and I had a lot of fun. It was also an awesome way to see India, but I would definitely want to go back by myself at a later date.

AJWS Vounteer Corps links Jewish professionals with grass-roots NGOs in the developing world who can help the NGOs in capacity building. I spent 3 months in Kampala Uganda, working with a small women's advocacy group advocating for improved human rights and access to healthcare. As a lawyer with a human resources background, I essentially built a human resources system for the NGO. I also helped them with grant-writing and reporting.

I worked with a core group of approximately a dozen Ugandans - dynamic, inspiring, desperately poor and barely educated women who at great personal risk had started this tiny organization determined to fight for their rights. On a day-to-day basis, I drafted policies and documents of all sorts, but also attended countless workshops around Uganda with members of the NGO as well as local police, health care providers and many other human rights groups.

The work was intellectually challenging but most of all inspiring. I got to know the women I worked with well, and empathized greatly with their cause. On a personal level, I felt I learned far more from them than they did from me, and I came to like them tremendously and admire them enormously for their courage and tenacity.

As a woman living alone in Kampala, I felt very safe. Ugandans are some of the most welcoming, open people I have met anywhere in the world, and I felt comfortable from the start.

I lived in a private apartment that I rented from a retired Ugandan couple, and learned to navigate the crazy public transportation system so I didn't feel isolated. I spent time with my landlords, my colleagues at the NGO, as well as some other AJWS volunteers.

I've lived overseas before, so I wasn't thrown off by things that might be viewed as hardships by many first-timers -- such as the constant power outages, internet failures, etc. My kindle and my reading headlamp were my constant companions.

I joined a local running group, and spent many weekends exploring Kampala as well as the Ugandan countryside. I ran a half marathon in Jinja - the "Source of the Nile" - and at the end of my stint with AJWS spent a week touring magnificent, beautiful Uganda. (Relatively untouristed, Western Uganda is spectacularly beautiful - I did some of the best hiking I've ever done and got to trek both gorillas and chimpanzees.) I also had the opportunity to spend Passover with a Ugandan Jewish community called the Abayudayah - a memorable experience that I will treasure always.

The highlight of my experience was being invited by one of my Ugandan work colleagues to attend a "kwanjula" -- a traditional Ugandan engagement ceremony. This was a colorful, fascinating, fun afternoon and I felt beyond honored to be invited. At the subsequent wedding, I was even more honored to be asked to make a little speech on behalf of my NGO -- which I did, in the local language!

Living and working in a conservative Indian city as a young, single, white woman has been the most challenging experience of my life. I would not be able to survive this year without the encouragement and guidance I get from AJWS. Knowing that they have my back makes all those times when I'm frustrated by the language barrier, lonely or feeling lost worth it.

AJWS has impressed me by how thoughtful, attentive and helpful the staff are. It meant a lot to me when the director of the program wrote me an encouraging letter after he heard that I had had a bad experience with an auto rickshaw driver. The staff have made me feel listened to, respected, and valued.

As a World Partners Fellow I have become more resilient, understanding and humble in ways I didn't know were possible. I'm only half way through the program but I know that I will never be the same again and will take the lessons I have learned from AJWS and from India with me for the rest of my life. 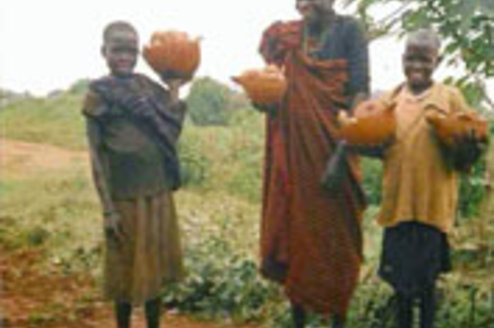 This summer volunteer program for college students in Uganda is... First tell us a little about yourself and your trip.

I first heard about AJWS when a member of my congregation spoke about their work in Darfur. I admire AJWS work, and I've always wanted to have an extensive, hands-on experience volunteering overseas, so this was a wonderful opportunity.

I am a lawyer. I worked in Kampala, Uganda with a grassroots NGO led by sex workers advocating for human rights and access to health care. My primary assignment was to build a human resources system for this organization - including everything from writing an employee procedures manual and templates for every sort of employment- related document, to teaching one staff member how to be an HR manager and how to create personnel files, to training the staff on what all these documents meant. I also helped the NGO with a number of other projects, including revising their bylaws and creating guidelines and templates for grant applications and reports to donors.

Additionally, I was privileged to go on a variety of field trips with the NGO staff, including workshops with members of the NGO (sex workers around different parts of Uganda) along with members of the health care community as well as police and other government officials.