Jump on Stoke's private train for a 24 hour tour of madness. Starting in London, enjoy a complementary breakfast, before boarding the BYO Stoke Travel Express to Edinburgh for Hogmanay (what the Scot's call NYE)!

Party people from all over the world gather to bring in the New Year at the world’s biggest street party under the stunning backdrop of Edinburgh Castle. There are 4 street party stages featuring various different music genres, and incredible firework displays that go every hour from 9pm to Midnight. Not to mention the festive Winter Wonderland Christmas markets and carnival rides!

Finish the night at Stoke's after party before hopping back onto the train and returning to London.

This program is currently not being promoted on Go Overseas by its provider. Check with Stoke Travel for the most up-to-date information regarding the status of this program. 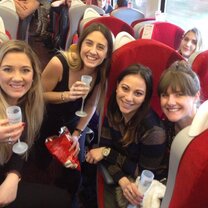 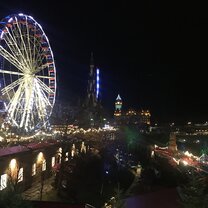 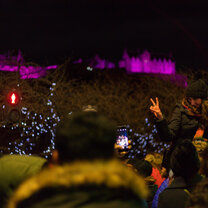 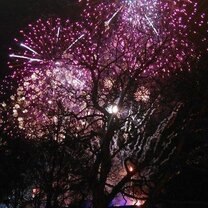 Was a fun trip for new years! Compared to the prices of the regular trains to Edinburgh I'm so glad I took this trip. Went with a bunch of mates and from experience the best advice I can give you is to pace yourself!!! It's a long day! Got a free bottle of prosecco at the start of the trip which was mad and the shapes we got given was a game changer. The train up was the best way to start off NYE partying on a moving train and making heaps of new friends. Big crowds in Edinburgh so a lot of queuing and waiting but thats a new years festival for ya.. taking a small backpack is essential ! Edinburgh police are super strict on the size of bags you can take in to the festival so check up on that. Other than that was a pretty sick time. When we weren't allowed back into the after party venue one of the staff took me and my mates with a big bunch of people to a different club so we stayed out till the train left. Slept the whole way back on the train so that was perfect. Would recommend using stoke if youre planning to head to Hogmany or even if unsure what to do for new years I can definitely vouch for this trip!

I had the best time on the Stoke train from London to Edinburgh. I really wanted to go to Hogmanay to celebrate the beginning of the new year but didn't have a lot of time off work. Stoke provided the best pre party on the train as well as guidance to the Hogmanay festival. It was a really long day but the train ride home provided a great opportunity to gain some rest. Would definitely recommend to anyone else looking for a fun and unique way to celebrate New Years Eve!

What would you improve about this program?
Providing a chill out area for people once the partying becomes too much
6 people found this review helpful.
Helpful 

The Hogmanay train on NYE was great for many reasons! I was travelling alone and it was possibly one of the easiest ways to make friends and socialise in. The staff were extremely inclusive and it was the perfect environment for me as a solo traveller and also for the many people I met going in groups.

It was well organised, we had breakfast and were given champagne and snacks to take on board (packet of chips and juice) not gourmet but still tasty! The train left on time and the party kicked off as soon as the train departed.

There was an MC over the speakers and staff moving from each carriage, we had freedom to move around, drink, played all kinds of games and as a surprise they gave out boxes of shapes to all the carriages (all aussies will know how good that actually is)

Arriving In Edinborough was easy and we had the freedom to do as we pleased. I’d recommend taking warm clothes and a small backpack as they don’t let big ones in.
After the festival there was an after party which was your usual club get up. Unfortunately the club owner kicked everyone out for being too rowdy and we had to wait 2 hours until the train station opened, but I guess we can’t blame stoke for that. I’d say a few other people weren’t happy with waiting however if you’re up for a huge party on NYE and are in the right company you’ll be fine!

After that we were on the train home and I slept the whole way. Overall I’d rate 9/10 as the party element was exceptional and so welcoming, Stoke provided the best way to enter 2018. I would highly recommend this for anyone travelling in groups or individually!

See you next year Stoke Tavel!

What would you improve about this program?
The only negative is that the train wasn’t cleaned between arriving and leaving Edinborough. But that’s not really a huge issue. Overall a fantastic night!
6 people found this review helpful.
Helpful 

This was the perfect trip option for me for NYE as it allowed me to go to the biggest Street Party in the UK, travel like a VIP on a private train and meet some awesome people from all over the world! It was also super convenient as once I booked and paid for the trip I didn't have to worry about a thing. Check in was easy, we were given breakfast, venue was close to the train station, all tickets were included and as a bonus we got a bottle of bubbles to celebrate the end of the year!
If you don't have a lot of money (or time) I would definitely recommend this 24 hour tour to Edinburgh for a great experience that you won't soon forget.

Went on this 24 hour party train from London to Hogmanay and loved it! Stoke Travel really got me excited for it from the word go, with a nice breakfast roll in the morning and a few drinks to start it off right.

The train up was buzzing and you could feel the good vibes the whole time! We celebrated different countries New Years at different times (even North Korea!).

We all got a bottle of bubbles to celebrate in style and the train was super comfortable.

And I hadn't even arrived yet!

The street party was insane and had really cool stages and carnivals and the christmas market was still going which was nice to see.

Really good organising by I believe her name was Liv? and the team, they always knew the answers to any questions.

By the train ride home I was pooped and was able to recharge the batteries.

Stoke Travel are a European tour and accommodation provider based in Barcelona. We are known for our surf, festival, and party tours all over the world, with prices and packages catering for backpacker budgets. Come join the party at dozens of different events, like Oktoberfest, La Tomatina, and Running of the Bulls. When you're ready to ride some... END_OF_DOCUMENT_TOKEN_TO_BE_REPLACED