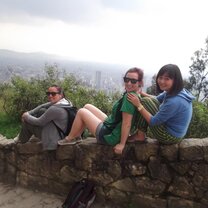 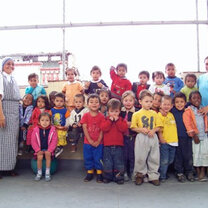 I am from the United States of America. I have been blessed with a life that is abundant in opportunity and choices. I live in a culture that is more about satisfying wants than needs. I have more than I need and wanted to do something for someone other than self and family. I signed up to volunteer in Bogota to help feed the homeless for a week. I admit, I picked Bogota because it was relatively close and I went for only a week, in case I did not like it, I figured I could survive almost anywhere doing almost anything , if it is only for a week. From the moment I arrived, it turned out that getting out of my comfort zone, was the right decision for me. I do not speak a word of Spanish, but that did not prevent me from making the most of this adventure. From the staff to the programs themselves, were all well organized and exciting in a spiritual way. Even though I had signed up to feed the homeless for the entire week, I was encouraged to experience the other programs, so I did. I was able to work in a school built by the UN, where we taught English to 1st; 2nd and 3rd graders. The kids could not have been more excited and appreciative. They were adorable, and despite their surroundings they were eager to learn and they touched my heart. Everyone should have a chance to work with children, who come from difficult backgrounds and are filled with love and curiosity. I was also able to work in the orphanage where I had a similar experience. The children crave attention and physical contact. I thought it would be depressing, but instead it was uplifting. Putting a smile on an orphans face, if just for a day, was worth the trip to Bogota. Finally, I worked with the homeless in two different programs. I was amazed at how much they appreciated, what seemingly little we were providing them, until I realized, that a hot meal and something cold to drink was not a small measure for them. Volunteering is easier than I ever thought. I haven't shared a room with others in 30 years, but learned that isn't so bad either. The biggest sacrifice for me was losing sleep, with six of us sharing a room. This however was a small sacrifice for the gratitude of those we helped, both the staff and the benefactors of our efforts. I plan to do this work every year. I hope to get others to start losing sleep over the thought of others in the world whom we are not doing more to help out. Thank you IVHQ and Emerging Voices for making my experience possible and enjoyable. The personal rewards of volunteering cannot be quantified.

What would you improve about this program?
By more people volunteering. But then you might need a bigger house.
45 people found this review helpful.
Helpful 

I came to Emerging Voices wanting to help and make a difference and I feel like the program, the coordinators, children, community and adults you work with have impacted me so much more than I ever thought possible. The coordinator, Monica and her assistant Beto were knowledgeable, helpful, supporting and encouraging. I could not have imagined a better team to organize and assist with the volunteers. The various projects had variety and some had instant gratification of the work you accomplished and others were slower to show but still just as amazing to see. Working with the kids at the Nelson Mandela project was the one I dedicated the majority of my time volunteering with. A typical day at this project included childcare in the morning, we taught various skills or concepts such as telling time in english. Working with the local schools' gym class teaching, practicing and playing volleyball and teaching the advanced english class in the afternoon. One of my highlights from the trip was spending the hundreds of dollars my community back home in Canada donated to this program. The coordinators were more than helpful with this, helping me figure out the best uses for the money. It was one of the most amazing opportunities I've gotten to do- for the soccer team at Nelson Mandela we purchased new soccer uniforms, balls, and other equipment to allow the kids to play in tournaments against local teams. We bought the girls volleyball team a new volleyball to practice with. At the project Marea, an alcohol and drug rehabilitation centre for youth, the money went towards fixing their old basketball court so it was useable and gave them two new basketballs, and a soccer ball. Seeing the kids, from each of the projects playing with the new sporting equipment was indescribable, I was without words and my heart felt full. The only difficulty I encountered was leaving; I wish I would have signed up for a longer period of time to stay in Cartagena and volunteer with Emerging Voices. I am so grateful for the opportunity I was given.

What would you improve about this program?
Some of the projects are only half days 8am to 12pm. So if you decide to do that specific project you're day is done early, it would have been awesome if you could go to another project after lunch until 3 so it would be a fuller day.
47 people found this review helpful.
Helpful 
Read my full story

The company I've been volunteering with is great with keeping communication open and solving any issues that arise. Bogota is a very fun, welcoming city with lots of opportunities.

Program
Volunteer in Colombia with Emerging Voices
Kaitlyn is an adventure junkie from British Columbia Canada. She recently graduated with her bachelors of Kinesiology and is now a practicing Kinesiologist. She values and lives a healthy active lifestyle enjoying hiking, swimming, running and scuba diving. I planned two months for travelling after graduation in South America so I knew it had to be somewhere close. Cartagena, Colombia had everything I was looking for- beautiful beaches, a sports development program, and awesome reviews.

After graduation I was contemplating the idea of going back to school to become a teacher so I thought working with children and youth might allow me to explore my possible career options. However, it became more that that- volunteering and working with those kids completely changed my life.

I choose to study abroad in Cartagena for many reasons; I wanted the opportunity to give something back- to do something good where my skill sets could benefit others. I wanted to experience the Colombia culture from the inside out, being able to interact in a hands on way with a new culture. This also would push me out of my comfort zone and gain some confidence.

Some of the most important things I learned were to appreciate how fortunate I am to live where I do. I learned to not take life so seriously and to be grateful for the things most people take for granted.

I vowed since returning home from my trip to never purchase another Aquafina, or any other plastic water bottle- we’re fortunate in Canada to have clear, clean and purified water right out of our taps!

I learned that even if my change and impact was small it’s ripple effect can result in a much larger impact. You’re influence is making a difference and every small actions counts! This can be as simple as making someone else smile or teaching a student how to correctly kick a soccer ball – you ARE making a difference!

Emerging Voices is a non-profit organization based in Colombia. We work with international volunteers in different community development projects throughout Bogota and Cartagena. Our goals are to improve the communities that we serve by providing educational opportunities, helping with renovation and construction projects, aiding the homeless and... END_OF_DOCUMENT_TOKEN_TO_BE_REPLACED Colombia
5.00 •5 reviews
Assist in providing community and medical services to those in need...
View Program 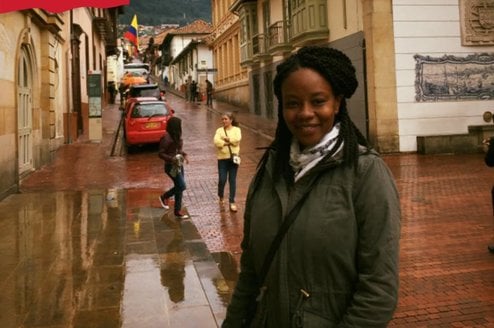 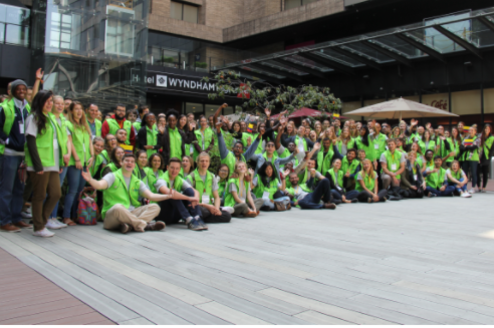