I am a 35 year old guy from the Netherlands who had a Master&#039;s degree in Biology (Biodiversity and Sustainability). I love Africa; worked, lived and travelled through 12 differnt countries.

Erik van de Ven is bald, Dutch and has a passion for Africa and her wildlife. He has a Master's degree in biology from Leiden University in the Netherlands. He loves adventure, nature and reading. 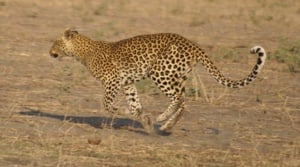 I wanted to get away. My passion for wildlife and Africa led me to this GVI programme. How could I resist studying Africa's large predators? Going out twice a day to look for lions, cheetahs, spotted hyenas and even leopards!

That I had the best time and that is was money well spend. I showed them my pics and told them about my close encounters with leopards, lions and cheetahs. Excellent, passionate, profesional and fun loving GVI staff who teach you everything you need to know.

Do IT! Book Now! Get your ass to Africa ASAP!

Karongwe Private Game Reserve, situated in the Limpopo province in South Africa, is the home of a permanent team of researchers, which is supplemented on a regular basis with volunteers from all around the world and I was one of them.

The research is focused on the interactions between the larger carnivores, so daily we would trek down the resident lions, cheetahs, spotted hyenas and of course the leopards. During the first week we weren’t able to get a glimpse of any of the leopards, known to call Karongwe home. We were especially interested in a female leopard called Tilo and her two young cubs.

One morning we were trekking Tilo but couldn’t go on when we hit a large drainage ditch (Karongwe is made up of several old farms). We could hear her calling her cubs and we could clearly hear that something was wrong for she sounded stressed. Later that day we were trekking her again through the dense bush when all of a sudden we heard the squeals of a warthog.

So we were on the right course but would we be able to see her and her cubs this time? The grass was getting higher when I spotted movement in front of the vehicle and shouted to the driver/ guide to stop immediately. As the driver hit the brakes a leopard, we later determined was the elusive Tilo, broke cover and dashed away from the car, settling some forty metres away.

In front of the car was what appeared to be the carcass of a freshly killed warthog. But appearances can be deceiving for the warthog got up, looked around and ran off. He ran off in the direction of the waiting Tilo, who tackled the warthog and made the kill.

Afterwards she disappeared into the undergrowth. We decided to come back later. After spending some time with the resident lion pride on their freshly killed impala we went back to the warthog carcass. It took us awhile to relocate it because the carcass had been moved and when we finally found it, there was no sign of the leopard.

After staring at the carcass for several minutes, at a distance of course, we saw some movement: a baby leopard walked over and around the carcass like he had killed it himself. We spotted only one cub but we couldn’t be sure. We feared that the other cub had died and that that was the reason Tilo was calling that morning.

Several weeks went by and we had occasional sightings of Tilo and her cub; our worst fears had come true, Tilo had only one cub.

One morning we were trekking Tilo again and doing some serious off-roading when we spotted her in the yellow grass looking straight at us. We wanted to get a closer look and see if her cub was with her but the driver/ guide told us that there was a big rock between us and the leopard and that he couldn’t get around it.

The rock didn’t look too big to us. But was it a rock? It looked odd. While we were writing down our observations Tilo kept looking in our direction and stayed out in the open, which was unusual for this shy animal. When Tilo picked something up in her mouth it became clear to us that we had misinterpreted the entire situation because what she had picked up was the head of an enormous 14 feet African rock python.

What we had assumed was a rock was the body of the python filled with a fresh kill. We realised that we were witnessing something amazing. We edged a little bit closer to get a better look and noticed that the leopard cub was there with his mother, hiding in the grass.

After Tilo made sure that the snake was dead by biting it repeatedly on the neck, her cub started playing with the dead python’s head. What an awesome sight. When we returned that night to see what the leopards had done with the dead snake we observed something quite unusual: the python was still in one piece, except for a large tear in its abdomen.

The leopard had removed and eaten what was inside the python. So the question on our minds was: has Tilo killed the python to protect her one remaining cub or had she killed it for the easy meal inside its stomach? Whatever the reason it was an unique sighting I will never forget.

Is it Africa safe?

Yes I think so. It's not more unsafe than any other continent. There is malaria medicine you can take. GVI staff are always with you on game drives and walk and they carry a riffle just in case (only in the bush mind you and just to scare off any animals that form a direct threat). I feel more safe in the African bush than any major city in the world!