What made you decide to look into study abroad this summer? What drew you to Abbey Road? 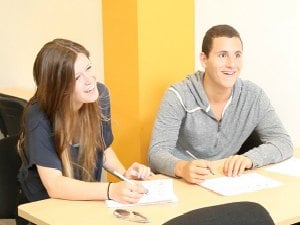 Nicole: I knew I wanted to do something, but I wasn’t sure if I was going to be allowed to study abroad. I spoke about it with my parents and after some thorough research we thought that Abbey Road was perfect for me.

They let me go and I’m so happy that I did it! There were five programs that we found, but we felt that Abbey Road would be the best.

We didn’t want it to be the typical teen tour. I was going to be a senior in high school and I wanted to get more out of this experience than just what a teen tour would provide.

We also wanted it to be a cultural immersion experience.

It was really the safety aspect that made us choose Abbey Road. My parents were so happy about that.

Did location matter? Why Barcelona?

Nicole: Yes. I have always wanted to go to Barcelona. I love the fact that it’s a bigger city and there are a lot of beaches. I wanted to be somewhere where everyone spoke Spanish. The only downside of Barcelona was that they spoke Catalan, but everyone knows Spanish so it ended up working out just fine.

I also chose the Barcelona program because I also wanted a pre-college experience over a homestay. For me personally, I was going to be more comfortable living in a residence with other students than living with a family I didn’t know.

Have you or anyone else noticed an improvement in your Spanish?

Nicole: My Spanish has definitely improved. I had been taking Spanish for so long and when I first got there I thought I knew a lot and that I would be able to communicate.

However, I found it to be really difficult at first. To be able to find the right words in my head and be able to match them from English to Spanish, but by the end of the program it became almost effortless.

I knew what to say and how to say it and I was able to read the menus and speak to waiters and people in the metro station. I was pretty much almost fluent in the language by the time I was done.

There was a month in between the end of the program and the start of school and I didn’t really speak any Spanish. I thought it was going to be hard to go back to speaking Spanish, but as soon as I walked in to my classroom and my teacher was only speaking in Spanish, I understood everything she was saying.

All of my friends were so impressed and really it’s because of the four weeks I spent in Barcelona.

How did you like the staff? How do the instructors compare to those you’ve learned from in the past?

Nicole: I loved all the staff on my program. They were all so nice and they liked to have fun with us and be safe. They taught us a lot and I really appreciated that. They were all wonderful.

I think my instructors are obviously a little different than the instructors I have back home. They really took our learning outside the classroom and into the real world of Barcelona where I learned show much more compared to traditional teaching methods.

Has anything about this experienced changed you?

Nicole: I matured a lot when I was away for the four weeks. I was by myself. I learned how to make new friends and in fact I still talk with my friends from Barcelona every single day.

By the end of the program I really learned a lot about how to manage for myself, meet new people and be more confident.