Skip to main content
Niel de Jong travelled in Asia (Thailand, Laos, Vietnam, China and Nepal), spending a month on the Chinese school Omeida in Yangshuo, Guanxi. Niel is a 21 year old, male student, who finished his bachelor in Future Planet Studies at the University of Amsterdam last year. The coming year he will start an Erasmus Mundus master in Ecohydrology that will bring him to Poland, Portugal, Argentina and back to the Netherlands. In addition to his interest in sustainability, Niel likes rock climbing, playing soccer, everything that has to do with music and (obviously) travelling. 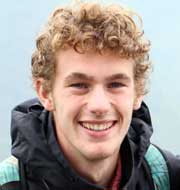 Why did you decide to study abroad with ​​Omeida Chinese Academy?

Niel: I was already travelling in China for 3 weeks when I first emailed Omeida. In rural China nobody speaks English and my very limited travelling Chinese was nearly enough to survive. It was certainly not enough to ask all the things I wanted to!

I decided that in order to experience a different side of China, I wanted to stay put for a while and learn Chinese. In addition I could then get to know one place better, meet people and make friends. I contacted a couple of Chinese schools in Chengdu and Yangshuo and out of those the response from Omeida impressed me the most. They helped me with everything, responded quickly and consequently convinced me to study there.

Niel: I think it were the people that I met that formed my experience the most. At Omeida there is a Chinese department of international students learning Chinese and an English department with Chinese learning English. Departments, teachers, students; they mix well and so I made friends on both departments.

I loved talking about China, comparing all sorts of things, with my 'international' friends, while my Chinese friends could actually explain a lot of these things. Of course that worked both ways. Overall I just talked a lot, I learnt A LOT and I as a result I now got the idea that I actually understand China at least a little bit. On top of that the environment of Yangshuo is definitely something else.

Niel: A large part of the Chinese culture is focused on food. Every region has its own specialties and the Chinese love to talk about it and discuss which is best. Consequently, eating is a big social activity and over the month I have visited many different styled restaurants, hotpots and noodle-stands.

There are some rules as well like: 1) If you leave food, leave the rice. 2) Never put your chopsticks in the food vertically (you'll send it to your ancestors) 3) Never eat alone and share always. 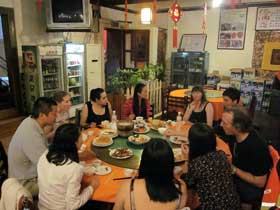 I love that last rule, it is so much more better than the Western individualistic style of dinner. You try more and it's a lot more social. On the other side, after dinner the restaurant often looks like a battlefield after a food war; food is everywhere but on the table.

Niel: I only stayed in Yangshuo for 1 month, but when I was leaving Yangshuo I had made some great friends. Friends I definitely want to see again when I go back to China. The day I left one Chinese friend gave me a typical Chinese painting of flowering rapeseed, which you can find a lot around Yangshuo.

He in turn had asked a friend of his, who studies painting at the art academy, to make this painting for me and had it sent over from Changsha. I took it with me across Asia and with a minimal amount of damage it is now it´s right before me at my wall. A beautiful souvenir with a great story and loads of memories behind it.