What led you to choose UBELONG for your volunteer trip to Peru?

I was initially exploring my volunteer options with IVHQ, but I decided on UBELONG because it seemed like a smaller organization. I wanted one-on-one attention and the freedom to ask a question, or get information if I needed it. When I applied to my program, my UBELONG advisor almost immediately responded with my acceptance. It was the direct, personable attention I wanted, so I was instantaneously convinced that I wanted to continue with UBELONG. 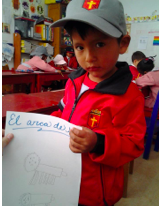 Additionally, UBELONG had variety of programs, including several in South America, which is where I wanted to go. Unlike other programs, they also gave me the chance to choose whether I wanted to stay in a homestay or a volunteer house. The size of the organization allowed for more options as a volunteer and a great experience over all.

What was the most interesting cultural experience you encountered?

There was this craze about this dish called Chiriuchu in Cusco and all of the suburbs. Chiriuchu was the Quechan word for “cold dish.” It consisted of fish eggs, which were flavorless and crunchy, a hunk of really rich cheese, a piece of cuy (guinea pig), seaweed, chorizo, a piece of chicken, dried corn, corn bread and peppers. 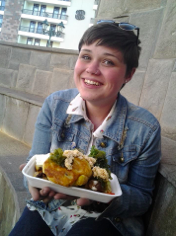 One day I walked into the kitchen for breakfast and I saw three skinned guinea pigs, complete with teeth and claws, stuffed with herbs and spices. My host family and I ate chiriuchu for lunch that day. I can’t say I enjoyed the dish, but it was a pretty interesting cultural experience to say the least.

What did you find most surprising during your experience?

After my first week of work, I discovered that even though I was on the other side of the world, people were no different than they were in my home in Ohio. I am not sure what I expected. I did not expect a place that was so foreign to me to be so familiar simultaneously.

People rode the bus with me in the morning to work, somewhat disheveled, as if they pressed snooze one too many times. The teachers I worked with were constantly sick from the never ending colds and flus that circulated around the school. The teenagers went to the clubs and bars on the weekends, ready to test out their new found legality on a beer or two. I learned that life, no matter where it takes place, goes through the same motions, and that is remarkably comforting and beyond surprising. 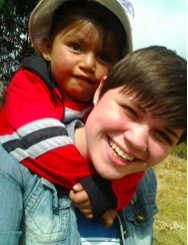 There was a little girl in my class who seemed to have a love/hate relationship with me. She loved to deliberately rebel in ways that tested my patience. She was adorable nonetheless and very smart. She followed me around everywhere, so she became one of my favorite students.

My class went on a field trip one day and she was by my side the whole time being extra nice to me. She decided she wanted to hold my hand and she called me her “amiguita,” which means “little friend.” I felt like she finally admitted to liking me, which was a huge win for me. After learning that she liked me after all, I felt like my volunteer experience was worthwhile to the students. I was making a difference and realizing that moment was really special.