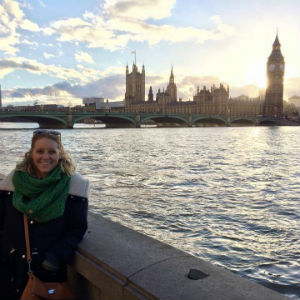 McLaren: McLaren is a Kinesiology Major at the University of Arkansas but she is originally from Kansas City, MO, where she grew up with a love for sports like volleyball and soccer.

When her oldest sister studied abroad in Germany while McLaren was still in high school, her parents surprised the rest of the family with a vacation to go see her sister. This little trip sparked McLaren's travel bug and now all she can think about is traveling more and more since her own experience abroad in Brighton, England!

McLaren: One of my trips was going to four cities in Portugal and Spain in a week and a half with some of my flatmates. One day we were in Seville and were wanting to find one of the city's biggest landmarks called the Plaza de Espana. We got lost down one of the side streets and ended up standing around for 10 minutes, searching for street signs and fumbling with our torn up map.

Suddenly, this elderly couple came up to us and started rambling things off in Spanish, pointing to the map and trying to communicate. Luckily, my friends and I had taken some Spanish in high school so we could make out some of the things they were saying. We tried to tell them (in horrible Spanish) that we were looking for the Plaza and next thing we knew this couple was taking us on our own personalized tour of Seville, taking us by the Palace Gardens, the giant Cathedral and one of the largest shopping areas in the city!

This couple not only helped us to get to the Plaza de Espana but they took a full detour in their walk to show us the beautiful landmarks of the city. Seville will always hold a special place in my heart because of that lovely couple and their generosity, kindness, and hospitality. 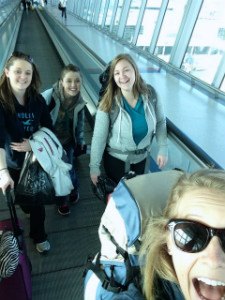 McLaren: One of the most memorable experiences I had was being able to go on a trip to an unknown city alone. I did a lot of my traveling during the semester with my Brighton friends so it wasn't until late in the semester that I had a chance to go to Edinburgh, Scotland by myself.

At first, I had considered not going because I didn't want to go by myself but then I realized that I would never have this opportunity again; that I wouldn't have this perfect chance to navigate an international city alone with different foods, transit systems, dialects, and culture.

So I went to Scotland alone and it was one of the most rewarding trips I took during my entire semester. I got to see whatever I wanted and even met some other students in my hostel who were also studying internationally. We went to some pubs one night where I met some locals and learned all about the everyday Scott's life.

I even went on a Highland coach tour and saw some breathtaking landscape views. If I hadn't studied abroad I wouldn't have had nearly as many of opportunities as I did but traveling internationally completely alone, even if it was for one weekend, was one life changing experience that I will never forget.

McLaren: My biggest piece of advice would to be to go for longer! I always knew that I wanted to study abroad and that I wanted to go for at least a semester so I could travel around where I would be studying. However, looking back on it, I wish I would have researched more about the year long program because now all I want is to have had more time to go more places.

Brighton is so perfectly located, allowing you to travel to the European mainland so easily and yet you still live in an English speaking country which makes for an easy lifestyle when not traveling. I wish I would have realized how amazing of an opportunity this was beforehand because I don't know when I will be able to go back to Europe and go to some of the places I wasn't able to. I guess just overall, try to plan ahead and make sure you take full advantage of this opportunity you are being given.

McLaren: This trip made me realize how little I knew about the world and myself. Studying abroad challenged me in ways that I didn't know were possible. Whether it be the education style or trying to navigate new cities, I have grown to love new experiences and the unknown rather than being intimidated by it.

Before England, I figured I would come back to the states and my plan for grad school and a career would continue as before but since being abroad, I only want to travel more and have started to look into graduate schools in Europe. I think nothing would be more exciting and fulfilling than not only studying in a different country but living in one for three-four years to complete my education.

Even if that doesn't work out, I would still love to be able to travel internationally within my career and will seek out any opportunity within my field to do so. Studying abroad has changed my life for the better and I can't think of a single reason why anyone should not do it.

We offer semester and yearlong program, with the opportunity to take classes from a variety of subjects. Our team, Mary, Zoe and Becca, are on hand to help make your study abroad experience be the best of your lifetime. As well as onsite orientation and class enrollment, we arrange and attend field...