With its rich history, beautiful scenery, and some of the world’s most recognizable travel destinations, Peru offers Spanish learners not only the opportunity to learn but to experience.

Peru is said to be one of the best places in the world to study Spanish because the accent is largely neutral among Spanish speakers, it's spoken slower, and it doesn’t rely heavily on slang or regional dialects.

Furthermore, Peru is known for its friendly population, mouthwatering cuisine, and mystifying historical, cultural, and geographic destinations of interest. All this in a country that remains very affordable by most standards with the infrastructure to get you where you need to go. Learning Spanish in Peru is for you!

Although it’s probably the priciest of the options listed, there is steep competition between English language programs -- especially around Cusco -- which pushes prices down to a very reasonable level for private study.

This is a great way to learn Spanish in Peru because you get individualized lessons that move at a pace you’re comfortable with, and a teacher devoted to answering all your questions and guiding your individual study.

These courses are generally the best to look into if you're only looking to spend a couple weeks learning Spanish in Peru, either as part of a vacation or longer trek through South America. Some will even include excursions or cultural activities as part of your course.

Lastly, certified group courses are more easily transferrable for college credi if that's a concern of yours.

If you’re concerned with transferring college credits, this is probably your best bet. The curriculum and schedule will be more rigid, but you can generally count on quality in instruction. A classroom atmosphere will also serve to introduce you to other students for study groups or buddies for soaking up the local atmosphere.

Lima is a modern metropolis with a Spanish accent. Culturally, you’ll find all the offerings of any big capital city in art, a vibrant nightlife, delicious dishes, and a heavy emphasis on business.

Spanish is spoken faster here, but people are friendly and patient. You’ll also find a good deal of English speakers to help you out if you’re still a beginner.

As with most big cities, the price of living is a bit higher. But you'll benefit from a developed city infrastructure, including a city-wide metro system to make transportation cheaper and faster. You'll find a vast difference in poorer areas of the city with far less infrastructure.

For the seafood and waves crowd, there are world-famous surfing beaches and a beautiful, sunny climate year round. And some of the best ceviche in the world!

Cusco has been attracting foreigners for years with its charming colonial architecture, mystic spiritual offerings and proximity to several other popular traveler destinations including Machu Picchu.

Perched high in the Sacred Valley of the Incas, you're never far from breathtaking mountain panoramas and a rich history of fascinating indigenous cultures, many of whom have left a mark on the contemporary culture in language (Quechua) and cuisine.

Thanks to the influx of tourism in recent years, you'll find an abundance of Spanish schools offering reasonable prices, but you are also more likely to run into street swindlers and pickpockets at local markets. Not to mention the pollution!

Lastly, be prepared for the height. Altitude sickness affects visitors to varying degrees, and unless you’re not used to it, you are pretty much assured to need time to acclimate. The local remedy is a hot glass of coca tea, or chewing dried cocoa leaves raw.

Iquitos is the largest city in the world unreachable by road. You’ll need to take a boat or plane to reach this river island. Situated along the Amazon River, it’s a great place to study if you plan to head into the rainforest or tour the Amazon itself.

The area experiences a lot of flooding during the springtime rainiest season, but the temperature stays a balmy 70-90 degrees year-round. In addition to Spanish programs, there are a number of ecology and preservation research projects going on in the area, many of them looking for volunteers.

Student visas are pretty simple in Peru. In fact, you don’t need one to enter. All students enter under tourist visas. If you plan to study Spanish in Peru for more than 180 days must apply in Lima for status change to student. (For a fee.)

Most program participants are college and post-grad age, but in Lima you find a mix of older business professionals. Since there’s so many visitors to the area, you can study Spanish starting at any level of proficiency, whether you’re an absolute beginner or on the verge of fluency.

There are a ton of things to see and do and ways to interact with locals that enhance your learning experience. Machu Picchu is by far the most popular destination, but there are a number of other sites to explore such as the mysterious Nazca Lines, treks, ruins, and local villages.

The reasonably priced Boleto Turistico includes 13 sites of interest and museums around Cusco; most programs will help you arrange purchase and transport. Street parades are popular in the bigger cities, so don’t be surprised to run into a celebration and vibrant traditional dress around town.

There are no shortage of travel agencies to help arrange transportation and entrance to events and destinations, some of whom you can actually haggle with. PeruRail also provides quality and upscale transportation to most major cities.

Budget travelers may take advantage of Peru’s alternative transportation methods, namely busses. The routes are longer, but you definitely get local experience. Cabs are generally not too expensive either, but be sure to agree on the price beforehand or insist on a meter (if available). Hostels can be found for under $8 - $15 a night, and most include breakfast.

As mentioned, Spanish schools are competitive with one another, so you’ll find competitive prices if you do your research.

Touristic restaurants abound, but there are also more low profile places to grab cheap eats. Look for places with a lot of locals or take advantage of the numerous street markets to make your own! Must trys: Papas a la huancaina (potato-based salad with creamy egg and chili pepper sauce), ceviche (Peru’s national dish of seafood and citrus) and traditional Andean cuy (guinea pig!)

Many programs, especially through universities, have scholarships. Some independent programs offer them as well. Ask the program you’re interested in if a scholarship is available, but know that in general, you have to apply through the school directly. Another scholarship resources worth a try Spanish Studies Abroad, specifically for Spanish students. 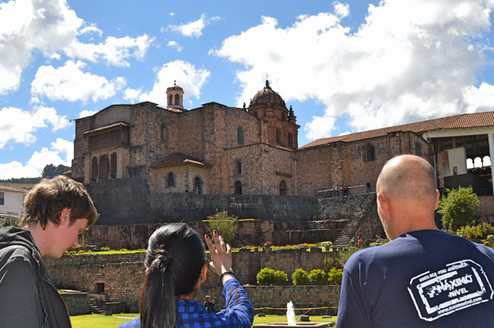 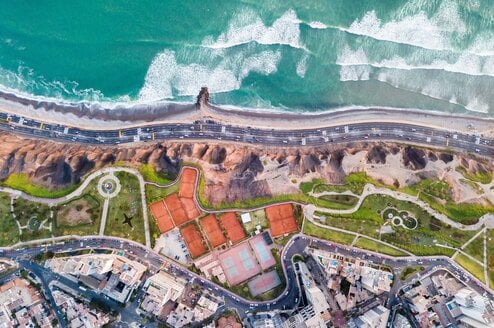 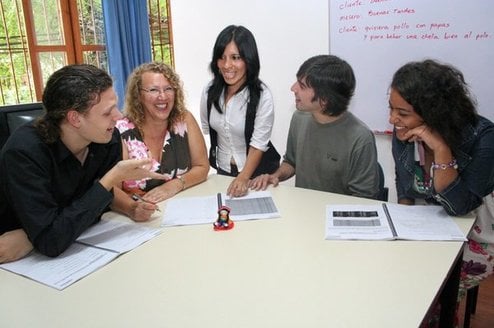 What about going on a vacation of a lifetime, significantly improve...
4.00 •1 review Learn Spanish in Central or South America while traveling

Learn Spanish in Latin America with adventure travel and volunteering... 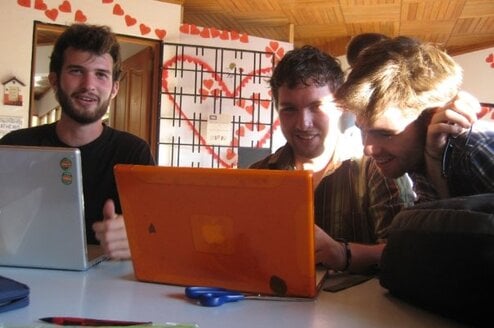 Learn Spanish in Latin America and Online with Amistad Abroad

We teach Spanish at all levels, varying from beginner to advanced.... 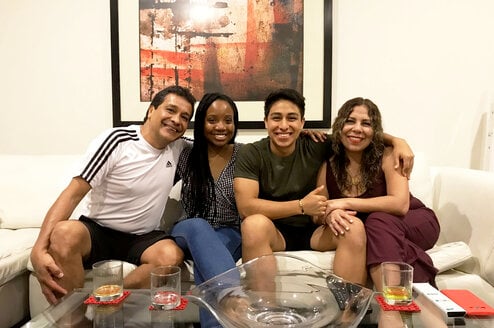 Peruvian Homestay Family - Half Board

Complete your experience by staying with a lovely Peruvian family... 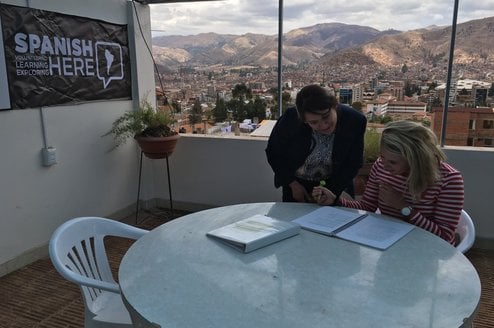 We are located in the city of Cusco, Peru, cradle of the Inca... 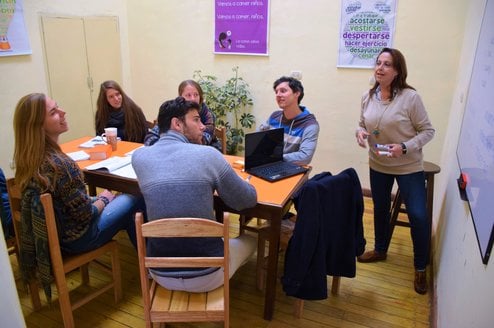 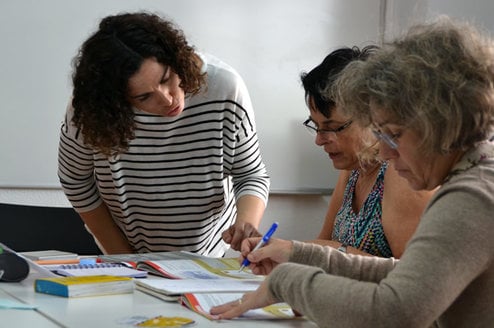 Club 50 Spanish courses – For mature students aged 50 and above! 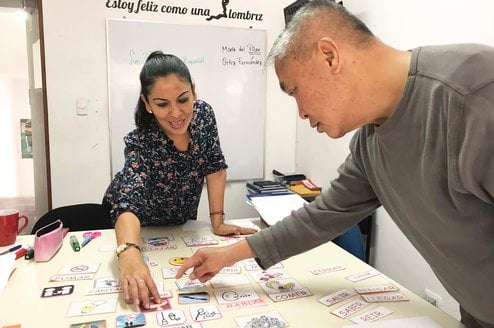 This group program combines in perfect balance the grammar and...