Hanze University's "Doing Business in Europe" is a fantastic way to broaden horizons and see how business works in Europe. This first-class summer school experience takes you on a journey throughout the European world of business. We offer 6 college credits, housing, lots of international lectures, both social and business excursions, plus a bike so you can travel like a local.

Ultimate Summer in Europe: 10 Cities in 5 Weeks with Forum-Nexus

The Netherlands: The Hague - Undergraduate Courses

So, I also went to Hanze Summer School in 2015, and I would do it again in a heart beat. We were challenged across the board, yet there was an understanding of the expectations set on us. I grew very close with a lot of the other summer school students, whether it was sitting next to them in class, exploring Groningen and Amsterdam together or going on a business excursion together, we had fun! I was almost in awe the entire visit as the experiences kept on rolling toward us. I've kept in touch with some friends I met out there and I can't thank my professors enough. Do it!

What would you improve about this program?
Housing could be improved by putting all students in one building.
Did you find this review helpful?
Vote up! 0
Vote down! 0

I participated in the "Doing Business in Europe: Marketing" segment of the program in the Summer of 2015. It is located in Groningen, NL at the Hanze University of Applied Sciences. In addition to fulfilling the GO Abroad Requirement at my University, this segment also completed certain credit requirements within my Finance major, which was certainly a bonus for me. The 3 main classes you take are broken up into various components, called modules, which basically means that you meet approximately 25 different professors. That might have been one of the coolest things about the classes; you got to experience so many different people and cultures. It really kept things interesting, and it was particularly helpful to have someone from, for example France, the Netherlands, or the United Kingdom, explain to you their own culture. Far more effective than reading about it second hand.

The Marketing program is pretty evenly split between classes and social fun. While you go to classes for most of the day (typically start at 8ish and go til 4ish with breaks in between), there is no homework, but all of your grade stems from 1 test and 3 presentations at the end of the program. The fun part though are all the social nights, meals, and field trips planned for you! Our trips included a daytrip to the historic fishing village of Marken and a tour of the Dutch lochs, "product confrontations" at the Grolsch Brewery and Hooghoudt jenever Distillery, exploring the skyboxes at the local FC Groningen "football" team's stadium, and a two day trip to Amsterdam which included meeting with Royal Philips executives and 10 hours free to roam the city! I might add that we stayed in a massive castle overnight while in Amsterdam, complete with moat and large gardens (awesome).

The living quarters are rather nice, single rooms, they give you all your bedding (convenient for packing), and you get a set of pots and pans to cook with in the communal kitchen, which is also rather handy. You don't have to live on take out if you don't want to. I lived in Winschoterdiep for half of my program, which was a 30min bike ride from the main campus, and Kornoeljastraat for the other half, which was only about 10. Winschoterdiep was cleaner, friendlier, and the rooms were bigger, but Korno was fine as well. Both had solid internet connections, so there's really not much to complain about, since you should really only be in your room if you're sleeping or working.

While living in a real castle for a night was rather cool, I personally probably got the most out of simply biking and running around the city. I'm a distance runner and decent endurance athlete, so exploring Groningen on foot (walking or running) or by bike could be hours of entertainment. Different parts of the city have vastly differing architectures due to either the age or the purpose of the area. Taking pictures of the various houseboats was especially interesting, since I had never been to a city with canals. Whether in the city center with all its churches, stores, and alleys, or riding around the neighborhoods farther out, the Dutch certainly know how to construct aesthetically interesting buildings in rather small spaces.

What would you improve about this program?
I would give kids a map of the city with the routes on how to get to school highlighted. It's not that hard for the Korno kids to get there, but from Winschoterdiep, it was rough in the beginning when we were trying to navigate in the rain off of memory of how they got us there.

I was fine (pretty hot blooded), but it seemed to be an issue for other people. Tell students (because they don't seem to do their own research) that a) it rains frequently and b) it might be cold for the first half or 3/4 of their program. That means they may want to bring both warm and cold weather clothing. It may seem excessive when you just read my review, but some kids figured "it's summer in America, therefore it's summer in Groningen" and packed only warm weather clothing. So, the first time it rained and was 55, there were some sad students.
Did you find this review helpful?
Vote up! 0
Vote down! 0

On the way to Center Square

Hanze University's "Doing Business in Europe" is a fantastic way to broaden horizons and see how business works in Europe. This first-class summer school experience takes you on a journey throughout the European world of business. We offer 6 college credits, housing, lots of international lectures, both social and business excursions, plus a bike...

END_OF_DOCUMENT_TOKEN_TO_BE_REPLACED Bring your interest in Dutch language, society, politics, and culture... 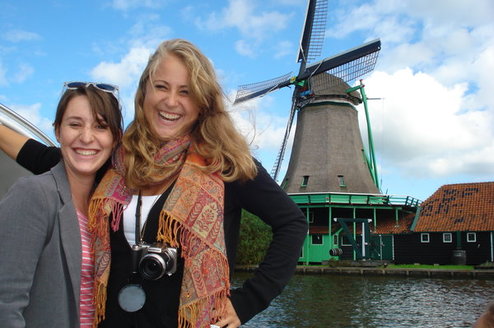 Study abroad in Amsterdam for the educational adventure of a lifetime... 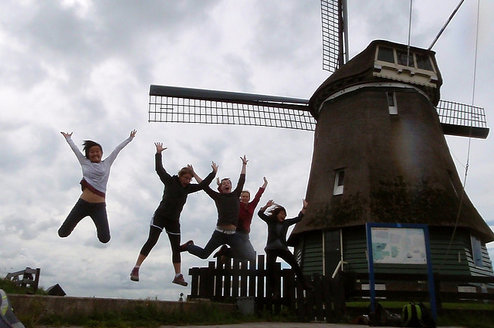 Amsterdam, a city long associated with notions of tolerance and...