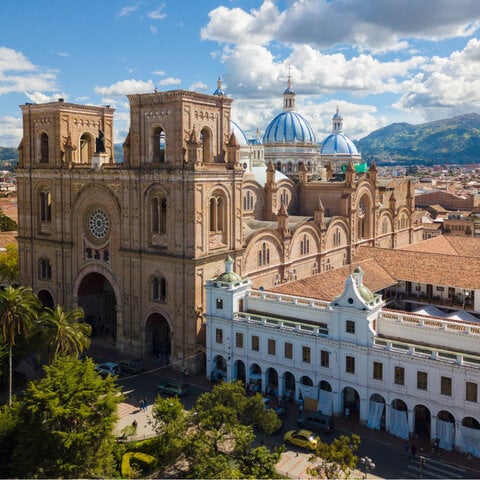 LanguageCorps' intensive, four-week TESOL training and certification course in Ecuador) provides participants with professional knowledge and skills in TESOL methodology, as well as teaching practice with local EFL (English as a Foreign Language) students. The 130-hour TESOL Certificate you earn is internationally recognized and will allow you to teach English in any overseas location. During training, the center’s staff provides counsel and guidance on CV (resume) development, what Ecuadorian employers are looking for, and provide contact information for schools that have teaching positions. The local staff is very helpful in making your transition to living and working in a new culture go smoothly.

While teaching English in Ecuador, you will also have time to go on excursions to different sights in Ecuador, including: the Amazon, museums, beaches, markets, archaeological sites, or horseback riding.

I had high hopes for this program, as I was dropping over $3,000 for the course, flight, immunizations, etc. I signed up for the TESOL Plus program for June of 2013, which meant I was supposed to receive extras besides the basic program, like a host family, spanish classes, and culture classes (it was also $700 more). However, I didn't even get some things that I initially paid for in the basic package.

LanguageCorps says that assistance with a cultural exchange visa is included in the basic program, however- you actually have to pay the partner institute (EIL) if you want them to sponsor you and assist you with the cultural exchange visa. In addition, they will only do this for you if you end up working for a school in which they partner with (It's confusing, I know). I ended up going with this option, and very much so regretted it. EIL was very disorganized, the staff didn't really know what they were doing, and we had to make numerous additional and unnecessary trips to the bank for our bank account, ministry of foreign affairs, SRI office, etc. due to the disorganizion and lack of communication. We even got deducted pay from the private school we worked at for all of these trips. Not only that, but because of the type of visa, we had to pay about $100 monthly and taxes and health insurance (which was already provided by the school that we were working for). Unless you stay in Ecuador teaching English until April, you lose all the money that was taken from you for taxes.

The Plus program also claims to include Cultural Awareness classes, but that literally consisted of a one hour lecture on culture. There are no excursions, tours, or anything like that included. They literally talked to us about living with our host families and gave us a map of Quito. We only had Saturdays and Sundays to explore the city and that was very difficult considering the courseload. They have many assignments due on Saturday afternoons which makes it hard to fully enjoy your weekend. Do not anticipate having time to take any trips as well while you're doing the TESOL course. The spanish classes the week before the course were great however, and I enjoyed them. The funny thing is they make it seem like they are going to put you in a class based on your level. However EIL stuck everyone in the same spanish class regardless of level.

The Plus program claims to include a re-entry package upon return to the United States. This was never provided, and it's still unclear to me what it even entails.

Besides relying on EIL for our cultural exchange visa, there were other issues we faced with them. While I was lucky and had a great experience with them for my host family, my best friend did not have such luck. Her "host family" consisted of two 23 year olds with a one year old baby, and no internet in the apartment. They would also make her late to classes, wouldn't come home until after 10 p.m. some nights, and yelled at her in front of their entire family for accidentally letting a towel fall on the bathroom floor. We even confronted the director of host familes at EIL and she said, "These things happen. Maybe buy them some chocolate". I kid you not.

The information on LanguagCorps' website is also very outdated. I know for a fact it hasn't been updated since 2012 (that is when I first started looking at their programs) Also- If you can live somewhere in Ecuador for $100 a month, it must be the jungle or some remote mountain town. Expect to pay minimum $200/300 in a small town, and $400/500 in cuenca or Quito. The beach is even more expensive. The pay can range from $800-$1000+ depending on where you work. Universities are where you really make money.

Overall, don't believe everything LanguageCorps has to say. Do your own research about Ecuador - however know that there still is very little online when it comes to resources. My friends and I found out the hard way that it's very much who you know. So if you can get to Ecuador through a program, it makes it a lot easier to adapt and get to know the country before having to just live on your own. However, I wouldn't do it through this program. It's misleading, outdated, and their partner school- EIL- isn't very dependable either.

I would go teach in Ecuador again in a heartbeat. I had an amazing time, people were great, I made some great friends, and had some great adventures.

Now for LanguageCorps: It's not worth the money. If you have extra cash lying around, and you are not interested in doing much work yourself, go for it. Otherwise, I suggest looking up TOEFL certificate programs independently. The cost of the school that I went to was 1,600 if I did not do it through LanguageCorps. It was 3,000 with them. So let's examine where that extra 1,400 went?

There was information before I left provided for me - guidance on the visa process, etc. I still had to do all the paperwork myself (medical vaccinations, police background checks, etc). There was housing when I got there, including meals. This was great that it was set up for me, but I moved out as quickly as I could, because I found (easily) an international hostel in the center of town for only 180/month (which is a bit expensive for what it is, but it's somewhere to start). They did not have job search support, other than a list of places to try. I had to find the jobs myself - I recommend a private school as they pay much better, especially for foreigners. Also, remember that private lessons are flexible, easy extra cash - a $30 advertisement in the newspaper will pay for itself in 3 or 4 lessons.

Bottom line: $1,400 is about 2 1/2 months of more than comfortable living in Ecuador - something I would have loved to have back when I was wishing I could stay longer.

If money is no issue, don't worry about it. If you want your hard earned savings to go toward living and experiencing another country and culture, do it yourself. Be a little adventurous!

Before leaving to Ecuador, LanguageCorps did an amazing time at answering all of my question (and I had lots of them!) in a timely manner. They were very patient with me in every regard and they helped with my itinerary. They certainly made sure that everything was running smoothly and that I was all set to go. Once in Ecuador, they handed me over to EIL Ecuador (Experience in International Living) and they were absolutely fantastic. The staff at EIL was nothing less than friendly and helpful.

The one concern that I had about teaching abroad through this program was that a job was not guaranteed; however, EIL was very proactive about finding places where we could apply to and interview for. So they made that aspect of the program a lot less nerve-wracking. In fact, I had a job lined up before the end of the TESOL course was done, and so did a lot of my other classmates.

Overall, my experience with LanguageCorps and EIL Ecuador was great. I would recommend not only going abroad through LanguageCorps, but I would also recommend that you think about going to Ecuador. It was breathtakingly beautiful, so much fun, and an experience that I will never forget!

Program
Teach English in Ecuador with LanguageCorps' TEFL Certification
The year immediately following her undergraduate graduation, Stephanie Almanza (23 year-old female from San Antonio, TX) decided to spend some time abroad in Ecuador. She spent her first month there completing a TESOL course in Quito and the next 5 teaching at a small private school in Ambato. According to Stephanie, her time abroad was a wonderful and life-changing experience that she will always cherish. 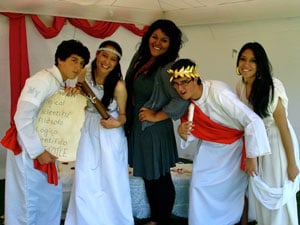 Morning: My mornings started incredibly early in Ecuador, waking up at around 5:30 a.m. every day and leaving my house by 6 or 6:10 at the latest. The teachers were provided transportation to school, so I walked to my bus stop which was about a 15 minute walk away and got on our bus at about 6:30. Upon getting to school, the teachers would head to their respective department offices and we would finish some last minute preparation before starting school at 7:10. Then the havoc began! It was a lot of fun. Regardless of the early mornings, I always looked forward to the start of the day.

Afternoon: The students finished school at 1:10 p.m. and most of them headed home; however, the school provided some extracurricular activities and classes that the students could stay for. Those included some after school English tutorials that I helped run. Before the tutorial classes, the school provided lunch for the teachers that had to stay. After that, we headed up to the tutorial classes, and then finally home at 3:10. Upon getting home, my roommates and I ran errands such as going to the market or grocery store as needed. We'd often walk around town and get out of the apartment before we continued with grading and lesson planning and all those wonderful duties that come alongside being a teacher.

Evening: In the evening, my 3 roommates and I either made dinner or went out to eat. Both options were pretty cheap in Ecuador. Depending on our level of stress, we'd sometimes even fit a night out to get a drink and just de-stress. Sometimes we would even go out to watch a movie or just hang out with friends elsewhere. We definitely had our fair share of options to choose from when we wanted to get out, including several parks, a botanical garden, the downtown area, plazas, and countless cafés. We loved exploring the town that we lived in!

Lots of people dream of traveling the world. However, many don’t ever make it happen. Since 2003, LanguageCorps has helped thousands of people to kick-start their international teaching careers. We take great pride in providing an exceptionally high level of client service and personalized support.

END_OF_DOCUMENT_TOKEN_TO_BE_REPLACED 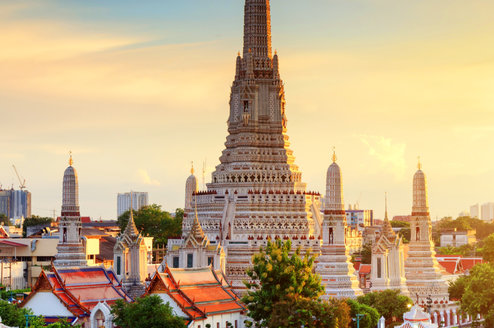 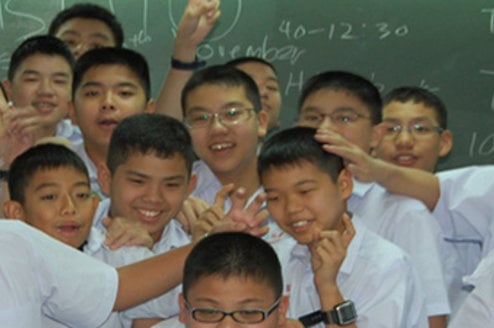 Vietnam is currently one of the best locations in the world to Teach... 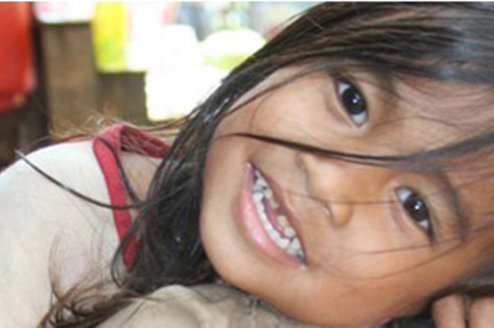 The TESOL Certification Course in Cambodia combines the essentials of...