You will be traveling with a group of fun, exciting and interesting people from everywhere in the world! Chat with other people from your group before you leave home! Groups sizes are usually between 6 – 15 people with most groups even celebrating reunions years after their trip!
Whether you’re after action and adventure, cultural exploration, beach-side relaxation or live to party, Vietnam is the place.

This beautiful country is a hidden gem filled with amazing sights, some of the friendliest people and unique travel experiences that you would struggle to find anywhere else!
Vietnam is definitely underrated as a holiday destination in SouthEast Asia: natural wonders, beach paradise, stunning scenery, moving history, buzzing cities, delicious food and one of the most beautiful cultures – you hardly find more diversity anywhere else!

Most people travel Vietnam with us either solo or with a buddy and are between 18 and 39 years old. 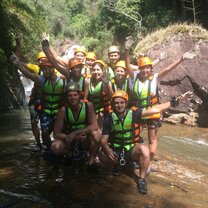 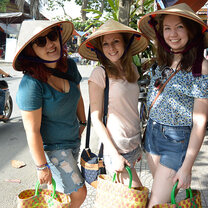 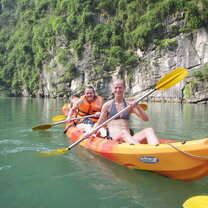 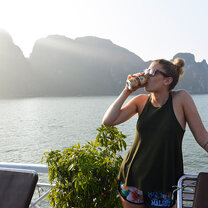 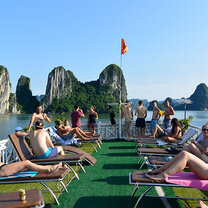 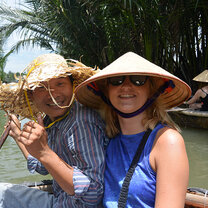 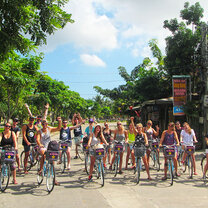 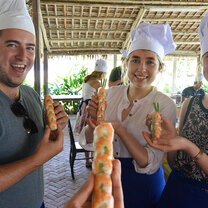 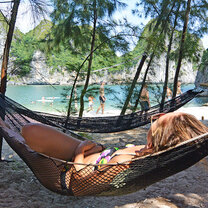 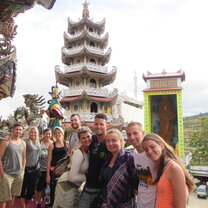 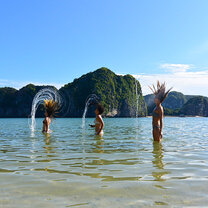 Having read all the reviews, we decided to join this tour. We had such an amazing time on our Vietnam tour and got to see so much of Vietnam during 13days. I can appreciate all that is written in the positive reviews. Service was great from the start. The other people who were going in our group was nice and friendly. They kept their word and that is very important. Much will depend on your allocated guide and we were very fortunate for our tour. Our leader Daniel was a really good tour leader with a humour. We spent a really nice time and learned many things about Vietnamese culture in our time. You get a good amount of time to wander in the stops, but it really is just a 'taster' style tour. I will recommend this tour to all of my friends.

This tour was so amazing. We especially enjoyed Island Private in Halong Bay, it was beautiful.We were allowed to branch off from the tour and see Vietnam our way and Daniel suggested many places of interest. , our tour leader Daniel made us feel very welcome and gave us a brief but very informative history of Vietnam. Daniel was a fantastic tour leader, very friendly and polite despite the fact that there was very difficult and rude others, he kept his composure and remained gracious. We feel privileged to have had the opportunity to see this beautiful city, sample authentic Vietnamese food and to have met so many lovely people. Thank you again to Daniel and the team behind the Grabatour. We cannot wait to return to Vietnam for next time. highly recommended!

As a first time traveller I can safely say that the tour has met my greatest expectations and more. The tour leader have been supportive from the moment I arrived in Vietnam to the moment I left. The locations we visited such as Freedom Island and the Golden Bridge were amazing I won't be forgetting them anytime soon. The organised activities were so well structured that for me they have a first effort. I would like to thank Daniel for his crazy attitude, his ability to always be reliable for a night out, and for always making sure everyone was well looked after. I have not got one negative thing to say. Both extremely friendly and helpful. I've made lifelong friends and memories on this tour so I will be booking another trip in Thailand with Grabatour Travel once I am home. Thanks for everything!!

I’ve done a lot of tours in different countries around the world with various different companies and this has genuinely been the best tour I’ve done. This is mainly because of the very well thought out itinerary, how smoothly the tour runs in a very unorganised country, a wide range of awesome activities and having an quality group leader. I love how Grabatour Travel run their tours and the way they do things - it’s a great company to see a country with and I think the best in Vietnam. We had an awesome group of 15 people with a wide range of ages, nationalities and different expectations from Vietnam and somehow the tour suits all these people as I know everyone had an amazing time on the tour. I do think this is massively down to having a really great group leader, Nick. He gets involved with everyone on the group and tailors the already quality tour to suit everyone to ensure that everyone has a once in a life time traveling experience in Vietnam. For anyone who is weighing up between a few tours, chose this one! From my experience of many different tours I know how well this one is done and is as good as tours get

This tour was exceptionally well organised and coordinated. It was packed with fun and interesting things to do and everyone thoroughly enjoyed themselves. I’d say Grabatour Travel have a good understanding of what should go into a good tour, ensuring that all the hot spots are covered as well as having a few hidden gems. We covered a lot of ground in 10 days and it was exactly what I needed for someone with limited time off work. Daniel has an incredible attitude to life and people and his banter and energy fuelled our trip. He was always ready to help anyone and no matter how tired, would come out and have fun as well as dealing with all of our problems effortlessly. Thank you.

I’m so glad my friend persuaded me to go on the Golden Adventure Vietnam. This has been the most enjoyable holiday I’ve ever been on. I would never have been able to plan such an action packed & varied experience as Grabatour Vietnam have given me. The balance of travelling, down time, visiting cultural sites, activities & food experiences has been perfect. I have thoroughly enjoyed it. As a teacher I need to make the most of my holidays to get away from the stresses of school & this year Daniel the group leader has helped me achieve that. He has made this experience for me, through his energy & enthusiasm. A fun guy, passionate & hardworking. My favourite moment? Difficult to pick one because everyday has created a memory I will never forget. A friend of mine took a gap year a couple years back and when he returned from all his travels he said one of the most amazing parts of the world was the Oceania. When I began to think about taking a gap year, his stories from the Oceania inspired me to think about traveling in that area.

Later in the year, Grabatour Travel visited my school and they were promoting their trips in Southeast Asia and Oceania. When I saw that they had an organized trip to Oz, I decided it was something I should seriously consider.

Since it would be my first time in Oz, I felt going through an organized program and going with other people around my age would be a good idea.

I ended up talking to a couple friends of mine who had experience with Grabatour Travel and I never heard one downside to the program. In fact, some of my friends are even planning to try and work for the program fairly soon.

After being quickly convinced it was a tour I would enjoy, I made a booking and later found myself in some of the most amazing parts of the world with some of the greatest people I've ever met.

Literally, the tour is full of amazing activities and is very well-organized, so I had no worries at all. Most of the activities were things I would never have booked on my own but are things I'll remember forever.

Our leader, Daniel, was nothing short of spectacular. He made me feel welcome from the moment he picked me up at the airport, told me places to go and visit as I arrived earlier than the tour start date. He has been genuinely amazing the whole trip, and has made up most of my favorite memories since landing here.

The Grabatour Travel crew also helped me out on the Australian admin needs such as bank account, Tax file number and free SIM card.

Grabatour Travel is one of the largest student and youth online travel agencies worldwide. We provide awesome group tours and gap year adventure travels for young adults 18 to 39 across the globe in the destinations: Thailand, Vietnam, Bali, Australia, and New Zealand. Our talented team includes expert travel advisors, who provide our customers... END_OF_DOCUMENT_TOKEN_TO_BE_REPLACED