The “City of Eternal Spring,” vibrant and sprawling across a valley in the Andes, full of cuisines to sample and causes to support. A growing, modern city—home to thousands of indigenous people. Cochabamba makes an impression that will not soon be forgotten.

In this unique 10-week on the ground program, you'll take online classes at your home university, while living and working in the lively city of Cochabamba. You'll also have the option to take Spanish classes in Bolivia.

When you get to Cochabamba, the Amizade site director will help you set up your social action placement and weekly service. You'll likely be with an organization (10 hours a week or more) that focuses on one of these themes: I can't say enough about the great experience I had with Amizade in Bolivia. The staff did a great job at making sure we were safe and enjoying our work and recreational time as well. It was a great way to start off 2014. There are so many beautiful things about Bolivia. I can't wait to go back and see more of what we didn't have time for! If you have the opportunity, go!

What would you improve about this program?
The cost was pretty high. Also we were stuck in Columbia with very limited funds, it would be nice if Amizade had a back up plan for situations like that.
15 people found this review helpful.
Helpful 
Read my full story

Not only does Amizade have an amazing program in Bolivia with multiple sites, but you work side by side with people from another culture. Learning things about a culture first hand are always better than a textbook. Even if you don't speak spanish there is no problem communicating with other volunteers, but it's always helpful to know some spanish or know someone who does.

I had a blast working down in Bolivia, but the real treasure of Bolivia is the scenery. The Andes mountains are breathtaking (literally and figuratively). Go to Lake Titicaca or the Salt Flats, they are amazing sights to see.

This was the ultimate way to spend the final winter break of my undergraduate career. I saw so much in 10 days, fell so in love with Bolivia, and met so many people---I cannot fully express the immense impact this program has had on my life already. We did volunteer construction work on a community center, working side by side with the people who would benefit from our service. We ate together, we talked, we learned, we saw walls go up, beams come together--all with the silhouette of the Andes on the horizon. It was a surreal experience. So much positive energy, so much reflection. The creative writing class we all took (6 students) really helped harness that energy, and forced us to ponder big issues and tiny details all at once. It's great to see a study abroad option that is so focused on creating an equal exchange, and bringing different cultures and communities together for a mutually beneficial and enlightening experience.

Program
Amizade Campus Anywhere: Bolivia
Tessa Haneline is from Cleveland, Ohio. Currently she is a student at Slippery Rock University in Pennsylvania. Tessa enjoys staying active, experimenting in the kitchen, and listening to country music. Amizade is the product of hundreds of service-learning pioneers who have engaged in over two decades of programmatic and academic development; it is the result of never-ending efforts by communities around the world to welcome others; and it is an ongoing global movement by over 26,000 alums, and hundreds of thousands of others, to create a more... END_OF_DOCUMENT_TOKEN_TO_BE_REPLACED 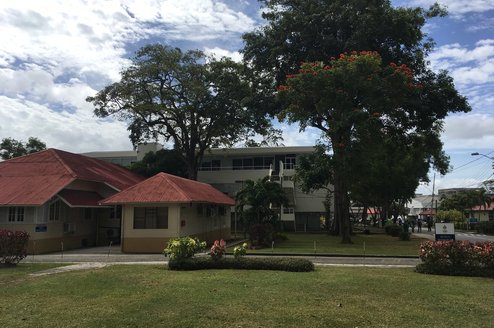 Italy
The province of Trentino in Northeast Italy stands out for its unique...
View Program