Join more than 8000 people from all over the world for our Angloville experience this year!

As an English speaker, you stay in one of our beautiful venues for 3 to 6 weeks and enjoy a series of casual conversations and fun-packed activities (games, workshops, city tours, etc). You are not a formal teacher: you are a partner for conversation while having a multicultural experience.

What you get in return:
• Free accommodation in beautiful venues across Europe
• Full board during your stay
• Free city tours in multiple cities
• A chance to connect with people from 20+ countries
• An opportunity to become TEFL-Certified (if attending 3 weeks) 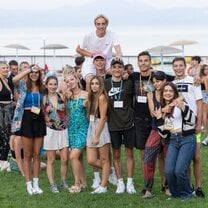 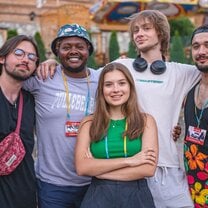 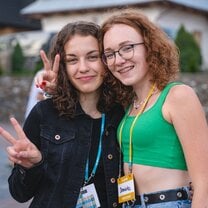 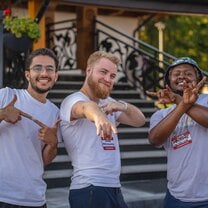 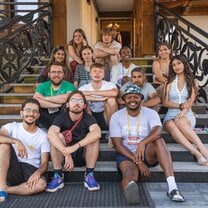 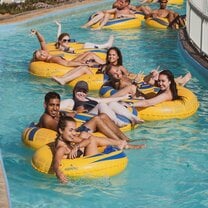 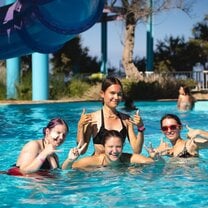 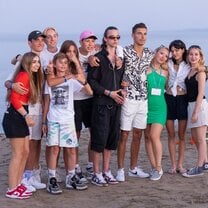 Angloville is one of the biggest providers of free educational & cultural exchange programmes in Europe. We offer a fun and intercultural experience during which international participants can discover 8+ European countries and meet locals for free: Malta, Italy, Greece, France, Berlin, Hungary, Poland, England, Belgium, and Netherland. Where do you want to travel to next?

Shape your teaching career with Angloville

Through Angloville programs and partly sponsored AngloTEFL training, we offer you the chance to shape your new career. We provide you with a practical teaching opportunity and TEFL training. Our 120h AngloTEFL training (accredited by TQUK, ACDL) is provided online by Premier TEFL. For the 3-week teaching practice, Angloville will welcome you in beautiful hotels in Europe, board and lodging provided free of charge.

I had an unforgettable experience at Angloville from start to finish everything was well organized, I made lots of friends and enjoy every single moment .The coordinators were really friendly and went about and beyond to ensure everyone had an amazing experience.
The accommodation was well located and spotless it has everything you will need for a good rest after days packed of adventures.
A great variety of food was provided and you also have a fair amount of breaks between sessions.
I highly recommend!

Did my first programme last week and it was great! It was in Poland and the area was beautiful with a lot more free time than expected. I would definitely go back for the winter programme. It also catered really well for vegans and allergies. All the native speakers were lovely and the polish participants seemed to enjoy themselves! Our co-ordinator, Lisa, was fantastic. I'm looking forward to the next one. I stayed in Chojnik and we did an excursion to the castle which was really good. Thank you angloville!

I can stress enough that this experience made the change I needed to my life. I had the pleasure of meeting so many new people, engaging in intellectual and insightful conversation. In meeting like minded people, it helped to develop my world view and this was all for free. Theres simply no reason not to go for this!

This provides a great way to add to your resume while creating lifelong connections. You spend so much time together that these people become almost a second family! I couldnt recommend this enough!

I did two one week programmes in Poland and a one week programme in Hungary this year with Angloville. I enjoyed my experience. The programmes enabled me to help Polish and Hungarian participants to improve their English and were fun. I got to socialise whilst also doing voluntary work and I received a certificate at the end of each programme. My coordinators Micah and Grant were friendly and very helpful. During each of the programmes, I had my accommodation and all of my meals paid for. I would recommend doing voluntary work abroad with Angloville to anyone.

It was amazing and experiential experience for me, i would recommed for those who wants to have work exprience while having fun. You can interact with different people and gain too much insight while exploring your qualities and lackings thats how you can know better about yourself too. Staff and overall activities , are amazing days are well organized , venues and food is also good , stay is accomodating for almost everyone. Students cooperate with mentors and you can have great exposure with them.

Although I have taken a part for only one program which lasted a week, I think I was able to get the whole experience of interacting with kids and meet new people. Talking with students for 8 sessions a day was tiring at times but I really enjoyed talking to the students and learned a lot from them too. It was worthwhile to receive such kind remarks from some of the students and how much the limited little times that we spent communicating left a valuable memory for them. My fellow mentors are good and nice people too.

Had an awesome time with all the mentors and mentees. I'd love to participate again in future. The venues are calm and beautiful. The rooms are also pretty good. I got a lot of friends in this program and the kids are also cool. One can enjoy a lot as well as teach at the same time.

What is your advice to future travelers on this program?
You will love the program from start to end. Be prepared to talk a lot and have a bottle of water with you always ;)
53 people found this review helpful.
Helpful 

I signed up for Angloville in summer 2021, when COVID is still a significant problem. The original program I signed up for was actually canceled because the country closed its borders due to rising numbers of COVID cases. I signed up for another program a few weeks later, and was promised they would follow local laws regarding COVID, including social distancing and masking inside.

Before leaving for the trip, I repeatedly encountered bad planning and lack of forethought on the part of the organizers. For example, I needed to get a negative COVID test in order to return to my home country after the program. I was going to fly out the day after the program ended, and the test needed to be taken 48 hours before flying out. So, I asked the organizers if COVID testing was going to be built into the itinerary on the second-last day of the program -- otherwise, I would have to leave during the day to go get the test, and I assumed other people would also need to take the test. The organizer was impressed that I had thought of that, because it had not occurred to the organizing team. For another example, I asked about transportation to the program location from the airport (an hour drive away), and they hadn't thought about that either. Only with prompting from me did they say they would look into it. Then, 4 days before the program started when I still hadn't heard anything, I looked into it myself and emailed them what I had found. They then thanked me for doing their job and forwarded that information to the other volunteers.

After flying across the Atlantic to get there, I discovered that not only were the program coordinators not following the laws, but they didn't care when I asked about it. I told them I was concerned about COVID, because I needed a negative test to get back to my country. They said, "Well, just don't worry about it," shrugged, and walked away. For reference, it was a group of about 60 people, who were mostly teenagers. I talked to the other program coordinator, who said, "They're teenagers, I can't tell them what to do." What a great attitude from someone who is in charge of a large group of teenagers.

The only positive experience I had was that the other volunteers I met were fun and friendly. Maybe Angloville should consider taking care of them better. I would not recommend this program to anyone.

What would you improve about this program?
Communicate better with your volunteers, and follow laws in order to keep them safe.
60 people found this review helpful.
Helpful 

Is it just for Europeans?

What is the minimum age requirement?

When are the closest dates for applying?

The two companies I have used for this so far are Angloville and VaughanTown. The enquirer needs to visit their websites and discover what the conditions are. There is availability throughout the year and quite often spaces available on trips at short notice that may not yet have been filled. Angloville has a Facebook page also. volunteers.grupovaughan.com/what-we-do/vaughan-town angloville.com I chose to do Angloville as I love to meet new people, travel and learn about new cultures. I really liked the idea of helping non-native English students practice and gain confidence in speaking over a one week stay in a hotel.

I did 2 weeks of volunteering on Adult programs in Poland and it was a fantastic way to meet Polish students, eat Polish food and see more of the country that I would never normally go to in my travels. It was also a great week to meet other native English speakers who were also mostly traveling Europe like myself.

I was already in Europe at the time and found Angloville through the internet. Everything seemed very organized on their website and it did turn out to be a very efficient company to volunteer with.

Angloville provides 1-week accommodation at a nice hotel (2 or 3 sharing a room) usually quite far away from the bigger cities in Poland and other nearby countries (plus transport to and from the hotel/city).

While on the program, they provide you with food (breakfast, lunch, and dinner) and water, tea and coffee. You just need to cover your flight costs to get to Poland, travel insurance, as well as your accommodation in the city before and after the program.

They also provide a city tour the day before the program starts, which was great to meet some of the other volunteers and learn about the Polish city!

Angloville is one of the biggest providers of free educational & cultural exchange programmes in Europe. We offer a fun and intercultural experience during which international participants can discover 8+ European countries for free, having their board and lodging in beautiful countryside hotels covered, while meeting young European students and... END_OF_DOCUMENT_TOKEN_TO_BE_REPLACED Travel across Malta and Stay for FREE in Beautiful Resorts

Malta
Stay in beautiful countryside resorts with all expenses paid while...
View Program 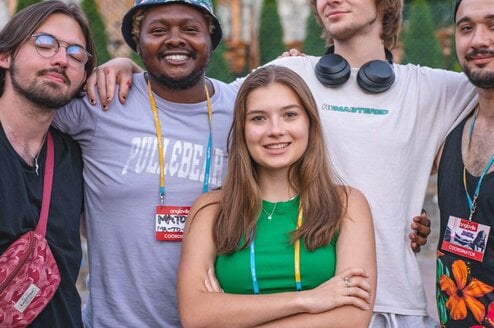