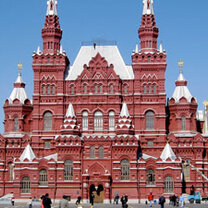 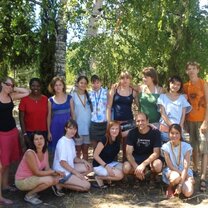 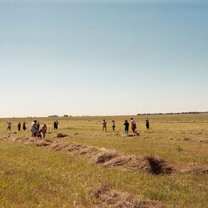 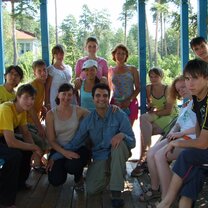 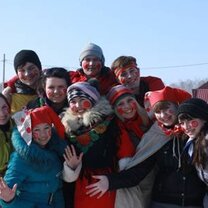 Volunteer and Language Programs in Russia Volunteer at Camp Iskra in Russia

In addition to the international volunteers, there were a lot of Russian volunteers. There were a women’s and a men’s Russian dorm, as well as our 11-bed women’s room and the 10-bed men’s room. So we had Russian as well as international volunteers. For showers, we had a 10:30 pm reservation for Monday and Thursday, as well as a 2-hour slot on Saturday after work for either a shower or the banya. When we arrived at the island, the women wore a skirt long enough to be below our knees and a scarf for the entire three weeks.
Our schedule was to work Monday through Saturday noon, then free time Saturday afternoon and Sunday, for three weeks. The men had the hardest work, baling hay, stacking hay bales, chopping wood, splitting wood, cleaning out forestations, demolishing shacks, stacking firewood. The women picked berries, whitewashed the cow stalls at the farm, pulled weeds from the gardens and walkways at different sketes, sliced apples, cleaned the chicken coop, and helped clean up the overgrown garden outside the monastery. One day I was sitting on one of the benches in front of the monastery, separating tulip bulbs from dirt (you have to lift bulbs in climates of snow and freezes), when some of the tourists walking by took my picture (long skirt, bandana), thinking they were getting a real Russian babushka. When I told the Russians, they thought that was terrifically funny! Most of the Russians were astounded that an American would travel so far to volunteer to help them. It also was a fact that I was more than twice as old as all but two women and one man. On one of our days off, we were invited to go by boat to visit two sketes. On the archipelago, there are ten sketes, housing from 2 to 15 monks. During one workday, it rained, so we took refuge in the newest skete--Vladimersky Skete. Inside, it’s highly decorated with icons,and I got some beautiful pictures.
I truly didn’t know what kind of people would be around me when I registered to volunteer. I didn’t know what they would think of me—an American female who was 64. But I’ve never been around so many kind, helpful, generous people, both on site and in transit from St. Petersberg.

What is the age limit ?

Hi Dan! So long as you are willing and able there aren't age restrictions. But volunteers under 18 years old are required to submit a signed Parent/Guardian Authorization Form prior to participation.

About what age was everybody there? If I'm 16 would there be other people my age?

Volunteer should be at least 18 years old.

Is it required to speak Russian?

I took a look at the website and it appears that English is the language spoken for a majority of the projects so no Russian is required. Here's the link if you have any more questions: https://vfp.org/2016/01/27/faqs/

Program
Volunteer Abroad in Russia with Volunteers for Peace

Why did you decide to volunteer with VFP in Russia? 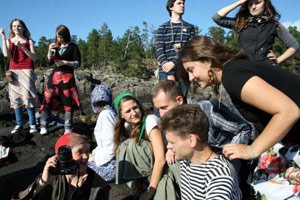 Pat: I first became interested in Valaam Island while looking for opportunities through Volunteers For Peace over a year ago. I had commitments then, but when I saw the project in March, I jumped at the chance. The pictures of the monastery were beautiful and I am always looking for photo opportunities.

Pat: Monday through Sat. noon, breakfast was at 8. All volunteers assembled in front of our dorm at 9 to receive assignments for the day. We worked at different things until 12 or 12:30. Lunch was at 1:00, work resumed at 2:00. Sometimes we were taken to our assignments by bus, sometimes we walked, depending on the location. The island has 10 working sketes in addition to the monastery; we worked at three of them, picking berries, weeding pathways, clearing planting beds, planting beds, pruning/maintenance of plants, and digging bulbs for the winter. The men had more difficult work--splitting logs, chopping firewood and stacking it, baling hay, stacking hay bales, demolishing old shacks, etc. 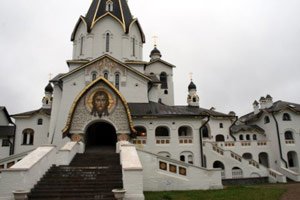 Pat: This experience gave me some knowledge about the Russian Orthodox religion and about Russians in general. I had only the best encounters with Russian people from St. Petersburg to Petrozovodsk to Sortavala to Valaam Island and back. The people were very helpful, especially when we didn't speak the same language. I'll try to send some pictures; the way my software works, they will be sent separately. Thanks for the interest. I can't say enough great things about Volunteers For Peace.

Russia is the largest country in the world, accounting for around an eighth of the worlds inhabitable land. Russia has had a bad reputation for a while, but when you go you will notice that feels more European than you might think and has a very similar value system.

Volunteers For Peace (VFP) is a U.S. based non-profit organization that operates within the global networks of the Coordinating Committee for International Voluntary Service (CCIVS), Service Civil International (SCI) and the Alliance of European Voluntary Service to provide meaningful cross-cultural engagement opportunities all over the world to... END_OF_DOCUMENT_TOKEN_TO_BE_REPLACED 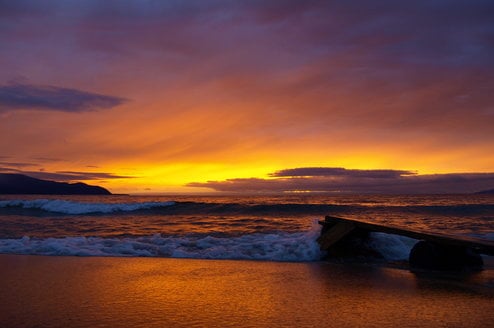 Russia
10.00 •2 reviews
Take up an adventure now and travel to the Great Baikal Lake found in...
View Program 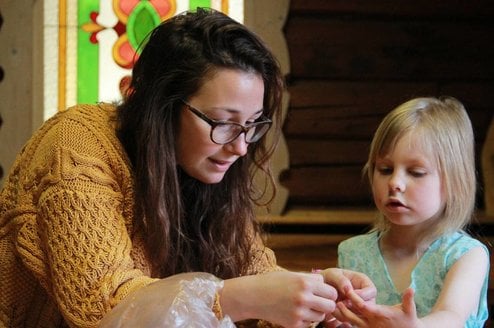 Volunteer in a children's community in Russia

Russia
8.00 •1 review
This is an exciting opportunity to volunteer in a children's community...
View Program 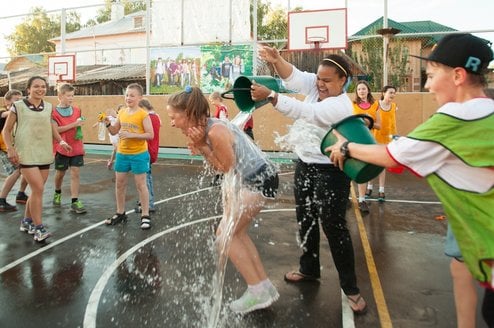 Russia
9.50 •2 reviews
Children on the English language camps are divided into groups and...
View Program