If you are looking for a hands-on Africa vet experience that is endorsed by universities internationally, you can join for a wildlife veterinary experience with our Vets Go Wild team led by Dr William Fowlds, a world renowned South African vet. Vets Go Wild includes game capture, translocation of game, the reintroduction of species into conservancies, diagnosis and treatment of disease, animal husbandry at the Born Free Rescue and Education Centre, predator monitoring and much more.

Our 12 or 16-day Vets Go Wild modules are aimed at students undertaking veterinary and wildlife based programs at university and qualified vets/vet nurses. The course provides training in the care of animals located on various Game Reserves in the Eastern Cape of South Africa. Animals that you are likely to be working hands on with include Rhino, African Buffalo, Big Cats, Cheetah, Giraffe and more. 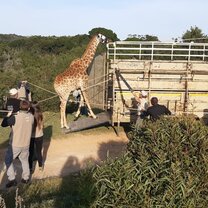 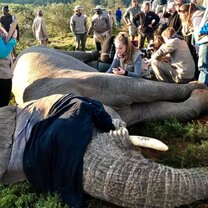 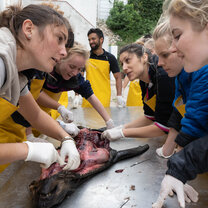 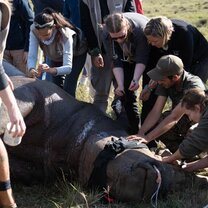 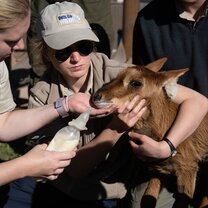 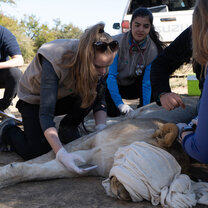 Get £150.00 off limited volunteer courses for qualifying dates in 2020/1
Vets Go Wild excluded

Wildlife Conservation Experience with the Big 5 in South Africa

Highly affordable programs in South Africa from $400 for 2 weeks!

The 12 days I spent in Amakhala with the Vets Go Wild team were some of the best 12 days of my life. Before booking the course I was worried about not getting enough hands on experience and, because of the structured nature of the course, not getting to experience the life of a wildlife vet - I shouldn't have worried. From the vet first day we were involved in procedures giving injections and treatments to a wide range of species always supported by a vet there to help should we need it. My group worked with Emily and she was amazing at giving us an insight into her life as a wildlife vet, both the good and the bad. Yes the course is expensive but 100% worth it and I haven't met anyone who's regretted spending the money so beg, borrow and steal your way to South Africa!!

The Vets Go Wild trip was without a doubt one of the best experiences of my life so far. I knew very little about wildlife medicine and I definitely left the program with so much knowledge and abilities. There's a lot of hands on experience and the veterinary staff is so knowledgeable that by the second or third day you would start thinking how to gather more funds to come back the following year. We work with a great variety of wildlife, learned how to perform multiple procedure, had lectures related to conservation, and were prepared by Dr. Fowlds the day before any procedure as well as discussing every procedure afterwards. It's an excellent experience and I would recommended to everyone. Furthermore, the food was great, we had 3 course meals every night, the lodge was exceptional, and the staff at the reserve was lovely.

Thanks so much for the wonderful Vets Go Wild review. We hope to welcome you back to South Africa in the future.

This experience was a dream come true, and just the first day was worth every penny I spent. Throughout the two weeks, we worked on animals like elephants, rhinos, giraffes, buffalo, hartebeest, roan, and lions. Before each hands-on experience, we were given a lecture on the specific type of animal, what types of medications to use, and how to keep ourselves safe. We were also given the opportunity to go behind-the-scenes at an aquarium in Port Elizabeth. There we learned about various marine creatures, and we did a necropsy on a whale that washed up to shore. Not only did I learn how to sedate and treat these animals, but I learned about the huge conservation role each of them plays. I also learned how important our role is. This experience changed my life, and it made me realize that we can truly make a difference.

What is your advice to future travelers on this program?
If you decide to do this program in the June-August months, make sure to pack warm clothes. I completely underestimated the Africa cold, and I had to wrap myself in blankets everywhere we went.
9 people found this review helpful.
Helpful 

Great to hear from you again. We're so glad to hear that you had such a wonderful time and we hope to welcome you back in the future.

Many Thanks for the review,

Vets Go Wild was the best experience of my life! Working with lions, rhinos, giraffes, and multiple species of antelope was a dream come true. I value this experience more than anything so far as a veterinary student. It was the most hands on learning I have had and I learnt so much from the Ikhala veterinary team in only 2 weeks. I made friends from all over the world because we shared this emotional life changing thrill of our lives in South Africa. This experience made me realize how much is involved with conservation and the responsibility veterinarian’s have to contribute to endangered animals. Veterinarians are the key, a crucial role, for wildlife to be in our future. I think that is the most amazing role in life to lead. It was truely a once in a lifetime experience to meet and learn from Dr. William Fowlds and the Ikhala team who are on the front lines of conservation every single day. It has inspired me to hopefully take on that same role as a future veterinarian!
-Sarah 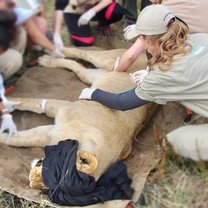 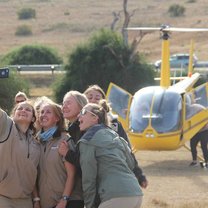 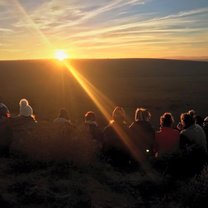 I had the most amazing time with vets go wild! The trip exceeded all expectations and the amount of hands on experience I got was next to none. All of the Ikhala veterinary team and lodge staff were so helpful and friendly it made me feel so much more at ease throughout the entire experience.
From lions to giraffe to rhino; it is without doubt the trip of a lifetime... totally unforgettable!
I would say to anyone considering this course to not let the opportunity pass you by... it is well worth the price and will give you so many transferable skills for working in veterinary even outside of wildlife.

What would you improve about this program?
It can’t! It’s amazing!
10 people found this review helpful.
Helpful  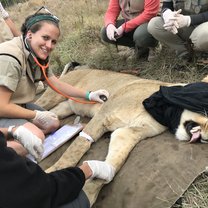 If you are considering this course as part of your studies, just book it.

I have had the time of my life out in South Africa, working with some beautiful animals, and more importantly, some amazing people. The course is incredibly hands-on from day 1 - the combination of this and lectures really proved a great way to learn.
I did this at the end of my third year and found the level of clinical work within my abilities (with some guidance of course!), and there were others who were in lower years who felt the same.

I went out to South Africa thinking that it would be a lovely 2 weeks, but I didn't see myself as a wildlife vet. I thought I was quite keyed up on the conservation out there, but after visiting and learning about the poaching crisis and more, I really didn't have an accurate view of the situation. I have come away believing that I can (& I now want to be!) a wildlife vet, and I feel that I have the knowledge now to educate other people about the sad reality that the African wildlife are facing. I couldn't recommend this experience more- I truly had the time of my life out there.

What would you improve about this program?
I think it could only be improved by letting us stay out there for longer!
9 people found this review helpful.
Helpful 
Read my full story

This was my first solo trip to South Africa and it was honestly the best experience! The course was incredible, no photos or words can do it justice; you learn so much so quickly, and all the staff are so helpful and friendly. I had only just finished 2nd year at vet school so I didn't have much practical experience, but that did not hold me back because the procedures on the animals are brand new to almost everyone so you are all in the same boat! I cannot recommend this course highly enough and I will be sure to return to this incredible game reserve one day, the work they do is phenomenal!

Vets Go Wild was the best thing I could’ve done for any summer internship/experience. I absolutely have no words to tell people just all the things I got to do, to see, and to learn! When they say that it will be hands-on, it really was hands-on experience every single day and moment! I've learned so much about African wildlife in such a short period of time, it's crazy to know it was only 16 days! Dr. Fowlds and the rest of his team are absolutely fantastic! I loved working with everyone and just seeing their motivation to help protect and serve African wildlife species. As a vet student, the experience allowed me to be more confident with my skills and tested my strength in working under pressure at times. I would recommend anyone interested in wildlife and conservation to sign up and go!

What did you enjoy most about your Vets Go Wild experience?

What are the requirements to apply to the program?

Hi Linda, please feel free to email us at enquiries@worldwideexperience.com if you haven't done so already, and we'll send you a comprehensive information pack. To be eligible for this project you need to be studying or qualified in Veterinary Science (includes pre-vet students, vet nurse students, vet students and qualified vets/vet nurses) and have a keen interest for conservation.

By Worldwide Experience on February 19, 2018

As part of our studies, we must undertake a certain number of weeks of placement. I am at an age where I am itching to travel, but my financial situation sadly doesn't agree. I thought a program abroad, working with animals (so it counted towards my total weeks of placement) sounded great!

I had attended a couple of talks by Will Fowlds previously and had seen the same course a couple of years ago on TV (Safari Vet School), so I began some research into it. This program was so highly recommended by other Vet students who all claimed that it was the best experience of their lives. I thought it would be silly to pass up this truly once in a lifetime opportunity.

The program provider, Vets Go Wild and Worldwide Experience, provided a structured two-week experience. I just had to get my own kit together (they provided a couple of clothing items), sort my flights (they organized transport to and from the airport on their side), get suitable insurance, and organize the appropriate vaccinations.

Worldwide Experience strives to conserve what man is fast destroying – our very own environment and ultimately our own planet. We are the specialists when it comes to wildlife conservation and offer scholars, students and the older generation the opportunity to work on some of the most incredible projects we are closely aligned with. Our programs... END_OF_DOCUMENT_TOKEN_TO_BE_REPLACED 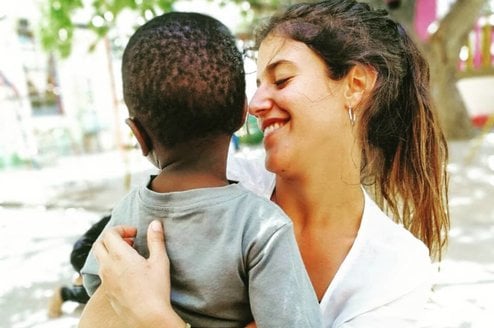 South Africa
9.72 •18 reviews
If you're looking for an adventure where you can make a difference at...
View Program 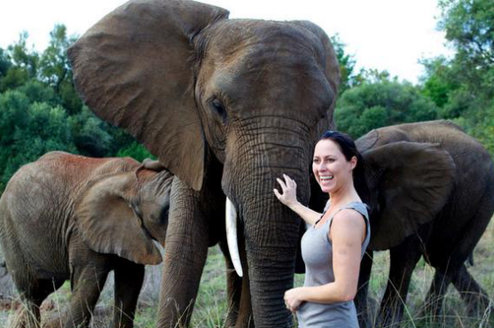 South Africa
9.47 •112 reviews
SAVE Volunteering is a Non-Profit Organisation. We are NOT a booking...
View Program