Skip to main content
Chris is from Kamloops, British Columbia, Canada. He is 20 years old and works in the hospitality industry and loves to travel and meet people from all over the world. 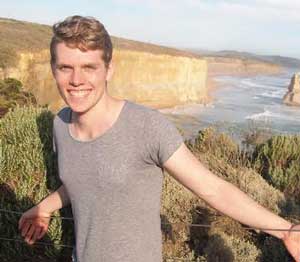 Chris: My favorite place that I visited was a place called Lorne. It was along the Great Ocean Road in Victoria, Australia, about a 3 hour drive from Melbourne. It was absolutely gorgeous there! There were wild cockatoos that were considered pests for the community, which I can understand as I managed to snag a video of three of them breaking into garbage cans and pulling out the bags and finding things to eat. It was amazing!

The beach in Lorne was awesome too! It was so clean and there were public use barbecues that we used to have some good food and drinks before going for a swim! It was absolutely beautiful, and I would recommend it to anyone!

Chris: One thing I would have done was travel outside of my city more. I only left on a trip twice, mainly due to work not giving me the time off and my own not looking for things to do. So I would recommend to people that it's easier to go out for a few days if you can get them off and experience as much as you can.

One thing I would have loved to do would be to travel to the Gold Coast rather than just stay in the Melbourne area, and it never happens, so if I could give advice on making sure you do something it would be to see as much as you can in the time you're there. 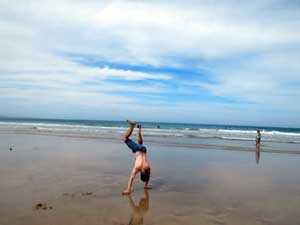 Tell us about an experience you had that you could not have had at home:

Chris: One experience I had in Australia that I could not have back home was staying out into the very early morning in a bar with friends after a late night at work. If an establishment has the proper licence in Australia they are able to stay open and continue selling alcohol until 5am. It's very different from back home where everything closes at 2am.

It's quite comical as well seeing the early morning people out for a run or going to work, and seeing the mix of those "up and at 'em" people interacting in the streets with those who have not yet gone home for the night. It's something very bizarre to see and experience and definitely something that would never have happened back home, or not nearly to the degree that it did in the city. 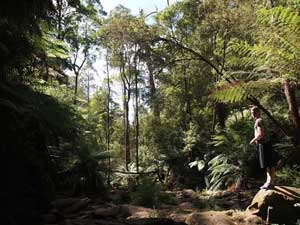 Chris: I feel that in my 6 months in Australia I really got a feel of what Melbourne was like. You get used to how the city works and the people in it, and at times it can be a shock when compared to back home. For instance the coffee culture in Melbourne is extremely prominent. Almost every corner has a little cafe selling some sort of espresso based coffee. All of them slightly different and everyone in the city seems to have a point of view on which coffee is good and which isn't. It's very interesting.

Another little area of Melbourne is very happy to tell you that a Starbucks opened and was closed within a year or two as their coffee didn't cut it. It's something very unexpected yet prominent in Melbourne culture that you wouldn't notice unless you were there for a longer period of time. I also feel as though I got to experience how busy Melbourne is as a city. Almost every week while I was there, some sort of event was going on, whether it was for food, art, sports etc, there was always something happening in the city and it was really great to experience.

The intern program is temporarily suspended while we work with country and employer specifications. In the meantime, we have ample opportunities to work in some of Australia's finest resorts and hotels. Please see visit Work Experience Australia. Secure an internship before you depart for Australia...