Skip to main content
Born in Mataró (Barcelona) but with Chinese parents, Xaxa was grown up in a Catalan family and knew just some basic Chinese language as she started learning the language a year before leaving Barcelona in Confucius School. That was her second time in China but the first one not in tourism and alone. 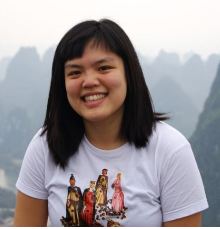 Xaxa: Hua Shan, totally! (not the same as Huang Shan, which I would also like to go some day). After finishing my study in Omeida my boyfriend came to visit me and we made a three-week tour around China. At the beginning, we were quite afraid of going because I’d read it had the most dangerous trail in the world and I couldn’t stop thinking I still had too many things to do before dying.

Anyway, we finally decided to go, and I am so glad we did. As I’m not used to go hiking it was quite a challenge for me and the journey was really tiring but after 8 hours walking I felt really accomplished once at the top. Besides, we also made a couple of friends, one of them from Barcelona, too.

Another place that surprised me in a positive way was Hong Kong, totally different from Mainland China.

What is one piece of advice you'd give future ​Omeida Chinese Academy students? 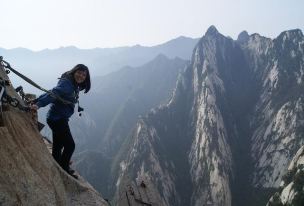 Xaxa: Studying in Omeida and living in Yangshuo is much more than learning Chinese. It is hard to explain, you have to experience it so don’t hesitate going. In Yangshuo you will not only be surrounded by an amazing landscape but also be taught by great teachers and staff who happen to be better friends. I would also recommend them to attend the weekly cultural class and join Saturday outings, as well as taking part into the language partner program, one of the best chances to learn more about Chinese people and culture.

Finally, if this is your first time in China, forget all you think you know about it and start observing. In China, I was surprised by the fact that many people didn’t know where Spain is and the ones that did it just knew about football and bullfights, which actually I’m totally against. That’s the same with China, it’s much more than all the preconceived ideas we have about eating dog or spitting into the ground (which actually they do a lot). And if English is not your mother tongue you will find yourself improving your English too!

Xaxa: Qiezi!! I still have to meet a foreigner who doesn’t love Chinese eggplant but it is not about the eggplant itself, is the way they cook it that makes it so great. I had never eaten that much of it before! Actually, in China you can find lots of delicious food but you have to choose well and if you do it, you can really enjoy their food. 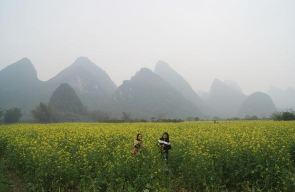 On the other hand, Chinese breakfast was my favorite meal so I would also say that roubao (meat steam bun) and qiancengbing (big fried pancake with spices) are a must-have.

Xaxa: I would rather say it was a cultural barrier as sometimes it was difficult for us to understand each other not because of the language we were using but because our ways of thinking and processing the information was totally different so we had to work harder to get what the other was trying to say.

Even though, that’s what I enjoy the most when learning from others as sometimes it is funny to see how influenced are we by the things that surround us and the way we were educated, even we don’t like to admit it. Push myself so as to understand others is one of the things that makes me grow as a person and, for me, the most beautiful part when travelling and meeting people.

Xaxa: I met lots of people when in China but also learn more about myself. Before leaving Barcelona I thought I would be a little bit homesick because it was my first time away from my family and friends and also because I was going to the other side of the world, with a total different culture, food, climate and everything.

But then turned out that I was really happy there thanks to all the friends I made and the amazing time we had together. I‘d never liked saying goodbye so, after all, it was really tough to leave Yangshuo as I knew meeting all my friends again would be quite difficult (but not impossible).