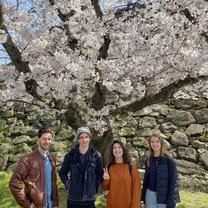 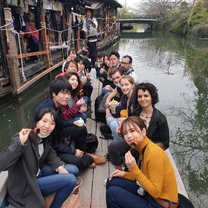 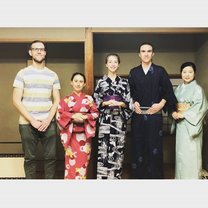 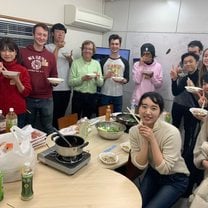 it is nabe party. 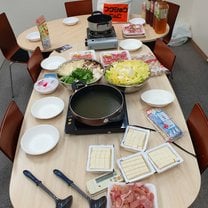 it is ready for nabe party 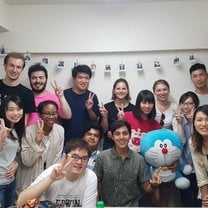 Some of the friends I made 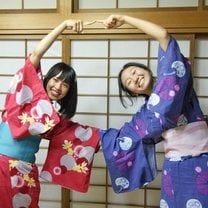 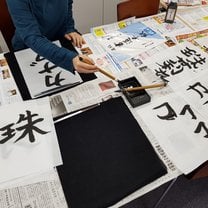 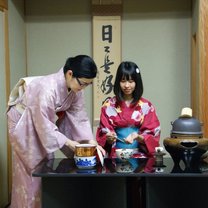 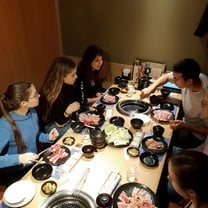 We went diner for the last day 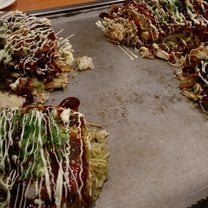 My favorite Japanese dishes so far! 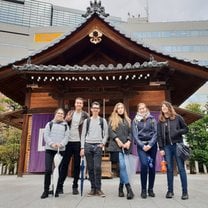 A temple in the center of Fukuoka 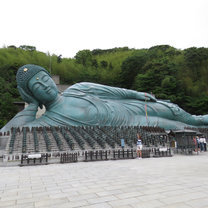 Meiji Academy is an independent educational institution offering a variety of Japanese language and culture classes to make sure students can study in a way that is efficient and fun! The standard courses offer 20 classes per week. Classroom lectures along with training in real-life settings allow you to become accustomed to using actual spoken Japanese. Courses range from complete beginner to advanced speaker. Meiji Academy also offers intensive Japanese courses where students take up to 24 classes per week and have a private teacher to help focus on personal needs.

Japanese business classes and internships are also available. These courses are for people who plan to do business in Japan or with Japanese clients. The course focuses on Keigo (Japan’s business language), the Japanese business mind/manners and business role-plays.

Meiji Academy has a very good way of handling classes. You are very flexible and the lessons is very good. I personally feel like I learnt a lot in a short amount of time. Its good to have a Japanese teacher in Japan because that way you can only speak in Japanese or English and not your own language which is very good for making progress. My teachers were very kind and I enjoyed working with them. They prepare lessons very carefully and adjust it to your expectations and level. So, you can learn a lot if you are willing to invest the necessary time and work into studying. If you like Japan and the language, you will have a good time

The online study program with Meiji Academy was awesome. The teachers were lovely and the classes were really interesting. I wish I could have taken more classes but my schedule was already full of my own business. Speaking of which, I appreciated that I was able to adjust my class schedule according to my availabilities.
I attended each one of the classes with pleasure. The teachers were always smiling and encouraging me whenever I failed some exercise or something, they were very supportive! I liked that we focused on conversational Japanese and also that they gave me some homework to do. My Japanese level improved so much thanks to these amazing people!

I should have said it directly to my teachers, but I really wanted to say thank you for all the joy and the great times I had during the online classes with Meiji Academy. It was more than just Japanese classes; we became friends and we could talk about so many different topics, we had so much fun together even though we never actually met in person. I really hope we can meet someday when I come to Japan. And then I'll show you that your hard work during the classes is worth it <3. I will keep studying Japanese every day just like we did over the last two months. I'm glad that I had the chance to meet you guys!

Their teaching approach is excellent and very professional. Now I can understand and communicate in Japanese which is truly amazing! Meiji Academy encourages and motivates every student to give their best and it pays off. I really appreciated their work and their patience with me when I didn't understand something or needed more time to work on specific grammar. This past month has been wonderful, it was so motivating to attend the virtual classes and learn new stuff every day. I knew I was doing the right thing getting closer to my dream of speaking Japanese fluently. Thank you, guys!

I had been working in Japan for several months already in an import/export company, and it bothered me that I wasn't able to speak Japanese properly. I mean, it's quite convenient that everyone in my company speaks English, but I just couldn't make any progress in Japanese even though I was living and working in Japan. So I signed up for classes with Meiji Academy and finally got a solid knowledge of Japanese which it's amazing! This school is great, the teachers are talented and nice and it was a very good use of my time. I made new friends in Fukuoka and they showed me many places I didn't know. Taking these classes was definitely the best thing to do! 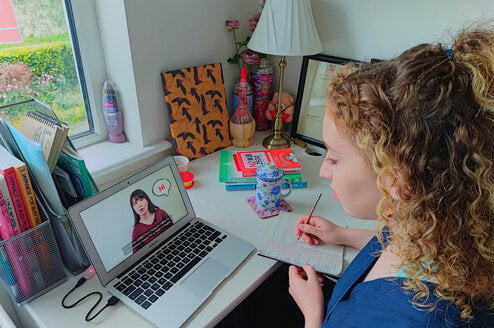 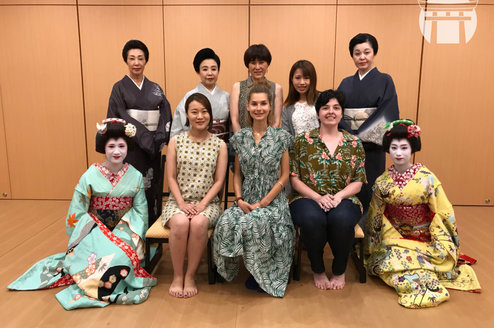 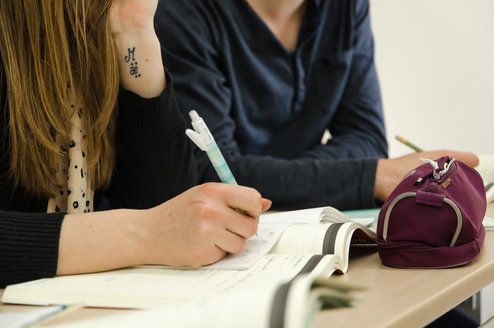 Japan
9.67 •12 reviews
Whether you want to work in Japan, to fully understand its culture or...
View Program 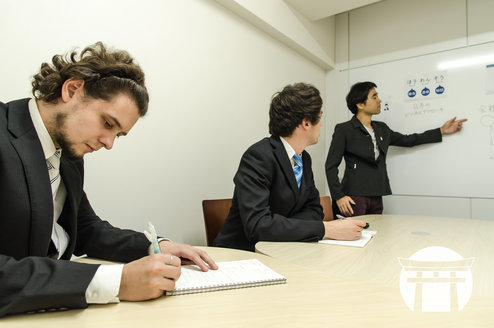 Japan
9.60 •10 reviews
Japan is the third largest national economy in the world in terms of...
View Program 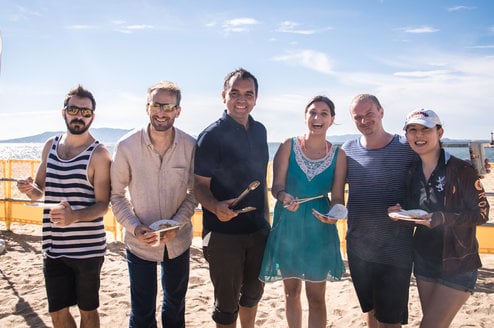 Japan
9.71 •7 reviews
Could you imagine yourself leaning on Fukuoka’s sand beach while...
View Program 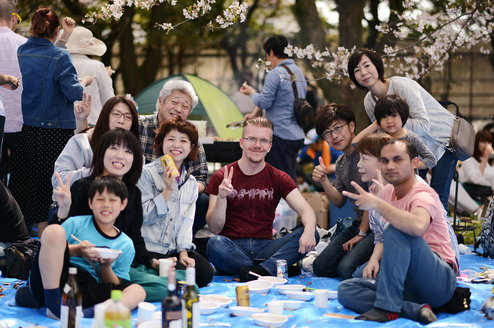 When I was looking for a language school in Japan, I wanted to be in a city with a nice environment and have flexibility in my course. Meiji Academy met both of these requirements. Lot’s of language schools require you to stay for around 1-3 months or over a year, but with Meiji Academy you can decide exactly how many weeks you need and can also customise which classes you want to take. They also have a school in Fukuoka, which I found was the perfect city to live and study in without being too overwhelming.

Meiji Academy helped with organising accommodation, being picked up from the airport, and doing events and tours to explore the city and Fukuoka lifestyle. However I had to sort out things like my visa, SIM card, and transportation. They give you advice in these areas but in the end you’ve got to figure it out yourself, which can be a bit confusing in a different language.

Program
Japanese Traditional Culture Study Abroad Course in Fukuoka
Job Title
Japanese Teacher and Cultural Event Organiser
Osafumi has a background in Architecture and studied fashion in Paris for a few years. He started off by learning French in Paris; that is when he realized his passion for Japanese culture and he wants to spread this to the world through his fashion and by teaching Japanese.

My favourite travel memory as when I was studying overseas. I had the opportunity to travel most of Europe and experience the differences in culture and traditions between Europe and Asia. That made my sense of pride as a Japanese stronger and I was determined to return to Japan and make an impact on people’s lives after this.

Ever since working for Meiji Academy, I was able to share my passion for the Japanese culture and language with the students I have interacted with, which has deepened my understanding on how international students perceived our culture to better organize future cultural events based on their interests.