A typical street corner scene in Beyoglu, a district of Istanbul

Suleymaniye mosque. One of the biggest and best mosques Istanbul has to offer

By directly enrolling at Bogazici University—Turkey’s most competitive university—for seven weeks over the summer, you can fulfill graduation requirements or try out a new discipline through a wide variety of course offerings. As you settle into the University, our on-site IES Abroad staff in Istanbul is there to support you whenever you need it.

Studied aboard in Bogacizi University, Istanbul in Summer 2015. The staffs of the program were so friendly and always available for help. Before our school started, we had trip at Ephesus, Izmir. And we had basic Turkish language lectures, and they were so useful and practical to "survive" in Turkey. Beyond the classroom, IES also conducted many workshops and walking tours to help us to embrace the local cultural, religion and history. People who are considering study aboard should try IES!

What would you improve about this program?
Maybe conduct more walking tours before the school starts. A couple walking tours had to be cancelled because the students had to prepare for their exams and homework next day.

One of the best things about the program are the staff centered at your location. They drop in roughly every 10 days to see how you're doing/take you on informative walks around neighbourhoods you might otherwise not see. They're not consistently breathing down your back, which gives you time to be independent and do your own thing. Istanbul itself is beautiful, and you will NEVER run out of things to do in that country! The housing was in an amazing location - you were in a non-tourist Turkish neighbourhood, helping you really immerse more. The university was beautiful and my classes were challenging, but very interesting too. The only difficulty I encountered was adjusting to the predominantly Muslim country - especially being a girl. You have to be a little more aware about the signals you give off regarding the clothes you're wearing, but Istanbul is a big metropolis. So, while you will encounter some unfriendly people the majority of nice people who are willing to help you out make up for it!

Suleymaniye mosque. One of the biggest and best mosques Istanbul has to offer

A typical street corner scene in Beyoglu, a district of Istanbul

Program
IES Abroad Istanbul Summer Turkish Language & Culture
Kimberley Donohue went on an 8 week program through IES Abroad to Istanbul, Turkey, from June to August this year. Kim is a 21 year old International Studies major and Political Science Minor at the University of Kentucky. She was born and raised in the United Kingdom for 13 years, before moving to Texas and South Africa for a few years each. Kimberly: A lot of people think the studying abroad experience ends once they get on the plan back home. However, studying abroad opened up a number of avenues for me I wouldn't have even realized could happen.

For example, after my program, I was nominated by my program advisor in Istanbul to become an ambassador for IES Abroad. It is a year long project where I am an ambassador for my program, and it involves anything from meeting IES staff and tabling at study abroad events, to answering prospective students questions about the program.

I also became an ambassador for my Education Abroad department at my school - giving presentations to students about my experience, and helping students find their perfect program.

The experience also opened me up to the field of international education - something I wasn't thinking about beforehand but am now considering a career in.

Kimberly: Completely. We had the option of living in a dorm or an apartment and I chose the apartment. We were situated in a very Turkish neighborhood - we were the only foreigners in our neighborhood. This allowed us to immerse a whole lot more than those living in the dorms. 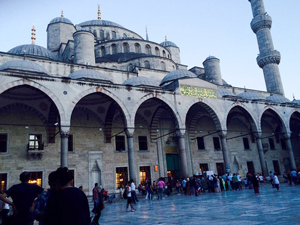 For example, we had to grocery shop, navigate public transport, and sort out a daily water delivery to our house - things people living in the dorms never had to do.

One of my highlights was a huge festival on our street for the a night of Ramadan. A table seating about 300 people was set out on our street, and we were allowed to come down and eat food and meet our neighbors.

This was our most immersive experience, and we met neighbors from Iran, Turkmenistan, and from other areas of Turkey. Once again, something people in the dorms didn't have the opportunity to do, and it made me grateful for choosing the more independent option of living in an apartment.

What was the best place you visited outside of your home city?

Kimberly: Without a doubt, Cappadocia (or Kapadokya to the Turks). A region in central Turkey which is full of natural beauty. The landscape consists of "fairy chimneys" and mountains which consist of soft rock - ideal for digging into. The area is culturally and historically rich - it was where Christians fled the persecutions of the Romans thousands of years ago.

They began digging into the rock to create a sort of underground city. This has resulted in some of the most beautiful painted frescos inside the rock, as monks came and began to build monasteries into the rock. It is one of the most popular places to hot air balloon because of the moon like landscape. 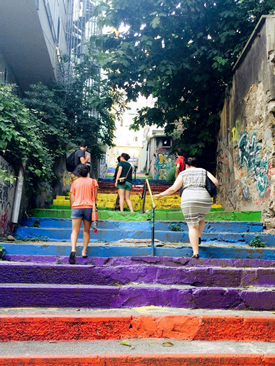 So, we dragged ourselves out of bed at 3am to get on a hot air balloon and watch the sunrise. Although my wallet was a lot thinner after the hot air balloon ride, it was the most beautiful experience I've had in a long time and I will never forget it.

Kimberly: I was in Turkey in the midst of the Syrian refugee crisis - tensions were high because the Turks didn't like the influx of hundreds of thousands of Syrians into the country. My roommates and I were trying to get back from a touristy area one day when we made a typical tourist mistake - getting on the wrong train. After about 40 minutes we realized we didn't recognize anything we were passing.

Our puzzled faces must have given us away because a man came up and asked us if we were lost. He ended up getting off the train with us and leading us on the right train back home. Through conversation with him I learnt he was an anesthesiologist in Aleppo, when he was tired of "getting hit by stray bullets", so he moved to Istanbul with the clothes on his back and what he had in his bank account.

In America, I could have heard the same story on the T.V., or read it on the Internet, and then turned my T.V and computer off and forgotten about it. We're fortunate enough to be able to do that. But having a conversation with someone who was a direct victim of the issues I read about regularly was an extremely eye opening and humbling experience that I definitely could not have experienced anywhere else. 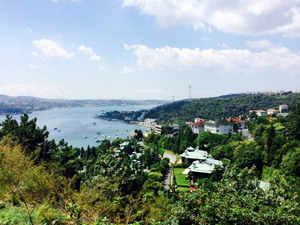 What did your provider do for you and what did you have to do on your own?

Kimberly: My provider, IES Abroad, helped a lot with the more technical issues of things. For example, they sorted out the payment we had to make to the university, planned five days of orientation for us when we got there (which included flights to other areas of the country, Turkish lessons at another university, among other activities) and our director we had in Istanbul was extremely helpful.

He was a Turkish PhD Professor who checked in with us once a week to see how we were doing and if there were any questions or issues we had. He took us on neighborhood walks every few weeks, and his knowledge of Istanbul and Middle Eastern politics combined with his friendly and outgoing disposition was a great way to get everyone settled in and comfortable with their new environment.

Save to Wishlist
3
3
IES Abroad

Our curriculum takes full advantage of Andalusia and all southern...