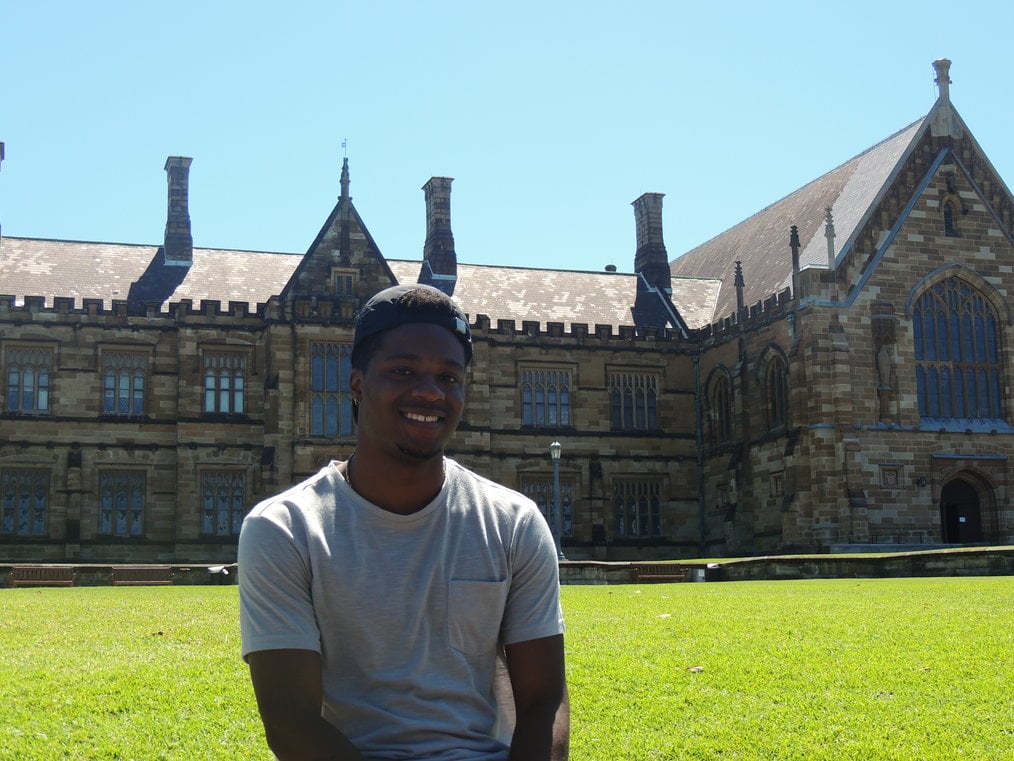 Growing up, traveling abroad seemed like such a privilege. Sure I had friends and family who went on vacations outside of the U.S. to the Caribbean, Mexico, or Canada but beyond that I was under the impression that you needed to be pretty well off or had to save up for a vacation abroad for ages before the big trip. So when I began my college search, in the back of my mind, I knew that I was going to make studying abroad for a semester happen. Lucky for me I ended up at Elon University where studying abroad and building an international awareness are a big part of the school culture. More than 65% of students study abroad at least once during their time at Elon.

During the 2010 - 2011 academic year only 4.8% of African-American college students studied abroad, according to a report summarized by the National Association of Foreign Student Advisors (NAFSA). I am an African-American who studied abroad during the spring semester of 2010. On January 16, 2010 I boarded my first flight ever, which was a Scandinavian air nonstop flight to Copenhagen, Denmark. My mother is terrified of flying so anytime we traveled flying was out of the question. My mom’s fear of flying never really rubbed off on me, when I told her I wanted to study abroad she made some offhand remark about flying. I’d already prepared my rebuttal for any comments or possible questions she had about everything from my desire to board a plane to what it would cost us. My mother couldn’t deny that I had a well-researched plan and I wasn’t backing down from the idea of studying abroad. Studying abroad was probably one of the best decisions I made my entire four years of college.

I’d like to share things I wish I knew before I studied abroad as an African-American and a few other tips for making the choice to study abroad a bit easier.

Ladies and gentlemen people will be curious about your hair. My advice to the ladies is not to be afraid to wear your hair in any style that you would normally wear at home, whether it’s a curly fro or synthetic braids. I wore my hair primarily in high buns, but every so often I wore my hair in a curly fro. Sure, I might notice a few people observing me and my hair a little more closely out of curiosity, but no one ever seemed to react in hostile or uncomfortable way.

I would often get compliments on my hair from strangers that my friends and I ended up chatting with while we were exploring new places. Depending on how you manage your hair and how long you are abroad maintaining it may be a little bit of a struggle, if you are used to going to your hair stylist regularly for trimming, cutting, retwisting, etcetera.

2. People Will Try to Guess Your Nationality and Family Ancestry

For some reason, some people will try to assume or guess what your nationality is. While I was abroad, I was sometimes pinned as being from one several Caribbean islands and countries in Africa before anyone would guess that I was just African-American. I don’t know why people are so eager to trace my roots to a specific place.

I simply equated this to the fact that Europeans often encounter blacks with roots in specific countries in the Caribbean islands and Africa. On the other hand, some Europeans interactions with African-Americans who have lived in the States for several generations who cannot trace their roots are much less frequent.

3. Be Ready to Chat Race Relations and Politics

A lot of people outside the U.S. are fascinated by our government, laws, current issues and the entire political makeup as whole. In my experience, especially in Denmark the number of Danes are well versed in American politics and current issues. Some of your new local acquaintances may ask you tons of questions about where you stand on some issues and why.

The national news in Denmark often mentioned at least two major headlines from current events in the U.S., which were typically politically focused. So be prepared to share your political stance on things and address any current issues.

4. You May Get Stared At

Not only are you traveling as an American, which often warrants looks from the locals in any foreign country. If you are easy to spot sporting tons of college paraphernalia, a monogrammed backpack, Sperry’s boat shoes or other trendy apparel and accessories in the States some people will definitely notice. In addition to apparel, your voice can also trigger stares in public when you are with other Americans or your new international friends chatting at a cafe.

More than a handful of times I’m certain I threw a lot of people off when I had to ask people if they minded speaking in English at the grocery store checkout or on public transportation if I needed directions. I definitely witnessed a couple of priceless facial expressions filled with surprise. This will happen to every American regardless of your ethnicity.

5. Scholarships Are Out There For Us!

People often equate going abroad for a semester with being too expensive and this statement is only partially true. For African-Americans that notion likely comes up a lot more often as a deterrent for college students. There are a number of resources available to help students afford studying abroad including funds from your home university, a potential host university or study abroad program and other organizations that support international study.

Some study abroad organizations have scholarships or grants available for minorities and first-generation college students, for example Diversity Abroad has several scholarships to increase the different types of students studying abroad. Also, depending on where you choose to study the cost of living and the semester tuition may be lower than spending a semester at your home university. No matter what the cost is to study abroad, once you’re serious about going abroad start saving as soon as possible because the more you save the better.

After reading through all my advice listed above and you still find yourself a little apprehensive about studying abroad than I suggest approaching someone you know who has studied abroad. Find other African-Americans from your university and ask them to grab lunch with you to pick their brain about their experience studying abroad. I’m certain most people wouldn’t mind discussing their experience abroad over a meal and they may have had the same reservations that you do before deciding to finalize their semester abroad. Reading reviews of study abroad programs by past participants can also help you make a more informed decision.

My mom's fear of flying never really rubbed off on me. I'd already prepared my rebuttal for any comments or possible questions she had about everything from my desire to board a plane to what it would cost us. My mother couldn't deny that I had a well-researched plan and I wasn't backing down from the idea of studying abroad.

Studying abroad allowed me a unique opportunity to learn about myself personally and professionally, in addition to the chance to learn about other cultures that I was less familiar with. That one semester in Denmark, later led to my return to Copenhagen after graduating college to work as a temporary online marketing assistant for the organization that I studied with. Optimism and the desire to gain a deeper understanding of your host country are necessary components for anyone going abroad so try to push your assumptions aside.