El Templo de Debot. One of my favorite places to visit in Madrid. (Photo take by Ana Londoño).

Visit the “Pearl of the Carribbean” before it changes forever. Journalism immersion in the local Cuban lifestyle, residing in two of its most emblematic cities, both of them declared UNESCO World Heritage Sites: Havana and colonial Trinidad.

Except for the director there are no professionals. The topic of my articles was chosen by the director and I was asked to write that everything was marvellous at Roostergnn. Moreover, I wrote just a few articles per week because my main task was to reaching out to universities facebook pages with advertisement of Roostergnn. We weew also asked to leave positive comments on the social profiles of Roostergnn.

I am a Visual Communications Arts major and I went into this internship with little-to-no background in journalism. I decided to apply because I have always being interested in using writing to promote knowledge availability, but knew that I would never find out whether I was suited or not for the industry unless I was part of it (even if it was for a short period of time). At first I was very intimidated by my peers because they were mostly journalism students and graduates. However, the program is designed to improve the abilities of those with prior knowledge and to teach the fundamentals to people new to journalism. The seminars start off with the very basics of good writing and attractive articles, and systematically moves on to more specific skills like web-writing and the tasks of a foreign correspondent. I had a great time with the mentors, all very knowledgeable and interesting people, and the locations visited gave us great insights of the world of journalism at different scales.

I would recommend this experience to anyone curious about the intrinsic values of journalism regardless of their experience in the field. You would get insightful knowledge from experts on-site and during the seminars which will lead to both your personal and professional development.

Last summer I had the immense pleasure to go to Madrid to embark on a journalism course specifically intended for wannabe journalists from all over the world.
When I was chosen to go to the sunny capital of Spain, I thought: "This is simply unbelievable! I'm gonna be writing about Arts & Culture in one of the most beautiful cities on the planet".
In a matter of time, on July 3rd 2016, I was on a plane to go to Madrid and I was extremely scared because I didn't know what to expect. Little did I know it would be one of the greatest experiences in my entire life.

At RoosterGNN Academy, a non-profit organization that supports journalism education worldwide, I gained lots of skills in terms of writing a news, an op-ed or reporting an event.
Everytime I was at the Academy I felt like a true journalist and that's mainly because the other journalists-to-be and me used to discuss ideas and how we were supposed to make our articles original, appealing and unique.
Our experts & mentors weren't university professors teaching journalism in a classroom, they were real journalists with a lot of experience and a lot of passion for their job.

Martin Roberts, the first mentor I got to meet during the seminar, has been working as a freelance journalist in Madrid for four years, in which time he has reported for five UK broadsheets. Before coming to Madrid in 2012, he has worked as a correspondent for press agency Reuters for 16 years, covering many topics such as, politics, current affairs, the environment, culture and economics. He has also got to interview the likes of George Bush, Fidel Castro and the Dalai Lama.
Mr. Roberts taught me there were three steps to write the perfect news: to be quick, clear and concise.
I was given a story and I had to write it again, paying attention to the numbers of words I was writing. It was definitely a tough job but it gave me so much confidence as I wasn't very keen on writing in English. I can proudly say I'm not afraid of writing an article in English and that's all thanks to Martin Roberts.

The second mentor I got to meet at RoosterGNN Academy was Spanish journalist Patricia Rafael Lage. For more than 14 years, she has been working and contributing as a reporter and fixer for five newspapers, El Día de Valladolid, ADN, Público, Eldiario.es and The New York Times; two digital websites, VICE News Spanish and Broadly Spain; and a weekly magazine called La Clave. She has covered a great variety of topics, ranging from politics, health, immigration and cultural affairs.
Ms. Lage taught me the difficulty of being a fixer for the New York Times: basically fixers have to gather data and infos, arrange interviews, be constantly up to date with the latest events. It's definitely a tough job.

Unluckily I didn't get to meet Benjamin Jones, who has been reporting on Spanish politics, culture, travel, sports, economics and business for the foreign press. He covered the Middle East, the former Soviet Union and the Gulf War. Furthermore, he has also worked for The New York Times, United Press International, The San Diego Union-Tribune, CNN International etc. I'm pretty sure he offered an international perspective to his students.

Another fantastic experience I wasn't able to live was visiting El Mundo's newsroom (one of the biggest and most popular Spanish broadsheets) and El Matadero Madrid (a cultural hub set in the Arganzuela district). There are absolutely two highlights of RoosterGNN's journalism internship seminar.

After my workshops with RGNN journalists, I was ready to write my four articles. I wrote about the current summer tunes, the biggest music events across Spain, the upcoming Harry Potter script book and Giuseppe Tornatore's latest movie "The Corrispondency". Before writing I had to explain the idea behind eacharticle to Pablo, our friendly seminar coordinator, and to my fellow journalists in training. That made me feel like I was working in a proper newsroom.

What I extremely liked about this journalism internship seminar was the international environment I was working in: I was living my dream with a great bunch of people coming from England, Latvia, Bulgaria, Austria, Romania and the USA, I improved both my English and my Spanish and I enjoyed Madrid and its history, its architecture, its culture and its people. Spanish people are incredibly nice, open-minded and they're constantly trying to make you feel at home. So if you like travelling, meeting new people and you would like to become a skilled journalist in the near future, you need to trust your instincts and embark on a marvelous adventure in Madrid!

During my summer I had the opportunity to travel to Madrid, Spain. The excuse I gave to my parents was that I was going for an internship/seminar in the field of journalism, which is what I study. However, my time at Rooster GNN became much more than just an excuse to travel to Europe. Since the first day I got to interact with very influential people in the industry but it just got better every day. I learned so much from my mentors and got great feedback on my writing skills. Moreover, the seminar opened my eyes to new career paths I had never thought about, such as becoming international correspondent or a fixer. The course was only two hours a day, which allowed me to have plenty of time to visit the city and try local restaurants.

What would you improve about this program?
I would have loved for the program to last longer. However, I understand that there is another longer option in Cuba.

El Templo de Debot. One of my favorite places to visit in Madrid. (Photo take by Ana Londoño).
Read my full story

I chose this program because I had never had the opportunity to improve my writing and speaking skills in an international environment for more than a week.

My university didn't assist me. I did it all by myself by keeping in touch with RoosterGNN Academy.

Since working with ROOSTERGNN, I have become increasingly skilled at communicating across different cultures. As a global news agency, ROOSTERGNN currently has more than 700 contributors from all over the world, from the Ivory Coast to Singapore, from Venezuela to the United States and Canada, and of course, in Europe, where we have our corporate headquarters in Madrid, Spain.

The ROOSTERGNN Academy similarly attracts both students with an international profile, as well as students for whom it is their first time abroad. We are thus very conscious of making every student feel at home from day one, and turning their program abroad with us into the experience of a lifetime.

During one of our last programs, one student came up to me at the end of one of our hands-on journalism workshops, very excited. If she hadn’t had a big smile all over her face, I would have been worried because she was so fired up, she almost ran into me.

“Andoni, I finally found it (her future career path): I am going to be a travel writer!” she exclaimed.

“Great!” I answered, inquiring, “So did you figure that out right now?”

“Yes, Andoni, right now, during the workshop. It just clicked.”

It is moments of realization like these, when I feel truly honored to be part of a non-profit organization that not only promotes freedom of expression worldwide, but helps aspiring journalists find their future professions, and pursue them with hands-on tools and feedback they received from experts at ROOSTERGNN Academy.

With over 700 journalists worldwide, ROOSTERGNN specializes in investigative, independent and digital journalism.

Committed to training the next generation of journalists, ROOSTERGNN has its own Academy (RGNN.org

END_OF_DOCUMENT_TOKEN_TO_BE_REPLACED 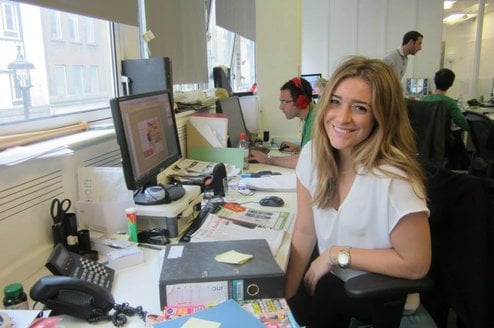 It can be difficult to stand out in a career field as competitive as...