Skip to main content
Alexa Stroh spent a semester at sea from January 19 – May 2, 2012. She is now pursuing a master’s degree in international affairs with concentrations in U.S. foreign policy and global gender policy at the George Washington University. Alexa hopes to become a consular officer in the Foreign Service. 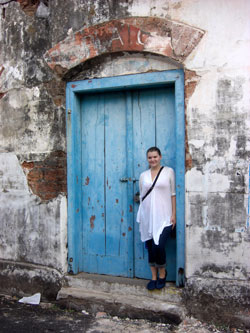 Alexa: I received my undergraduate degree in International Affairs. Before I went on Semester At Sea, I had studied abroad in Denmark (for a year) and Egypt (for a semester). I chose to study abroad on Semester At Sea because I wanted to have a global comparative experience and get a better sense of the world as a whole – not just one particular region of the world.

Alexa: My biggest piece of advice to future SASers (and really anyone studying abroad) is to engage yourself with the world around you as much as possible during your voyage. This sounds pretty obvious, but there are different ways to travel. Your voyage will fly by, so it’s important to take every opportunity you get.

Disconnect from technology as much as possible (other than keeping a blog or journal), befriend other students, and, most importantly, engage with people you meet in the countries you travel to. Semester At Sea is not a vacation, and it should not be used just to travel to tourist attractions or hang out with Americans. It’s an opportunity to learn about other people and cultures. 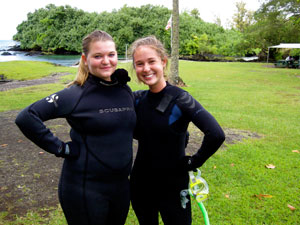 Alexa: I believe my experiences on Semester At Sea helped me get into my graduate program at the George Washington University, which is one of the best universities in the United States when it comes to international relations. I became interested in becoming a foreign service officer after living in Egypt in 2010, and my Semester At Sea voyage reaffirmed that this career path would be right for me.

One of my classes on Semester At Sea (called Multiculturalism and Women’s Rights) made me interested in topics such as sex trafficking, which has led me to focus on global gender policy at GW. At the very least, Semester At Sea has changed the way I perceive the world – something I could have never gained from a textbook. 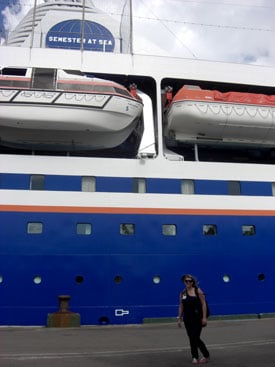 Alexa: Semester At Sea is a study abroad program unlike any other. While most programs require you to live and immerse yourself in one culture, Semester At Sea focuses on a global comparative education. Life at sea is a culture of its own, but you must also learn to adapt to the constantly changing environments as you explore a new country every week or so.

While at sea, you take classes – sometimes up to six days each week and on weekends. This is so you can explore while you’re in port. For the most part, students have free reign while they are in each country, but each class will require you to participate in field labs. For example, I went snorkeling in Dominica for my marine biology course. When I returned to class, the professor told us which species of fish we saw and what role they play in the ecosystem.

The Semester At Sea community has been one of the best social environments I have lived in. Being on a small cruise ship with very little access to phones or the Internet make it easy for people to disconnect from technology and connect with the people around them. While it’s extremely easy to make friends on Semester At Sea, students will also have access to varying clubs and activities. Clubs are created on board at the beginning of each voyage. There are also a lot of activities to participate in, such as Neptune Day, the Sea Olympics, listening to various speakers, fitness classes, etc. It felt like there were endless events to go to.

Explore multiple countries around the world while earning up to 15 credits! Each voyage varies in its destinations, but will definitely provide a wide range of cultures and countries to see. Check the Semester at Sea website for upcoming programs, review classes offered and discover funding...