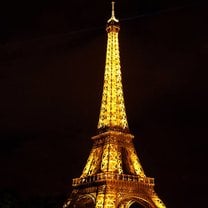 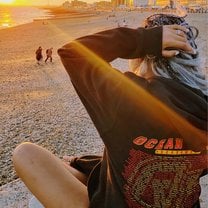 Brighton Beach located near the University of Brighton campus 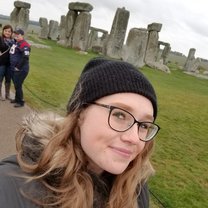 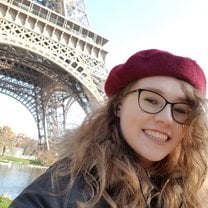 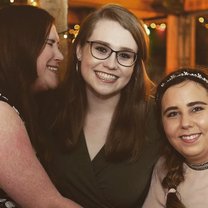 The 2 best friends I made in Brighton 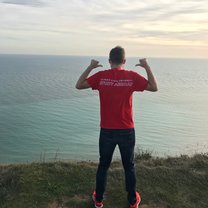 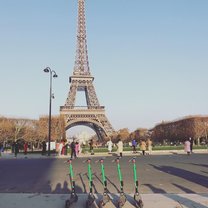 We took the additional trip to Paris, and it was amazing! 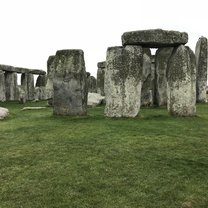 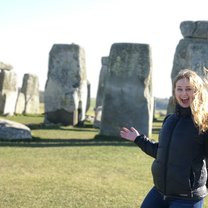 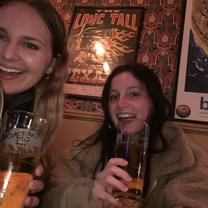 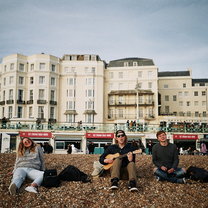 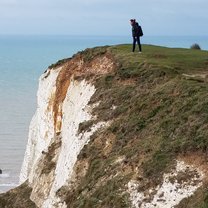 Brighton is in the middle of South Downs National Park, where you can spend all day hiking and the White Cliffs of Dover are located. 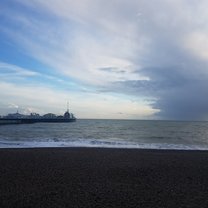 View of the English Channel and Brighton Pier where you can play carnival games and ride on carnival rides. 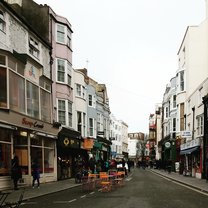 The Lanes district in Brighton where most of the restaurants, pubs and cubs are located. 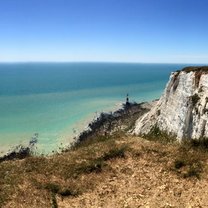 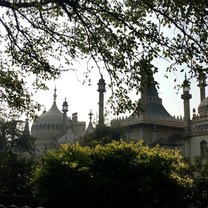 The University of Brighton is a community of over 21,000 students and 2,600 staff based on five campuses in Brighton, Eastbourne and Hastings.

Our Study Abroad Programme offers international students the opportunity to enroll in a variety of courses across the different schools for a semester or a year.

Both the city and university are very diverse, offering something for everyone. Brighton is located on the South East coast with easy access to Gatwick, International Airport.

Studying abroad in Brighton was one of the best decisions I've made. Both the included and optional day and weekend trips are really well planned out, cost effective, and super enjoyable. They were my favorite part of my experience and having so many of them is really unique to this program.

Brighton itself is a really unique and eclectic city that's really focused on its student population from the two nearby universities. There's bus services all throughout town, and a direct train to Gatwick airport that only takes about 45 minutes. There's plenty to do both inside and outside the city!

What is your advice to future travelers on this program?
Take advantage of every spare moment! There's lots to do in Brighton, in London, and throughout the rest of the country.

As someone who had never left my home country before studying abroad, I can understand why someone might have doubts about attending somewhere foreign and how it might be scary. Fortunately, at the University of Brighton, that isn’t the case. The staff makes sure you feel at home and you understand everything you need to know before you even realize that you haven’t thought about it yourself! I personally am not an extroverted person, but I was able to gain lifelong friends and I am currently maintaining those relationships while I am back home. I would NOT exchange this experience for anything. Go to University of Brighton and live out the dream you deserve! Happy travels to all! 💛

What is your advice to future travelers on this program?
Don’t waste time, it goes by so much quicker than you think!

Brighton Beach located near the University of Brighton campus

I highly recommend everyone to study abroad at the University of Brighton you will not regret it! The support at the university is incredible from professors to Mary and everyone at the Study abroad office, to the caring accommodation staff. I honestly did not have a single bad experience in Brighton! Brighton is such a lovely place and there is always something fun going on or somewhere to explore. There's the Brighton Pier, the Royal Pavilion, the Lanes, the festivals in May, also so many shops to visit and eat at. I think a semester was not enough time for me (do an academic year!). During my semester, I had the opportunity to travel to other countries so that is something to keep in mind when planning (I visited 8 in total). I will cherish my time and memories in Brighton forever and Brighton will always have a special place in my heart.

What is your advice to future travelers on this program?
I would highly recommend everyone to sign up for the field trips. They are so worth it! It's all planned out so all you do is hop on the bus and enjoy the trip. Each trip is an incredible experience and it's a good time to bond with everyone in the group. Some of my highlights from my semester at the University of Brighton have been from the trips and the memories that were made with them. Aside from that watch out for the seagulls!

Doing this exchange has been far greater than I had ever imagined. Brighton is an incredible place to live and study. The city is exciting and unique and has always got something going on. Coming to a new University and immersing myself in a different learning system was a bit daunting at first. However, studying here has opened up so many opportunities for me as a Graphic Designer. It was also a great opportunity for me to step out of my comfort zone and meet new people. I have met some incredible and talented people during my time here and have had so many amazing experiences. The study abroad team at Brighton are so lovely and supportive. I’m so glad that I chose to study in Brighton for a whole year as I absolutely love it here. I definitely recommend this program!

What would you improve about this program?
Absolutely nothing! Everything was fantastic and I highly recommend this program.

At the University of Brighton, there is not a divide between faculty and students. Students refer to faculty by first name and faculty know the names of their students. Faculty are always willing to provide support in a timely manner and in any way they can. The small class sizes and discussion-based seminars make the relationship with professors more personal and friendly, rather than strictly professional. Professors are willing to provide feedback on essays and discuss any issues before, after, and outside of class. However, the support from professors is outweighed by the outstanding study abroad office. I can honestly say that I owe my amazing experiences at Brighton to Mary, Becca, Elissa, Zoe and the study abroad team. Their endless kindness and support is heart-warming. Studying abroad is stressful, especially if you are like me and are a first-time traveller; the study abroad team was always prepared to answer all of my questions and provide me with all of the details. The student support is one-of-a-kind; I have not ever experienced a support system like it, not even at my home university. Everyone wants you to succeed at the University of Brighton.

What is your advice to future travelers on this program?
With Brighton being on the coast, there is always something to do. The pier is only a short bus ride from campus. You can find just about everything there from hundreds of fish and chips shops to a mall you can get lost in to the movie theatre to pubs. The city even has historical significance as the location of Henry IV’s vacation home, the Royal Pavilion. Since we are on the coast, we have high-speed winds and hangry seagulls, but even those qualities make memories whether it be losing your hat to the wind or your sandwich to the clutches of a seagull. Future travelers should go out and experience every aspect of the wonderful city that is Brighton.
View All Reviews
Displaying 1 - 2 of 2 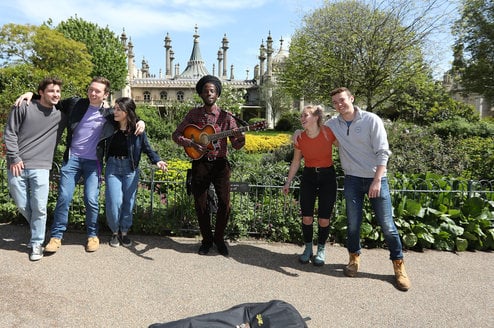 58 reviews
Save to Wishlist
University of Brighton

We offer semester and yearlong program, with the opportunity to take... 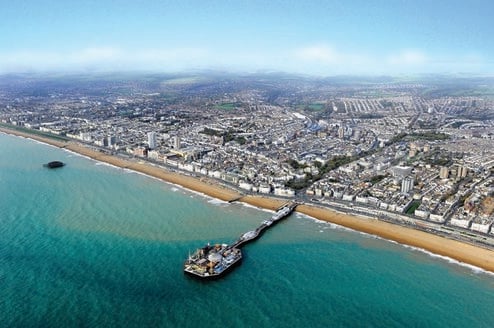 14 reviews
Save to Wishlist
University of Brighton

Summer School at University of Brighton

Program
Study Abroad at the University of Brighton, England
Becca Dwyer is in her fourth year at California State University Northridge with a Major in Graphic Design and a Minor in Marketing. Currently working as a Graphic Design and Web Development assistant, she is set to graduate in Spring 2018. When she's not working or studying, she likes to watch animated movies and work on her own illustrations.

Aside from the fact that they offered courses beneficial to my degree, the University of Brighton offered many included field trips that were very enticing to me.

I was also drawn to this specific program by the town of Brighton, itself. With it's close proximity to a pebble beach and only an hour train journey to London, it seemed like the perfect location.

I was pretty much on my own throughout the whole process, but since I knew that I wanted to study specifically at Brighton through USAC, it wasn't a huge problem. I know that students who have the USAC program at their school have a pretty easy application process.

A cruise up the coast of Norway past the Arctic Circle and dog sledding with Huskies in Tromso where there was an ice hotel. I got to experience the Aurora Borealis. It really was a once in lifetime experience and one of the incredible natural wonders of the world that I feel so very fortunate to have experienced.

It’s been fantastic to work directly with students to really do all we can to have a positive impact on the student experience. When we took our JSA and ISU Spring semester students to Paris; this was the last trip I attended with them before they returned to their hometowns back in the USA. It was gorgeous to see how much they had grown both as individuals and bonded as a group since I first met them at the beginning of the semester. We work really hard to create bespoke programs for our students and it’s great fun and it’s given me a real passion for the service that we provide.