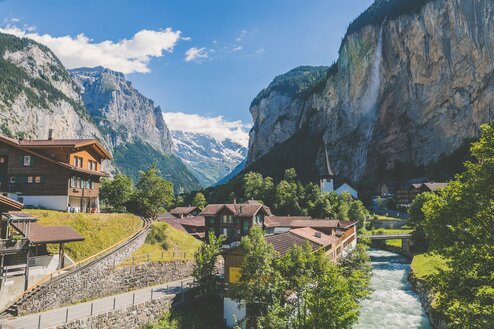 Switzerland, a landlocked country in the heart of Europe, is one of the most beautiful countries in Europe. It has always been at the forefront of innovation, commerce, and science. As such, it is no surprise that it has also produced some excellent universities. Switzerland offers international students an excellent education at some great institutions.

It has stunning natural scenery, incredible cities, and rich history. The country has so much to offer that it can be hard to decide where exactly you should go. You need to consider many things when choosing a university in Switzerland, but this article will help you find the best universities in Switzerland for international students.

Switzerland is a great place to study abroad because:

ETH Zurich is one of the most prestigious universities in Switzerland and one of its oldest. It was founded in 1855 by Swiss Federal Councilor Jacob Burckhardt and has since become known as “the cradle of innovation” because it has produced some of the greatest minds in science and technology.

The university is in Zurich, Switzerland’s largest city, with a population of about 400,000. Consequently, ETH has a relatively smaller student body size of approximately 10,000 students. The primary language of teaching at ETH Zurich is German; however, most master's programs and doctoral studies are also offered in English.

In particular, ETH Zurich can count 21 Nobel laureates, 2 Fields Medalists, 3 Pritzker Prize winners, and 1 Turing Award winner (the Nobel equivalent for computing) among its alumni – including Albert Einstein himself! As such, you can expect to be taught by exceptional professors with plenty of real-world experience to offer students interested in pursuing their passions at a high level.

This university also boasts an international reputation: with over 10% of international students attending exchange programs or graduate studies every year (many from Asia), it's safe to say that if you're looking for a stimulating cultural experience while also learning valuable new skills, then this might just be your ideal choice!

Swiss Federal Institute of Technology (EPFL) is a public research university in Lausanne, Switzerland. The second largest university in Switzerland after ETH Zurich, EPFL has 18 faculties and schools. It's also one of the most diverse universities in Europe, with students reportedly coming from over 125 different countries and more than 50% of their professors coming from other countries around the world.

Their campus is next to Lake Geneva, which provides students with access to many exciting musical opportunities, including concerts at nearby venues such as the Victoria Hall or L'Auditorium Stravinsky, all-year round.

In addition to its numerous academic offerings, EPFL has over 20 sports teams that regularly compete nationally against other Swiss universities throughout each academic year.

The University of Zurich (UZH) is an internationally recognized university located in the city of Zurich. It offers a wide variety of courses and programs that can be completed by both local and international students. The university has over 28,000 students from all over the world studying there, including more than 2,000 foreign exchange students who come every year to study at UZH.

The top subject categories at this university include Anatomy & Dentistry, Medicine, Physiology & Pharmacy, and Psychology & Neuroscience. Some of these courses are taught in English to international students who wish to study at this institution. However, most courses are taught in German or French (depending on the faculty).

The city life combined with great academic opportunities makes the University of Zurich ideal for international students who want to study abroad. Zurich offers many events and commercial opportunities for students, and its scenic surroundings allow for plenty of outdoor activities such as hiking or biking through the mountains or along Lake Zurich.

The University of Bern is the oldest in Switzerland, founded in 1460 as a school of theology. Today it offers over 100-degree programs and has 18,576 students from all over the world.

The city is listed among those cities offering excellent quality of life worldwide. The people of Bern are welcoming to students, and the old town of Bern, nestling in a breath-taking setting surrounded by the Swiss Alps, is listed as a UNESCO world heritage site.

The Swiss capital also has a broad range of cultural activities available for students at every level; these include operas, plays, concerts, etc., which take place throughout the year at venues such as Theatre Royal (completed 1779), Stadtcasino Theater(built 1883), Théâtre Municipal or Konzertsallee Concert Hall (both built between 1900 - 1915).

Considering its rich history, it’s no surprise that this university has been ranked as one of the ten best universities in Switzerland for international students!

Basel is also home to two other universities: the University of Basel and the University of Applied Sciences and Arts Northwestern Switzerland (FHNW). Furthermore, the city itself is known for being beautiful as well as having many cultural attractions such as:

Founded in 1537 and one of the world's top 100 universities, the University of Lausanne (UNIL) is ranked #2 in Europe and #3 in Switzerland. It is home to over 20,000 students from more than 100 countries who enjoy a stimulating environment that encourages learning outside the classroom.

UNIL offers a wide range of programs through its three faculties: Life Sciences & Medicine; Humanities & Social Sciences; Science & Technology. Some of Switzerland's leading academics teach all courses in French or English. In addition, the university has campuses at Plainpalais (the original site), Renens VD, and Epalinges VD, which house several research institutes, including an observatory and botanical garden.

The International Office provides support services to all international students throughout their time at UNIL. Student societies offer social activities such as sports clubs and cultural groups so you can make new friends quickly!

Known for its high-quality research and education, as well as its numerous international academic partnerships, the University of Geneva is an excellent choice! The university is located in the Swiss city of Geneva, ranked one of the top five cities to live in by several publications.

In addition to its strong reputation, though, what makes Geneva so appealing to international students is its unique location—the city itself sits on an island surrounded by lakes and mountains.

The school was founded back in 1559 by John Calvin as a theological seminary and law school. It remained focused on theology until the 17th century, when it became a center for Enlightenment scholarship under professors such as John Locke and Voltaire who taught there. Today, it has a student body of over 17,000 students from 120 countries worldwide!

The University of St. Gallen (HSG) is a private university located in St.Gallen, Switzerland. It was founded in 1898 as a business school and has consistently ranked as one of the best universities in Switzerland since its establishment. It has a long history of being one of the top Swiss universities and currently has around 12,000 students enrolled at the institution. The university has been included in several international rankings, including Shanghai’s Academic Ranking of World Universities (ARWU), Times Higher Education, and QS World University Rankings.

The university is known for its business, economics, and law programs. As an international school with a strong focus on research and teaching in these fields, it offers several opportunities to become involved with industry leaders during your studies or after graduation through various exchange programs or research assistantships offered by faculty members.

In addition to its academic programs, HSG also offers executive education courses taught by faculty members and external experts such as CEOs from major companies around Switzerland and from abroad, such as Harvard Business School professors who teach executive education programs during their summer breaks.

Get ready for your Swiss adventure!

Switzerland's higher education system is highly ranked globally, as are its universities and colleges, and international students have a wide range of programs to choose from taught in English. The country also has a reputation for being safe—a consideration when studying abroad.

Switzerland offers good opportunities for studying abroad because it has a high quality of life (so you'll be able to enjoy your time there) and good employment prospects after graduation.

We hope this guide has given you a better idea of the different types of universities in Switzerland and how they fit into the Swiss education system. If you still need help deciding where to study, don’t worry; there are plenty of resources online for international students who want to study abroad in Switzerland!