From ancient Ambrosian chants to cutting-edge multi-media installations, Italy has always been at the forefront of musical innovation. As a music student in Milan, you have the opportunity to work with world-class musicians, soak up the local music scene, perform at a variety of venues, and attend a wide range of performances.

Whether you’re fluent in Italian or you can only say ciao, you are welcomed with open arms by the IES Abroad Milan Center staff. At the Center, there is a full range of opportunities for instrumentalists, vocalists, composers, and performance majors, and partnerships with the Civica Scuola di Musica, the Conservatorio G. Verdi, La Verdi Symphonic Choir and Orchestra and more!

In Milan, you get an education tailored specifically to your musical needs and interests. Enjoy being surrounded by some of the world’s top musicians and educators—including the Center Director who is an active composer and music scholar whose pieces are performed worldwide!

IES Abroad Milan was an amazing experience. I truly feel like a know Milan and every part of it after leaving. It has become my city, I can use their public transportation, interact with locals, and feel at home. The academic feel was very different from my home university, but still, Milan was the perfect place to study abroad. There was a great balance in historical and cultural experiences and more modern experiences, with it being the fashion capital of the world. I could have lived in Milan forever, the advisors and my apartment location were great.

What would you improve about this program?
The program definitely needs help in balancing its program views and making sure they are the same standards as the teachers. Sometimes the teachers did not understand that we are here to experience culture and travel and learn, and not be stuck doing hours and hours over the weekends doing homework. The schedule could also be much more flexible so students could have more time to travel elsewhere in Europe.

The Duomo at night - a great spot to hang out

The IES Abroad Milan - Music program is great. The director of the program is very helpful in finding different music opportunities for students in the city, and I ended up taking voice and organ lessons, singing in the La Verdi choir's performance of Verdi's Requiem, and soloing in Rossini's Petite Messe Solennelle. The courses were great, both those I took at the IES center as well as the course I took at La Scuola Civica, a conservatory in the city. I'm so glad I went.

What would you improve about this program?
Communication about what courses were available before I got to Milan was unfortunately sub-par, but things became clear after I arrived.

Milan is an incredible city, especially for a musician. IES makes sure you will not miss out on any of the amazing musical opportunities that the city has to offer. Participating in this program is one of the best decisions I've ever made, and I would recommend it to anyone looking to expand their musical horizons.

Milan's music program is something to be envied. Though the program usually comprises about 20 students, I was in a group of only 7 musicians, which honestly only improved my experience. Because of our small group, we were able to take advantage of incredible musical opportunities such as performances at La Scala (including the premiere of Berlioz's Les Troyens for only a 25 euro co-pay), Scuola Civica, il Conservatorio G. Verdi, Auditorium di Milano, and other smaller venues around the city.

Though primarily a student of music history and theory, I was also able to take voice lessons for no additional cost with an incredible instructor, Patrizia Zanardi, and audition for Milan's LaVerdi Coro Sinfonico, with which (whom?) I performed Benjamin Britten's War Requiem in a performance space comparable to Lincoln Center's Alice Tully Hall - by far the most challenging piece I've ever attempted, and in an all-Italian environment.

In addition to my music classes and extra-curriculars, I took two Italian classes - language and literature. Both were challenging (especially the literature class) but ultimately were the best language classes I've taken (after two years of Italian back home), and while I'm not fluent, my language skills improved greatly across the board.

Bottom line: if you're a musician and you are motivated, the IES Milan staff (especially the director, Roberto Andreoni) can help to make whatever you need or want to happen. If you're only going abroad to take a break from school and go to a different club every night, you're in the wrong place. It's a great music program but you need to take the first step.

What would you improve about this program?
I think the Milan program suffers from a lack of funding. The housing options are incredible, as well as the location, but the center itself is pretty low-tech, with the printers and wifi are functional about 60% of the time. These shortcomings are not the fault of the staff, however, and are certainly not something that would stop me from returning.
Read my full story

Program
IES Abroad Milan – Music: Voice, Composition & Instrumental
Kate Delaney is a senior at Fordham University’s Rose Hill campus in the Bronx. She plans to graduate in May 2015 with a major in Music and minor in Italian. During her semester abroad, she participated in IES Abroad’s Milan - Music: Tradition & Innovation program in the Spring of 2014. 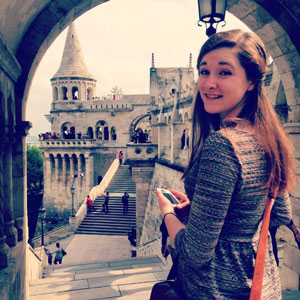 Kate: When I started thinking about studying abroad, I was an English major and my plan was to go to University College Dublin. However halfway through my sophomore year I switched my major to Music, which allowed me to consider non-English speaking countries.

I had taken four semesters of Italian for my school’s language requirement, and decided that I might as well put two years’ worth of classes to good use. Milan was the only music program in Italy that my school offered a partnership with, and I was lucky that it turned out to be a great program.

Kate: Absolutely, yes. My first couple weeks in Milan I felt like I was speaking in code whenever I talked to someone. I’ve studied Spanish and Irish (no, not Gaelic, Irish) as well as Italian, but was unaccustomed to holding a conversation that lasted more than a five-minute class exercise.

I took two classes entirely in Italian, as well as two individual studies (music theory and voice lessons) conducted in a mix of English and Italian.

By the end of the semester my language skills were worlds better, though it usually took a minute or two of me stumbling over my words, if the question was more complicated than “dov’é il bagno?” or “un cappuccio e un brioche, grazie.” 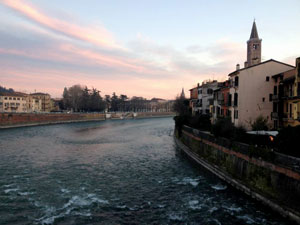 Do you feel you got a chance to see the city from a local’s perspective?

Kate: Definitely. Milan is the second-biggest Italian city, but it belongs much more to its locals than its tourists. Locals do speak English, but you won’t get far without any Italian.

When I visited Rome, I was consistently annoyed by shopkeepers insisting on answering me in English, even after I asked them questions in Italian.

Beyond language, though, I lived in an apartment building with Italian families, shopped at a local grocery store, walked to class every day, and sang Benjamin Britten’s War Requiem with il Coro Sinfonico G. Verdi, peopled entirely by the Milanese.

I became really familiar with my own neighborhood, the Duomo area, and the Navigli district, where rehearsal was held. 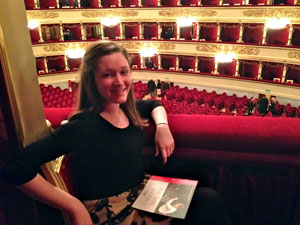 Kate: No, I don’t think it did, and I don’t think that’s a problem. Study abroad seems to be the part of your life where you go, and come back saying that traveling changed you, and oh, you just couldn’t imagine a life without [cultural practice from whichever country you went to].

It all sounds a little pretentious, if you ask me. Like, okay, we get it, you spent a couple months not in the United States. Good job.

I worry that people place too much stock in having a life-changing experience that they can look back fondly on for the rest of their lives, as well as report to their friends ad nauseam upon their return. I worry that this expectation detracts from the purpose of studying abroad - you know, learning how a different culture lives and works, and how you fit into that culture.

I’ve been told I seem more independent now, maybe because I was planning my own trips, booking hostels, conversing in another language, etc., but I don’t feel my worldview has shifted or increased.

I think my parents and my Jesuit education did a good job of encouraging me to look beyond my immediate community and pay attention to the whole world. It didn’t take going to another country for me to realize that people don’t all live like Americans.

Save to Wishlist
3
3
IES Abroad

Our curriculum takes full advantage of Andalusia and all southern...